Because it is Lana del Rey’s 30th birthday (ah, youth!), it’s time for me to post a few photos of her performance at the Governors Ball music festival earlier this month.

The three-day, four-stage festival takes place on New York City’s Randall’s Island, and I was there for two days with my concert-going friend Jessie. We spent Saturday, June 6, pretty close to the front of the big GovBallNYC stage. I loved that set-up. There was an aisle down the middle which meant that there was a whole lot of fencing to hold on to. Having a barricade to lean on is great when you’re spending a long day on your feet. Also, we were able to lean over the fence and into the aisle, which gave us an unobstructed view even though we weren’t in the front row.

That day, I was psyched to see Marina and the Diamonds do a longer set than the mini-performance we caught at the Rough Trade record store in Brooklyn in March. I’m getting really obsessed with Marina’s new Froot album, and I enjoyed her matching Froot headgear. 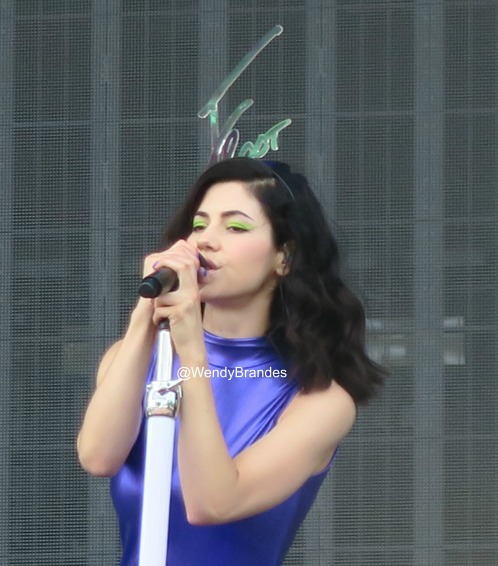 Check out the cool yellow eyeshadow.

It’s been a pretty cool summer in New York and it was quite pleasant on Randall’s Island that day, but it did get a little hot during Marina’s set and, as you can see, her backing musician was as amazed as I was that Marina didn’t sweat through her shiny, skintight catsuit. 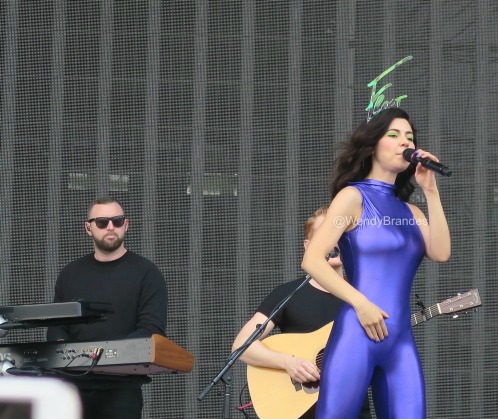 “How is she doing that? I’m totally shvitzing in this black outfit!” — keyboard man.

After Marina, we got Little Dragon, a Swedish electronic dance music group. I was hyp-mo-tized (as David Letterman might say) by singer Yukimi Nagano‘s origami-looking skirt, cropped jacket and cool hairdo. Those were much more appealing to me than the ear-destroying bass that brought me back to the trauma of being next to the speakers for a performance by DJ Tiësto last September. This time, at least we had earplugs. Thanks for providing those, Jessie! 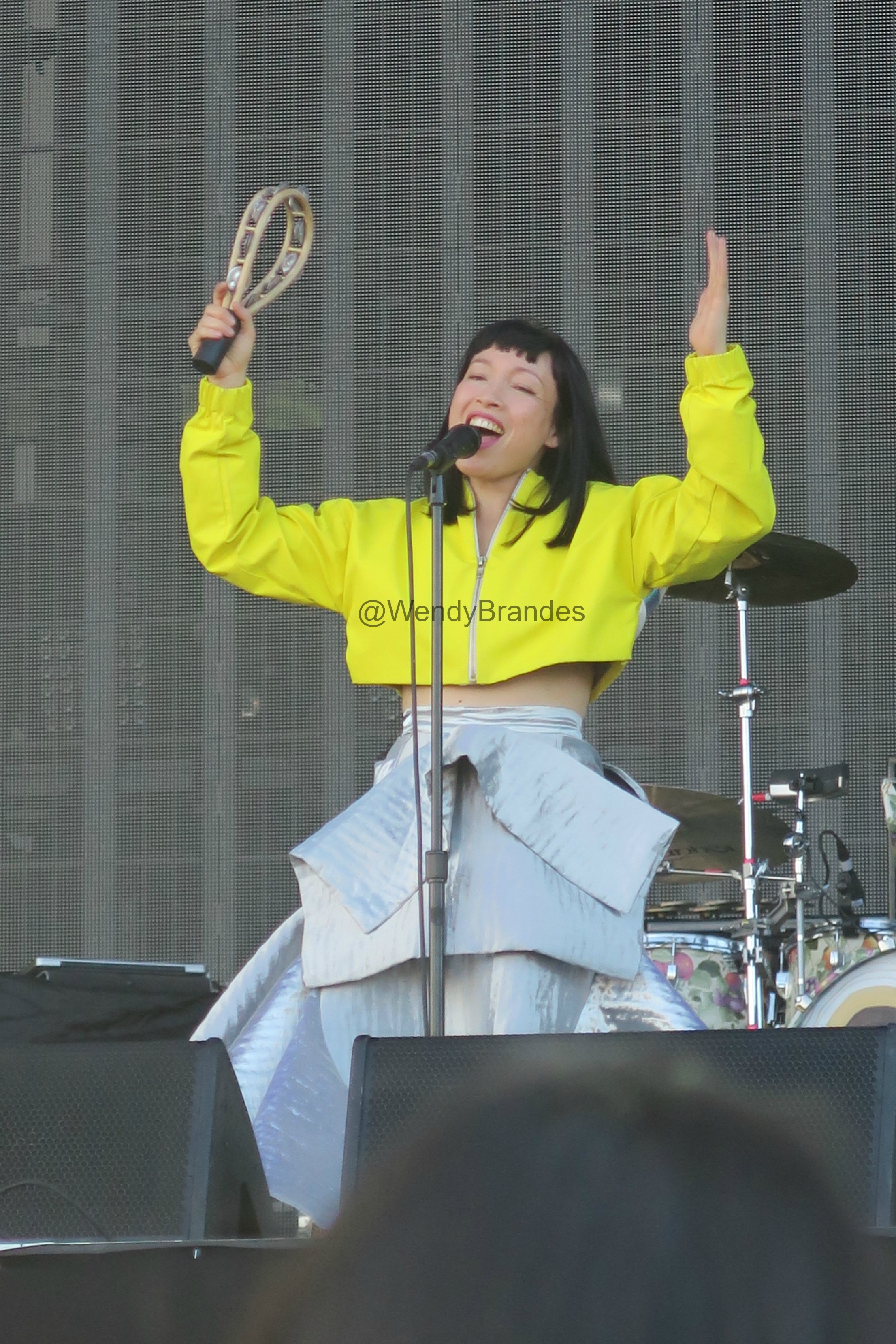 Bjork was up next. It was the third time I’d seen her this year, and the first time I was able to take photos of the performance. You know I love my concert photos! This time, Bjork was dressed as a fuzzy butterfly. I heart her! 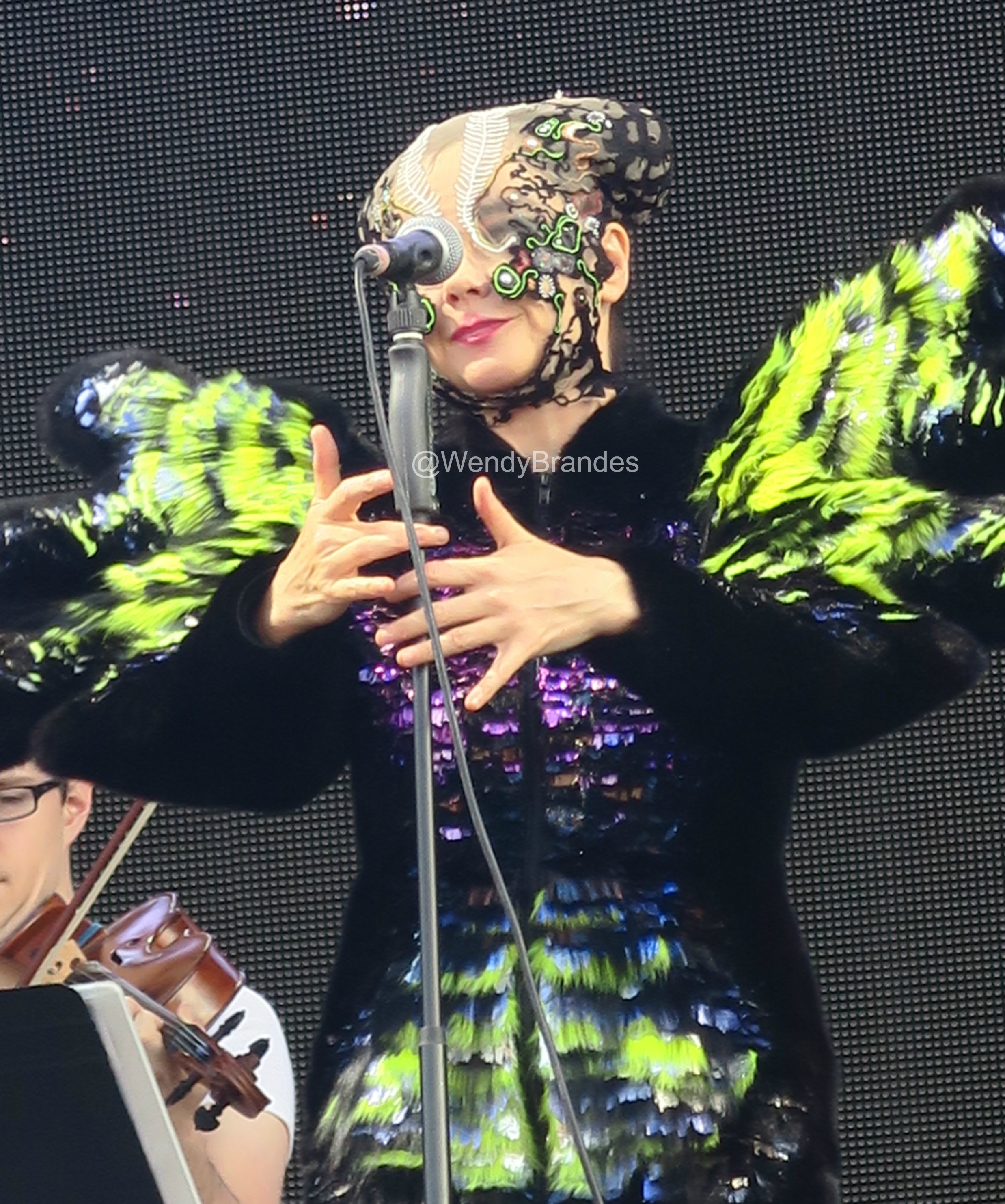 Jessie and I got to the stage around 2 p.m. and Bjork finished around 8:15 p.m. The headline performer of the evening at GovBallNYC stage was electronic music superstar Deadmau5, who was coming on at 9:30. After Bjork, I was a little like, “Nooooooo,” about staying longer because it was starting to dawn on me that I don’t like EDM all that much. Jessie was like ,”Yessssss,” and considering that Deadmau5 is THE famous EDM guy, I decided to give it a try. Besides, he has that cool dead-mouse helmet, which I figured was worth seeing in person. 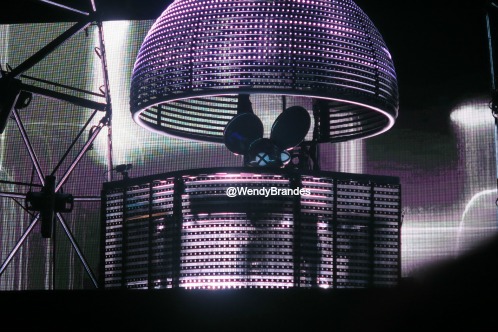 The Mau5 emerges from his pod.

The set was unexpectedly interesting because Deadmau5 kept losing power. At various points, he had words with his crew, walked to the front of the stage to do an ironic Ashlee Simpson style jig and killed time with a few pushups while girls around me yelled consolingly, “We love you, Joel!” (Superfans like to address artists by their birth names to show how intimate they are with their faves.) 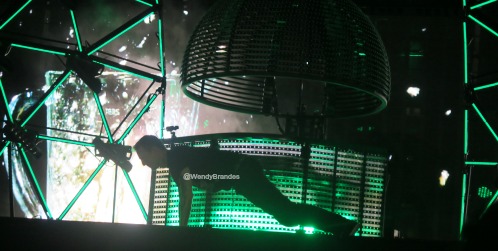 Jessie and I stayed till the bitter end and, as we walked back across the bridge connecting Randall’s Island to Manhattan, I thought, “Okay, I’ve seen the mouse king. That’s enough EDM for me.” My aversion to EDM started with that Tiësto set last year. I used to like this shit! Even in 2002, as Eminem rapped (incorrectly, as it turned out), “It’s over, nobody listens to techno,” in his song “Without Me,” I still liked Em’s target, Moby, a little, and English DJ Fatboy Slim a lot. I mean, how can you not love Fatboy Slim’s video for “Weapon of Choice,” which starred Christopher Walken and was a six-time winner at the MTV Video Music Awards in 2001.

Admittedly, I never saw Fatboy Slim live while standing right in front of his speakers, and I’ve recently seen a lot of EDM in that situation, so maybe that’s why I feel like the previous techno generation didn’t rely on stupid-loud bass that drowned out anything interesting about the music. Maybe the old-timers would suck as bad as the new ones under those concert conditions. All I know is that I once liked this type of music, and now I hate it, and that was before I was exposed to a lot more of it on the last day of Governors Ball.

On Sunday, Jessie and I were completely focused on seeing Lana del Rey (happy birthday, girl!) Jessie got there super-early — around 8:30 a.m. — to be one of the first 10 people on line for Lana’s 9:15 p.m. performance. I joined her at 11 a.m., to wait for the gates to be opened around 12:30 p.m. We were very concerned about getting a good spot because Lana was relegated to a smaller stage, with no center aisle, so the only clear view was going to be from the front row. And then … scandal! It turned out a bunch of fans sneaked in early and took up the whole front row. First, security said they’d be expelled from the festival. Then different security moved the sneaky peeps away from the stage, but kept them well ahead of the rest of us, meaning that as soon as doors were officially opened, the gatecrashers would be right back on the barricade. (Governors Ball security! You suck!) When the gates opened, Jessie ran like the wind, as she’s done before, and secured for us and our new friend Britt the last front-row spots on the far, far stage-right side, directly in front of the gigantic speakers. It wasn’t ideal but it was better than nothing … and we only had about 9 hours to go. 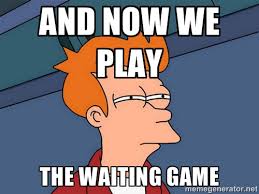 While we waited, I was privately cracking up that so many “experts” said Lana’s career was dead in the water after her much-criticized 2012 Saturday Night Live performance. At the time, pre-disgraced news anchor Brian Williams said it was “one of the worst outings in SNL’s history.” Just think! If we had known what a bullshitter Williams was, we would have known to expect that Lana would develop a gate-crashingly passionate fanbase and that her 2014 album Ultraviolence would debut in Billboard’s No. 1 position while, in 2015, Williams would be delivering a crap apology for making up stories.

While I’m expressing my irritation with the smug know-it-alls who know exactly how to predict a career trajectory, let me add that I’m also annoyed by people who say Lana is a studio creation, with an emphasis on the fact that she apparently got her lips done and that she started using a glamorous stage name instead of her more prosaic birth name of Elizabeth “Lizzy” Grant. Look at some of the dudes I’ve mentioned in this post: Deadmau5 (né Joel Thomas Zimmerman); Eminem (Marshall Mathers); Moby (Richard Melville Hall); Fatboy Slim (Norman Cook); and Christopher Walken (Ronald Walken). And does anyone actually think that the guys in the Ramones were all relatives? Not a single one of them was born with last name Ramone; it was inspired by “Paul Ramon,” a stage name Paul McCartney used in his very, very early days. Most of the Ramones changed their first names too. Stage names are really common in the music business, so folks can just fuck off with criticizing Lana for using one.

The only act I appreciated before Lana showed was the rapper Logic (government name Sir Robert Bryson Hall II, for real). 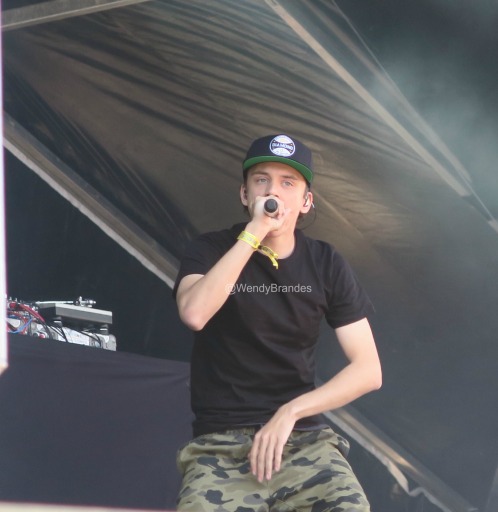 Logic has a good stage presence.

Other than Logic, there were two bass-heavy rock acts and the rest was … EDM. Of course. All of us in the front row who had earplugs still kept our hands clamped over our ears for most of the performances. The security stationed between the stage and the audience occasionally offered their spare earplugs to fans who looked like they were about to pass out from bass overload. I swear, you can feel that bass in your heart; it might be contraindicated for people with pacemakers. But it was all worth it for Lana! 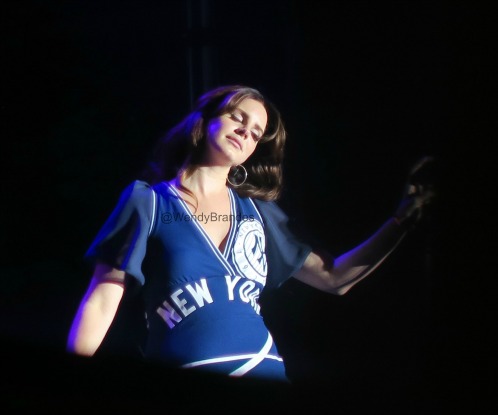 The beautiful Lizzy Grant. (Her fans hashtag her real name on Instagram to show how close they are to her. Mmm-hmm.)

Jessie had warned me that Lana’s fans are some of the most ferocious around, and she was right. All that emo, “Born to Die” energy! The crush put the 2011 Lollapalooza audience for Eminem to shame. The fans screamed like banshees when Lana touched her hair, when she gave a little moan, when she lit up a cigarette … 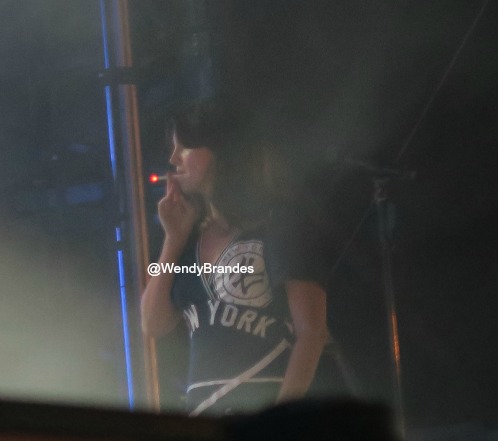 … so when Lana left the stage mid-performance to collect roses, notes and kisses from the other side of the front row, heads nearly exploded. I was hopeful she’d come to our side too, but I was a little relieved that she didn’t. I was already in a tight squeeze; I think if I’d gotten within touching distance, the fans behind me would have suppressed me like a guinea pig in Alice’s Adventures in Wonderland. 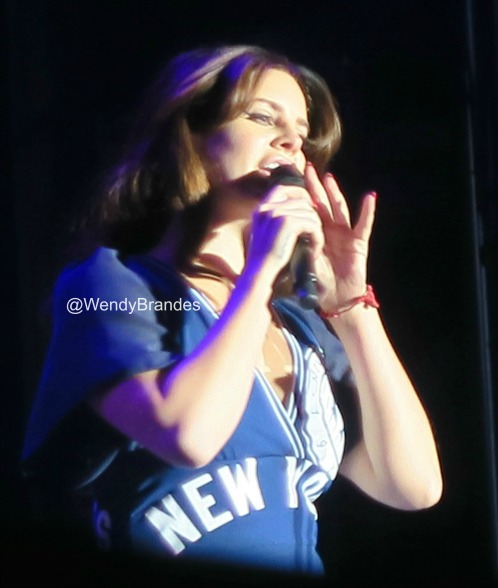 I definitely want to see Lana again … and I THINK I’d even suffer through another EDM act to do it. What am I saying? Hearing “Cola” live is worth death by bass.

You might also like
Going Back to Cali
Musical Interlude: Eminem at G-Shock 30th Anniversary Party
Musings on John Lennon's Birthday
Previous Post: « What Wendy Wore: That Zandra Rhodes Dress
Next Post: What Wendy Wore: Shorts by Zang Toi »