On Monday, I posted my outfit for Sunday’s Vanity Fair Oscar party. It was the same ensemble I wore to the Committee to Protect Journalists dinner in November. 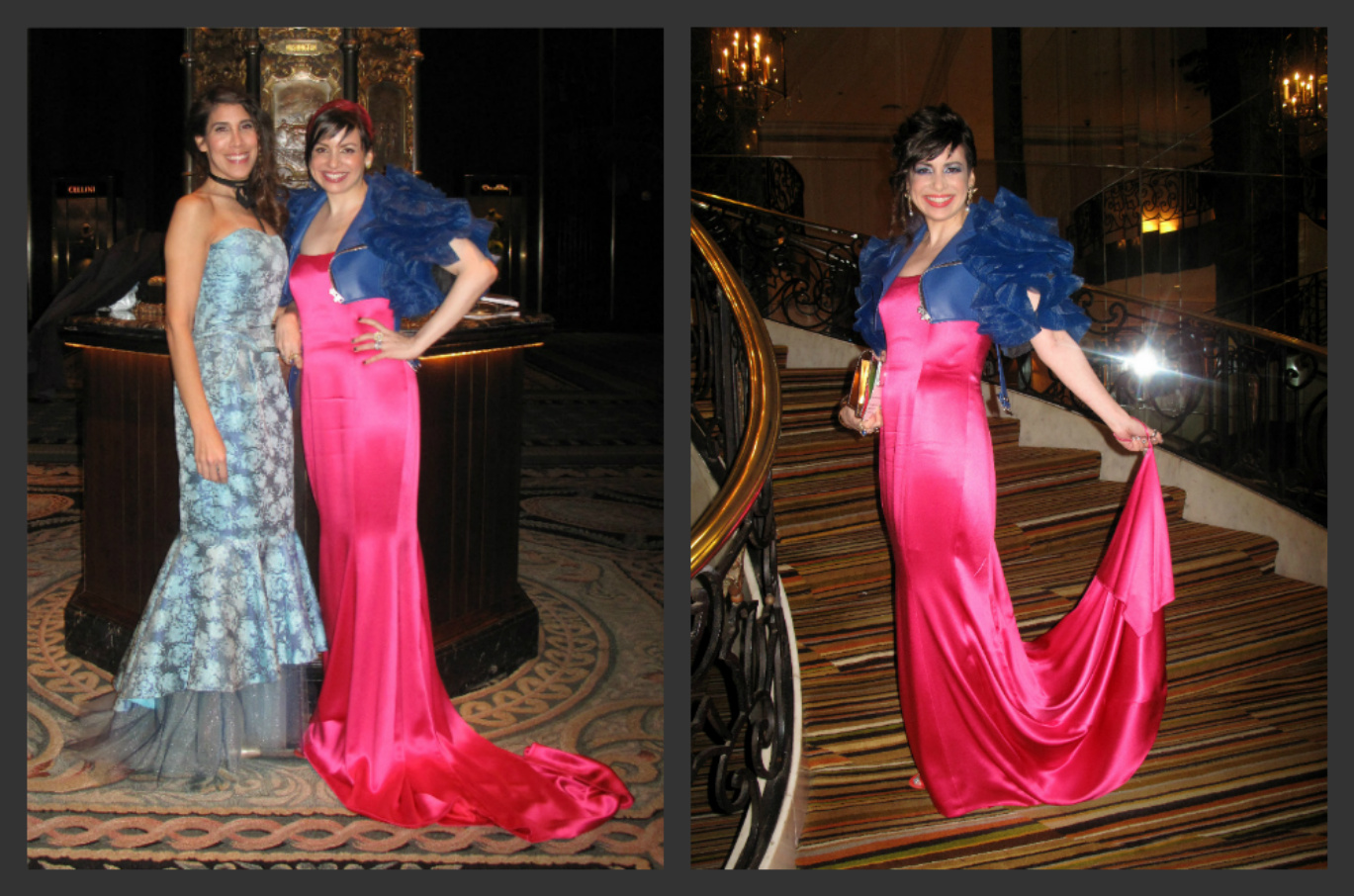 Left photo is from November. Right is from Sunday. Click to enlarge.

It turns out that I had a couple of higher-profile sisters in recycling on Oscar night. My very first Wear What You Want style icon, actress Helena Bonham Carter, wore a Vivienne Westwood dress that she’d worn to the London Film Festival last October. And publicist Hanna Bagshawe — who attended the Oscars with her boyfriend, Les Misérables actor Eddie Redmayne — wore a green gown that she’d been photographed wearing in December. I like it! Let me know in the comments if you find any more examples of what I’ll call “repeat defenders.”

One thing I did switch up for Sunday was my hair and makeup. In November, I wore my hair pulled back tightly and sprayed pink, but my makeup was sedate. This time, I told gorgeous hair/makeup expert Stephanie Daniel to get creative with the hair and the makeup, the way she did with the look she gave me for the Weinstein party on Saturday. Once again, there was no mirror in front of me as she worked, so I had no idea what she was doing, though MrB was watching and taking pictures. 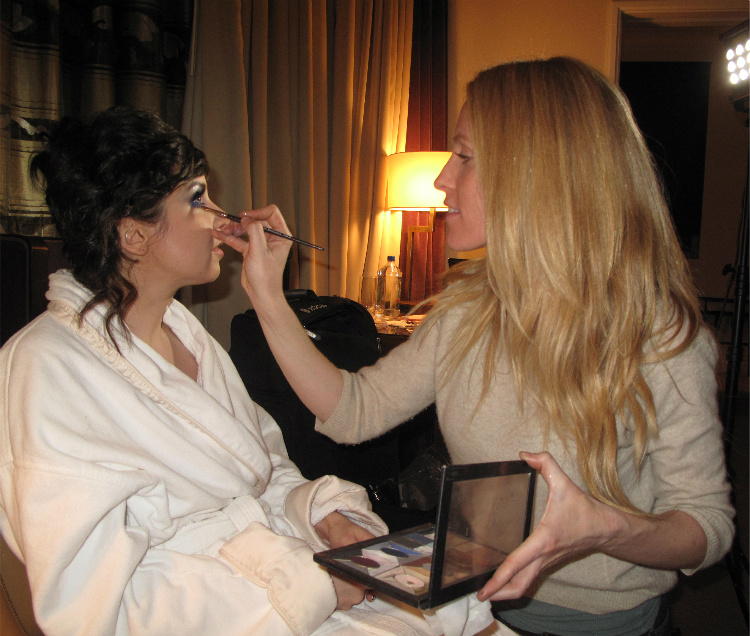 Once again, I loved the results … 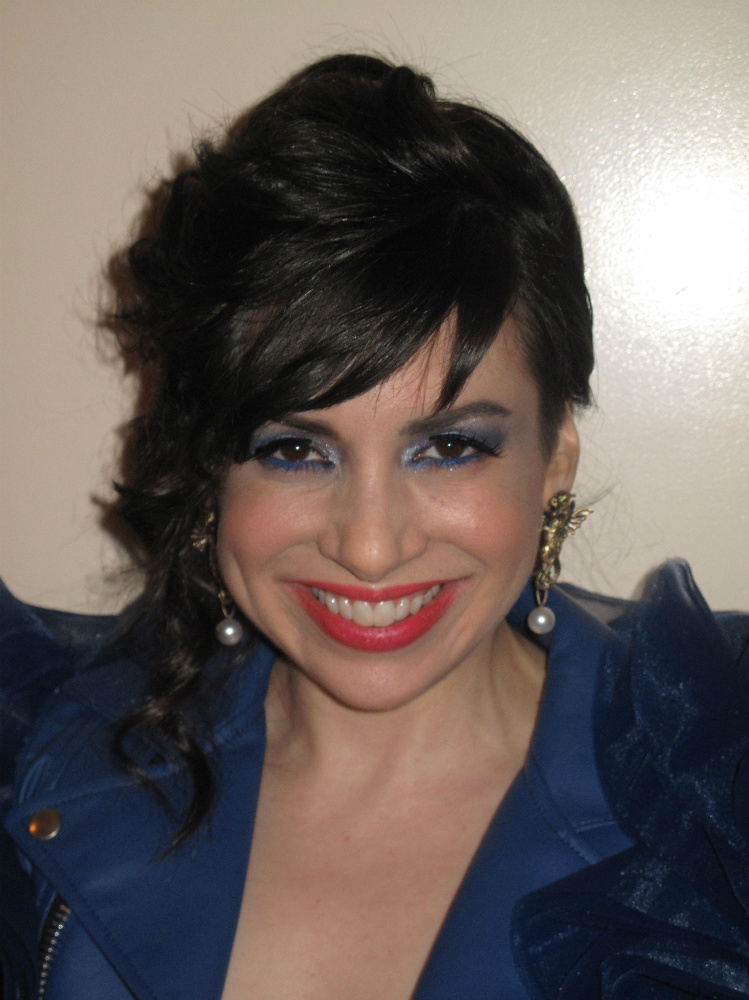 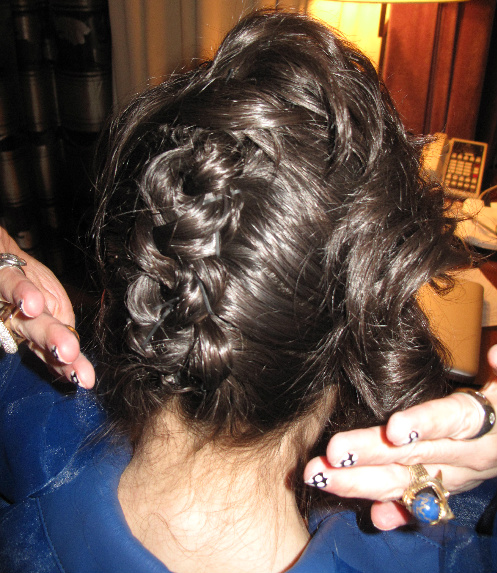 Also showing: my polka-dot nails by Tracylee Percival and my own Empress Wu dragon ring design.

As we approached the party in our rented Toyota Camry, I was amused by the crowds hoping to get a peep at the celebrities who were sitting behind tinted limo window. When I took a picture of them, MrB had an Inception-style dream-within-a-dream moment: “You’re taking photos of people taking photos?!” 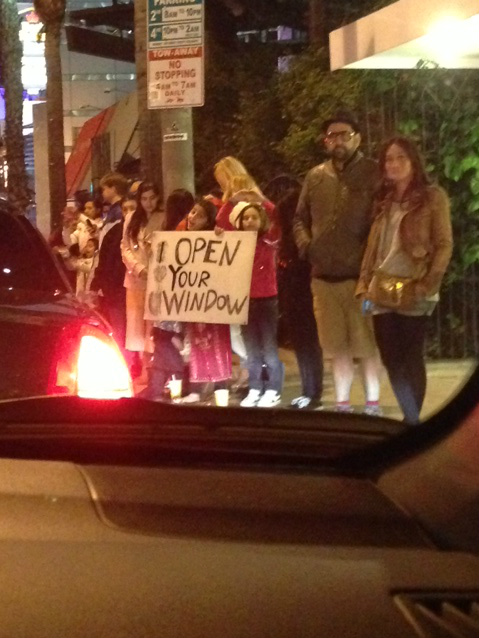 Once inside, we saw real-life True Blood couple Stephen Moyer (Vampire Bill on the show) and Anna Paquin (Sookie). She had her hair twisted up into two little knots in the back and was so cute I wanted to bite her. We walked by a tall girl who looked so young that I said to Paul, “Look, they’re letting in 12-year-olds!” Later I realized it was elderly 16-year-old Hailee Steinfeld. It also took me a long time to figure out that a very tall blonde model was actually tennis star Maria Sharapova. Comedian Russell Brand chatted to uber-comedian and Stacy Lomman’s crush, Steve Martin. I hope Steve gave him some tips. Solange Knowles (stunning in yellow Pucci) perched in the same spot that Miley Cyrus occupied last year. Sally Field seemed so much shorter than me that I wondered if she’d taken her shoes off. I was kind of right — she’d changed into sneakers. Daniel Radcliffe was also tiny. I wanted to slip him into my clutch and take him home as a souvenir but MrB said I already have enough pets. I didn’t notice Robert DeNiro brushing by, though MrB did. I was too busy staring at Elton John. I was SO close to Elton that if I were any closer, we would have been wearing the same wig. Also spotted: David Spade, Jamie Foxx, businessman Barry Diller, Steven Tyler, Adrien Brody, Dave Grohl, John Legend, Selena Gomez, Salma Hayek, Joan and Jackie Collins, Denzel Washington, a very tall Conan O’Brien, Melissa McCarthy, Ginnifer Goodwin, repeat defender Helena Bonham Carter and Tim Burton, Quentin Tarantino, Fan Bingbing, Diane Kruger and Kate Beckinsale.  Anne Hathaway came in with her Oscar, looking like she was still in a dream. While mega-producer Harvey Weinstein chatted to someone else, a foreign-born actress stared at him desperately, hoping to get his attention. She didn’t succeed. It was impossible to miss model Irina Shayk in her low-cut gown.

We wandered out on a terrace to get some air and actress Paula Patton told us that if we stayed in that spot, a guy would be coming back in a moment with some In-N-Out Burgers. “We’re already in the dress, so now we can eat!” she said. We took her advice. 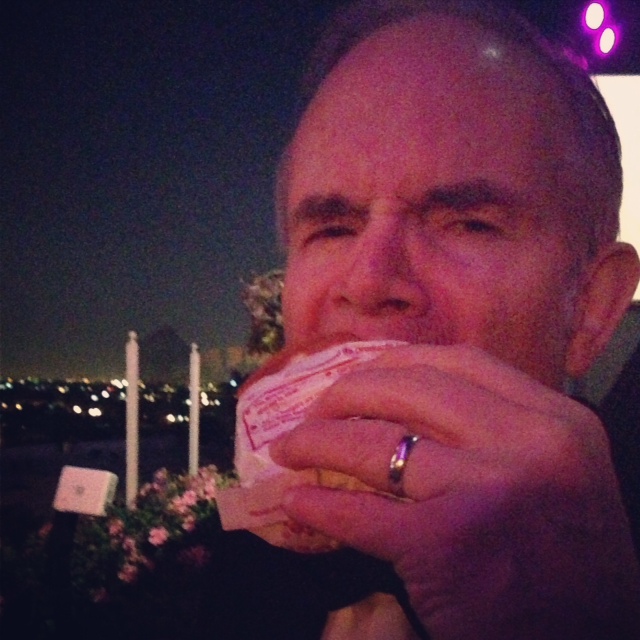 MrB and I are now obsessed with In-N-Out.

In the wee hours, we saw an Oscar sitting on a ottoman while its owner ate his In-N-Out burger. 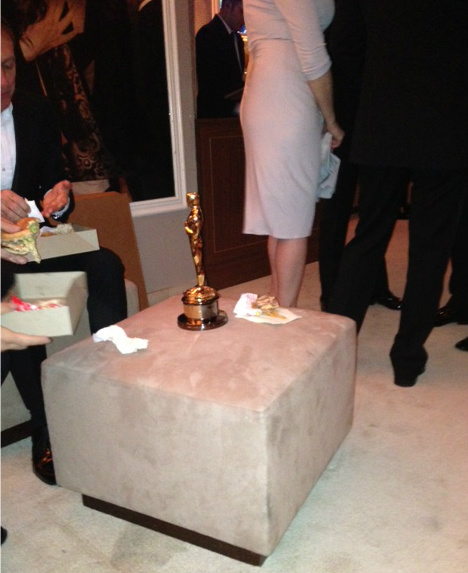 One of my followers saw this photo when I shared it on one of my zillions of social-media outlets and suggested In-N-Out should do an ad campaign: “I’d put my Oscar down for an In-N-Out burger.” If that was you, take credit in the comments!

MrB fangirled over comedian Sarah Silverman and sidled up to chat with her. She was so cute and funny and polite. I appreciated that when MrB gushed, “I loved you in School of Rock,” she refrained from saying anything like, “What, you don’t like my vagina comedy routines?” (Nearly all the actresses MrB and I have spoken to briefly at parties have been completely charming. The actors are sometimes surly. The only exception to the nice-lady rule in a decade: Christine Baranski, who was dismissive of MrB at a party in New York last year. Totally ruined The Good Wife for me.) Another highlight was being by the door just as Jennifer Lawrence, wearing a shimmering Calvin Klein dress, walked in with her Oscar. I heard her saying repeatedly to her entourage, “I have to change! I have to get out of this dress! I can’t walk!” I guess one clothing-related fall on Oscar night was enough for her. I don’t know if she ever got to change. If you haven’t seen her 2010 movie, Winter’s Bone, you must. Very intense film and she’s wonderful in it. I just adore her, and now even more so thanks to her down-to-earth manner at her post-Oscars press conference.

We left at 2:45 a.m. or so. The photographers had abandoned their posts by then … 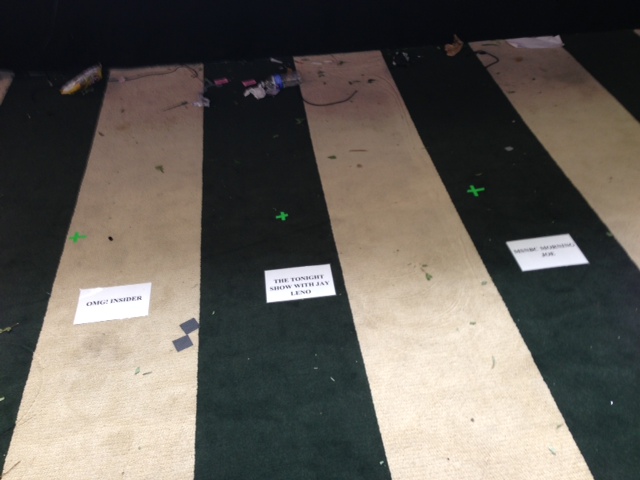 Everyone had his or her designated spot.

… so I stopped and played paparazzi for MrB. 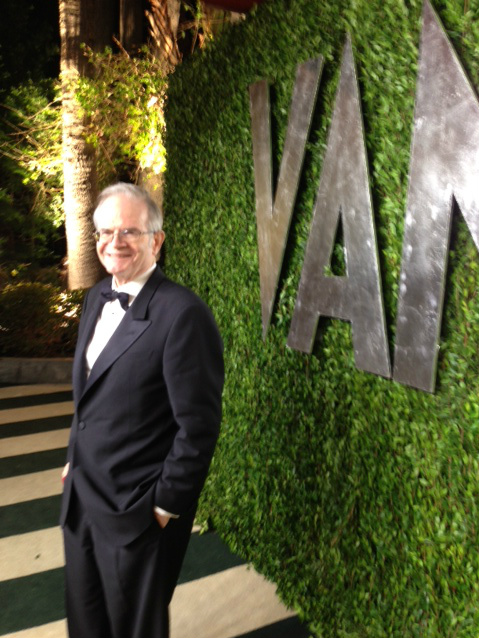 Helena Bonham Carter and Tim Burton were leaving at the same time we were. Steven Tyler was chatting with peeps near the In-N-Out stand in front of the party. 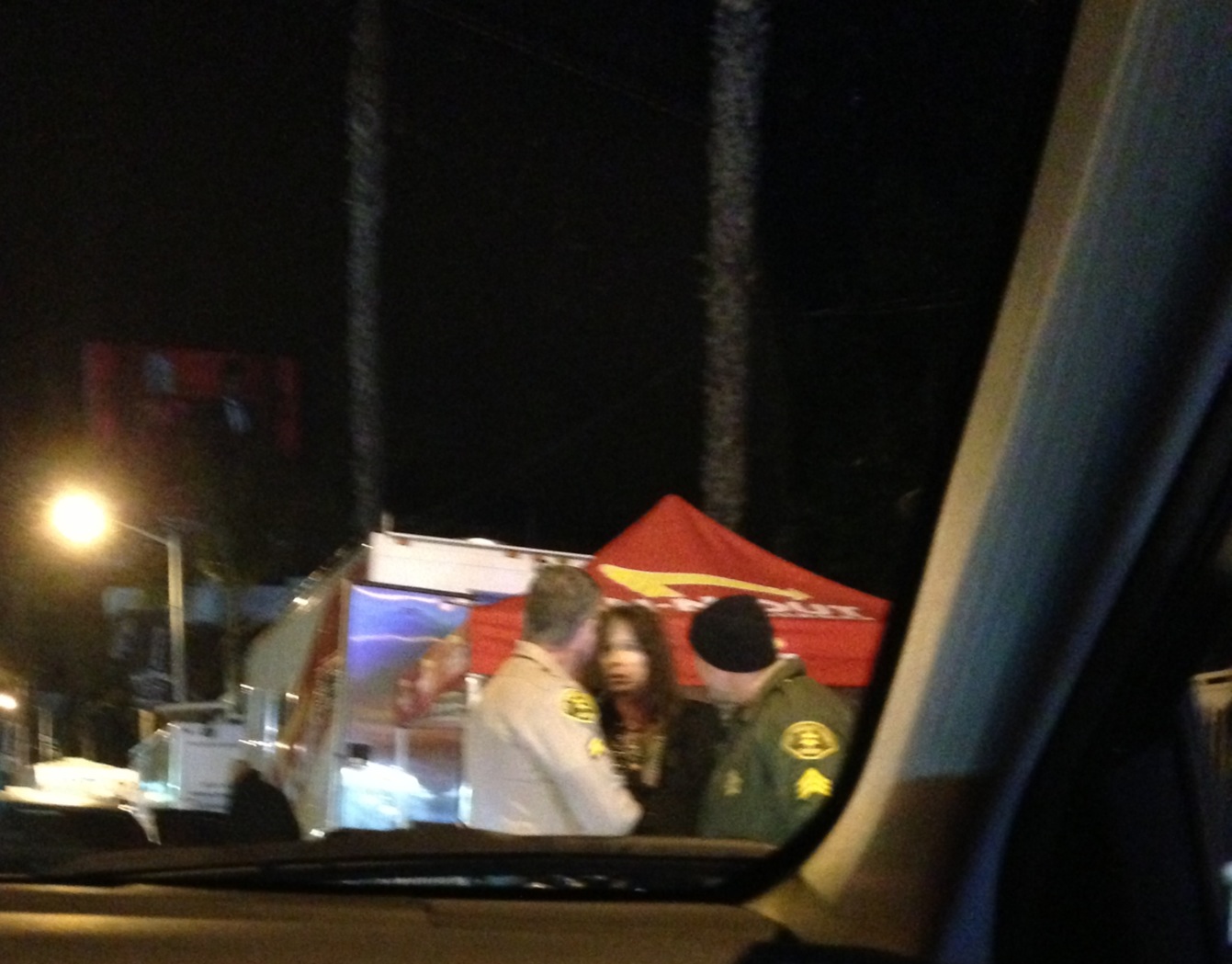 You’ll have to take my word for it: Steven Tyler is the middle guy in this photo.

I had been curious by the two seats in the elevator in our hotel since we checked in. They’re placed a little too low to be comfortable. I had been wondering when one might be tempted to sit on them. After a big party seems like the right time for a little elevator relaxation, right? 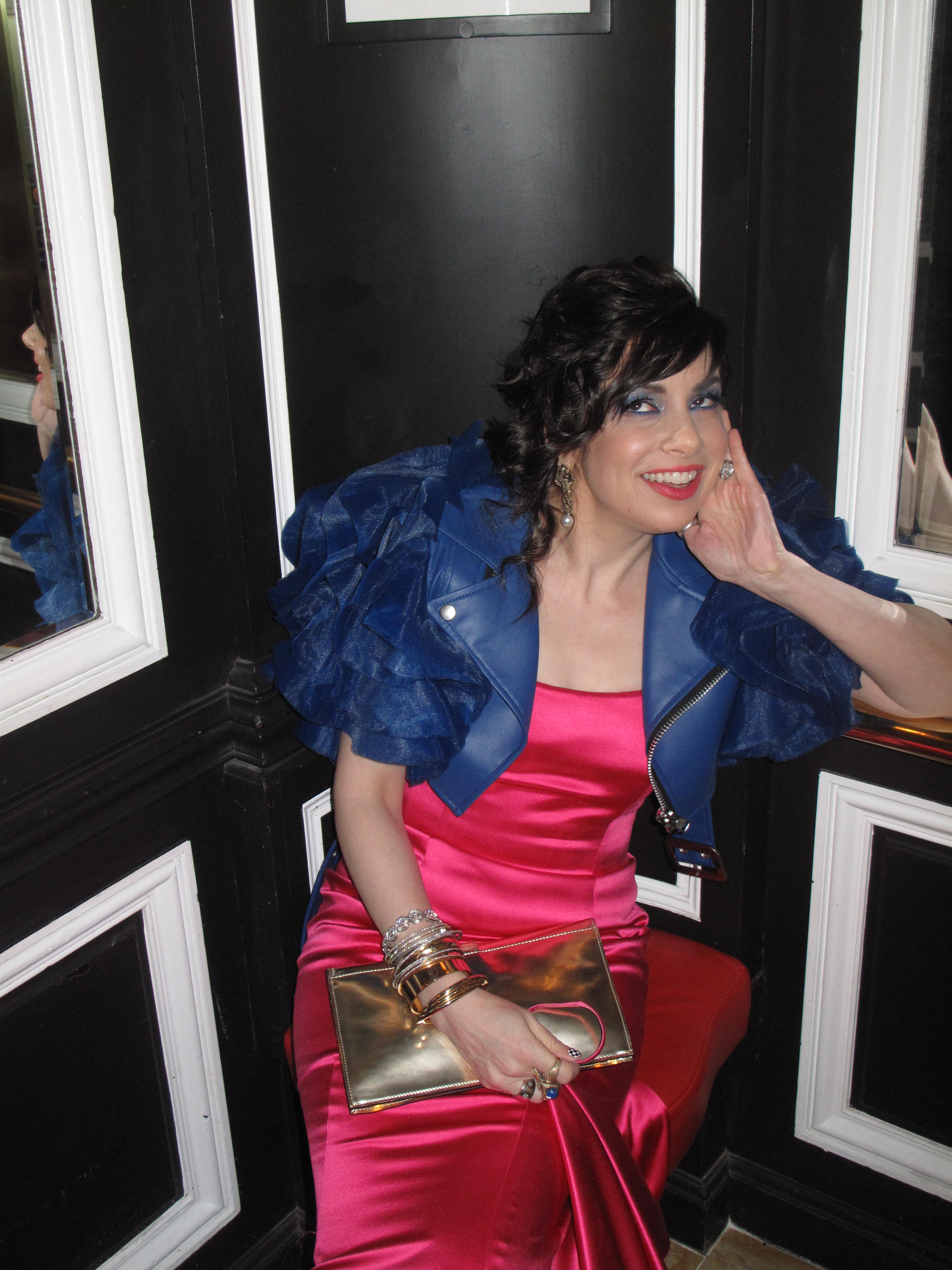 Whew! My dogs are barkin’!

While I wasn’t able to walk off with Daniel Radcliffe, I did get a nice keepsake from the Vanity Fair photobooth. If you haven’t seen that, check out my first post on the party. Look at MrB getting all saucy with me in one of those pictures! Sarah Silverman would be proud.

UPDATED MARCH 5 TO ADD: I linked this to Not Dead Yet Style’s Visible Monday post. Check out that blog to see other wimmins doing their style thang.

You might also like
What Wendy Wore: Golden Girls Gang Does Vegas
Fashion Repeats Itself: Trompe L'oeil Zippers
The Matrix Is Everywhere
Previous Post: « WWD Likes Social-Media Jewelry; Buy Yours From Me!
Next Post: Reporting From Cloud Nine »