I’m starting to think I might be some kind of rap goddess … or maybe just a prophet, leading nonbelievers to the promised land of hip-hop. Last year, I got my non-rap-fan sister to stand 9 1/2 hours with me to see Eminem at Lollapalooza. This summer, I took MrB to his first rap concert when Jay-Z and Kanye West performed in Paris. And this Wednesday, I convinced designer Stacy Lomman — who hates all rap except for the Beastie Boys — to travel to Brooklyn during a nor’easter, on a subway system that hadn’t fully recovered from Hurricane Sandy, to see Alabama-born rapper Yelawolf.

The show was originally scheduled for March, but it was postponed when Yela ruptured his spleen while stage-diving. (This has been my year for getting tickets to concerts that are canceled due to a performer’s health.) Even when I first got the tickets, I was thinking, “Am I really going to go to this show?” I’m usually too lazy to haul my ass to Brooklyn for any reason whatsoever. It’s not like I can’t find shit to do in Manhattan, where I have the advantage of knowing my way around all the neighborhoods. But I met my gorgeous rapper friend Gangsta Boo because of her collaboration with Yela on the song “Throw It Up,” so I feel sentimental about the guy.

As the rescheduled show drew nigh, Sandy took out mass transit for days and I thought again, “Really?” Finally, a nor’easter was predicted for the day of the concert. At that point, some people might have thought, “This is a sign it’s not meant to be.” Instead, I decided, “This is so ridiculous that I have to go.” I emailed Stacy, telling her, “It will be an adventure!” (I used similar reasoning on my sister.) Stacy asked, “Yela who?” but said yes. So, we put on our boots, puffa jackets, Stacy Lomman-designed arm warmers, scarves and berets and took an hour-and-a-half trip to Brooklyn Bowl on a night when all reasonable people were staying in. Stacy wrote about our journey and the show on her blog.

Because of the weather, the venue wasn’t as crowded as it would have been normally. All the people were diehard fans who were nice and friendly. We got there a few minutes before Yela came on and breezed up to the front of the stage, which made me happy. I find that, at my advanced age, I can’t get excited about a concert (or fashion show) unless I have a great view. No need for me to stand in anyone’s back row anymore, thank you very much. Been there, done that, get me up front or get me a chair. 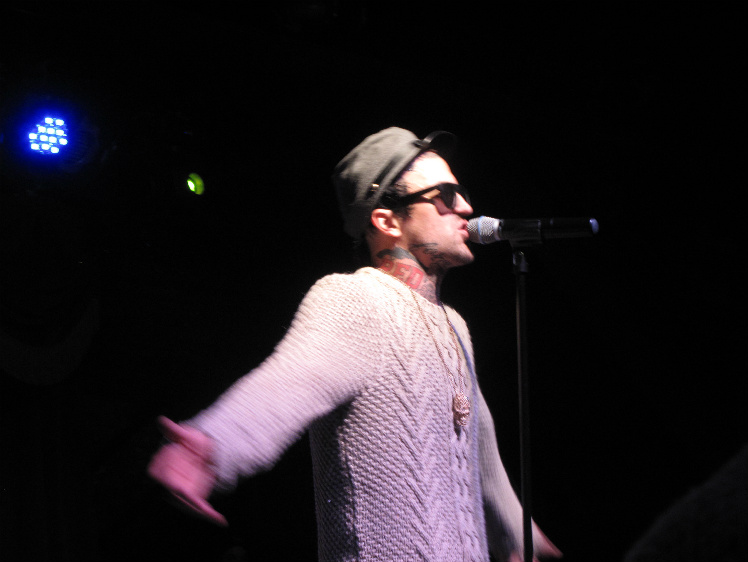 My best photo of Yelawolf at Brooklyn Bowl.

If you’re into Yelawolf at all — or into rap in general — and have a chance to go see him, I recommend it, because he’s a dynamic performer. Even Stacy was impressed. 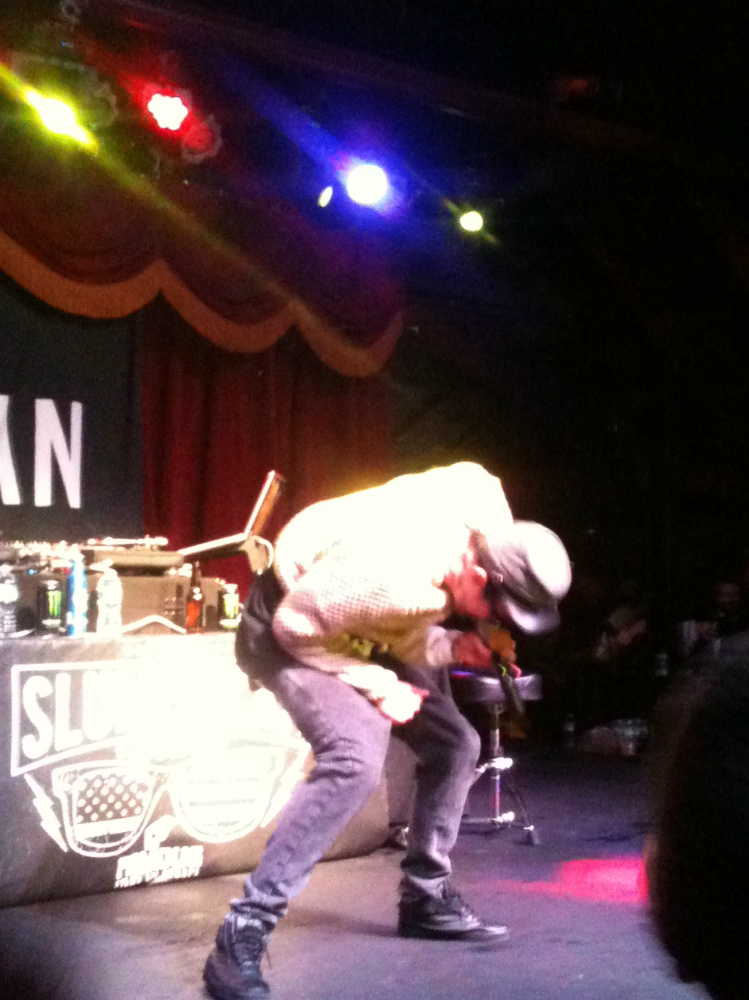 The only disappointment was that Boo wasn’t there to do her part of “Throw It Up.” She should’ve been! The audience was totally into the song when he did it; they would have gone crazy for Boo. (Boo, I sang all your lyrics!) Singer Fefe Dobson, Yela’s girlfriend, didn’t get on stage to perform their collaboration song, “Animal,” either, but he proudly pointed her out in the balcony twice and spoke very lovingly about her. He kept his hat on, however, so I didn’t get to admire his Fefe head tattoo in person.

Yela, when you’re ready to pop the question to Fefe, holla at me at wbjewelry at hotmail dot com because I’ll design you rings that will complement your romantic head tat. Actually, I’d like to do some non-wedding jewelry for Yelawolf too. I couldn’t take my eyes off his chain during the show. It was a skull, and I love skulls (see the header of this blog). It looked like it was yellow gold — my fave — instead of the white-metal “bling” that has been the standard look for male entertainers for over a decade. Also it appeared that the skull’s jaw was hinged, and jewelry with moving parts is one of my specialties. I generally don’t spend so much time thinking about jewelry during a concert (unless I’m in the process of losing a treasured earring) but the subject was on my mind because I almost had the perfect ring set to wear that night. Unfortunately, I recently sold my last “E” ring and the replacement hasn’t come in yet. I couldn’t go to the show wearing this:

So close but yet so far! All sterling-silver letter rings available at wendybrandes.com

Wouldn’t those look good — with the “E,” that is — in yellow gold with diamonds on Yelawolf’s digits? I want to do that.  I wound up wearing my swear rings instead. Can’t go wrong with those.  I never got around to taking an outfit picture, but, because I was wearing a black turtleneck and black jeggings, you can just look at a picture of Mike Myers from Saturday Night Live’s Sprockets skit and get the idea.

Nothing I could have worn would have compared to the audience member who was dressed in a black-and-white cow outfit, complete with a hood with ears. He definitely won that night’s fashion stakes (steaks?). Stacy danced with the cow boy into the wee hours at a bar we all went to after the show. See? I told her we would have an adventure and I delivered. I’m a woman of my word.

UPDATED TO ADD: Stacy got one phone picture of me wearing the swear rings that night. 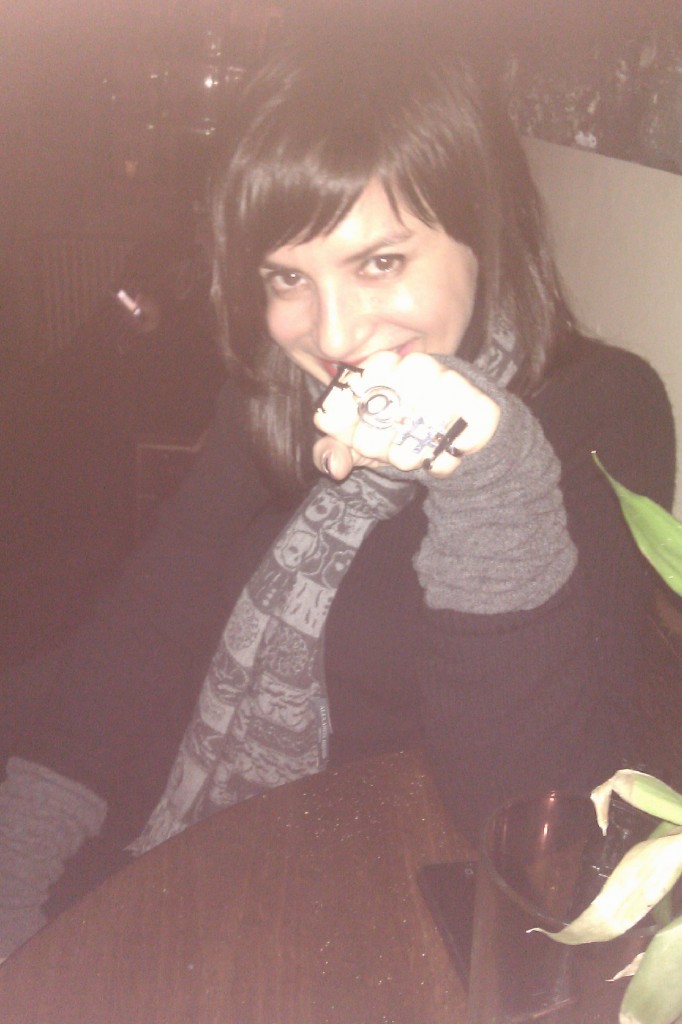