I was headed out the door when the BET Awards came on last night, but I noticed my Twitter timeline blowing up with derogatory references to singer Usher and his “pink boots.”  During dinner, I kept wondering what he was wearing to cause such shock and dismay. For some reason, I kept envisioning baby-pink cowboy boots.  No such luck. The footwear that was causing people to clutch their pearls in horror was this:

I have no idea how this color or shoe style read in person, but in the pictures, at least, it looks like he’s wearing neon-pink sneakers, making him right on trend. If the sneakers aren’t neon, he’s still gone for the “pop of color” so adored by fashionistas everywhere

Seriously? This is the scandal? I can’t even get excited enough to give Usher one of my Best Dressed/Wear What You Want awards. If I bumped into him, I’d probably say, “Cool shoes, man. I like that color.” I definitely wouldn’t scream, “Damn, Usher, you went for it!” After all, I grew up crushing on guys like Mick Jagger …

… and all of Duran Duran, but especially John Taylor (second from left) and Nick Rhodes (far right).

Y’all are going crazy because Usher is wearing pink shoes?  GTFOH.  I swear, if Ziggy Stardust-era David Bowie needed to pop over to the supermarket to buy kitty litter, he might throw on Usher’s outfit so as not to draw attention to himself. That’s how radical Usher’s look is. It’s David Bowie’s fucking kitty litter ensemble. Young people, today! I’m very disappointed in you. You’re uptight in weird ways. You’re okay with using your phones to tape yourselves having terrible sex but you’re scared of pink sneakers?  SMH.

On a happier fashion note, the photo of Duran Duran above reminds me that one of the newspaper clippings that’s been floating around my apartment is an interview the Wall Street Journal did with Duran Duran’s keyboardist, Nick Rhodes, last December.  Describing Rhodes as having a “… decades-long love affair with steroidal-shouldered jackets, tie-dye headdresses and black eyeliner …”, the Journal asked him about style. I tingled all over when Nick, who turned 50 last month, said, “I find that the older you get, the more helpful eyeliner is. I like [MAC’s] Fluidline in Blacktrack.” He also said his ultimate style icon is Grace Jones; that he has a “penchant for goth elegance”; and owns a pair of sunglasses that make him look like a bug. As for musicians today, Rhodes said:

For his personal appearance, fashion philosophy and feather love, Nick Rhodes is officially one of my Wear What You Want icons, joining previous awardees Grace Jones, Iggy Pop, Cate Blanchett, Helena Bonham Carter, and Angry Bird lady Teija Vesterbacka. I hope he enjoys his eyeliner for many years to come. I also hope that, someday soon, he enjoys one of my goth-elegant cufflink designs. 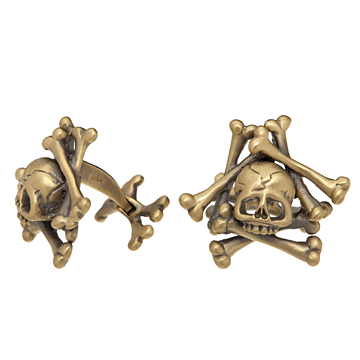 How about my 18K gold Memento Mori cufflinks?

In the Journal interview, he mentioned he has gargoyle cufflinks with moving parts. Who loves mechanical jewelry more than I do?  My whole line is his style. Nick, call me!

You might also like
Fashion Repeats Itself: Side-Ass Style
This Week's Sale Item: 18K Gold, Diamond and Ametrine Earrings
It's a Beatles-ful Day in the Neighborhood
Previous Post: « You’re as Young as the Music You Feel
Next Post: London Bloggers, the Queen and the Rock ‘n’ Roll Cobbler »