I’ve written before about how — even though I’m online nearly all day — I like to read newspapers (and magazines) printed on actual paper.  I also like to tear things out of newspapers and magazines: titles of books I need to read or movies I need to see, any news stories that inspire or annoy me.  Various scraps of paper and occasional whole newspaper sections then hang around the apartment for a long time. Sometimes I don’t recall exactly why I saved them. Today I came across an item I tore out of the New York Times’s Metropolitan Diary column at the beginning of last December. Metropolitan Diary often features overheard conversations. I’m going to guess this one cheered me up a bit as I braced for a birthday later that month. 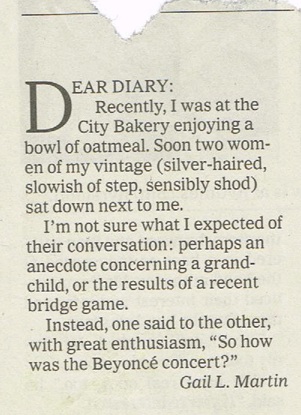 And, while I have no idea why I saved a photo of Joan Rivers to my computer desktop in June, it seems to go well with the newspaper clipping, so here it is.

CLICK TO SEE THE PHOTO I SAVED.
You might also like
My Best Dressed at the 2018 Met Gala Is ...
The Truth About Success
Requiescat in Pace, Andy Whitfield
Previous Post: « ObamaCare Is Bad News … for Canada
Next Post: Usher Was at the BET Awards; Nick Rhodes Is an Icon »