Aretha Franklin — the Queen of Soul — always knew how to create a Moment.

She was the diva of divas, as she proved 20 years ago this October, during the debut “VH1 Divas Live” special, at the end of which which she famously dominated Mariah Carey, Gloria Estefan, Celine Dion, Shania Twain, and Carole King throughout a group performance of “(You Make Me Feel Like) A Natural Woman.”

She sang right over Celine! I love her duet with Mariah Carey on “Chain of Fools” from that night even more. Mariah had a great set of pipes then, and she sang her heart out, but you could tell from her hesitant body language that she knew who the star was. Check out Mariah’s uncertain facial expression here … 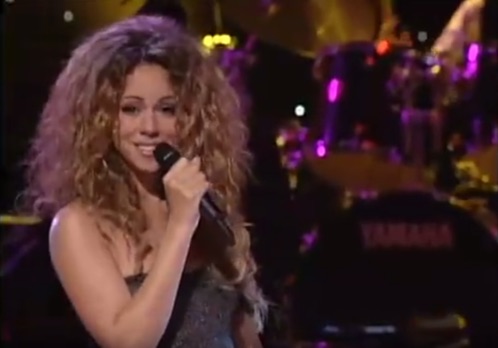 … right before Aretha grandly said, “Go ‘head,” and permitted Mariah to take her solo turn. I feel like Mariah wasn’t confident that was going to happen.

Then there was 2015’s performance of “(You Make Me Feel Like) A Natural Woman” at the Kennedy Center Honors, during which President Obama was moved to tears; songwriter and honoree Carole King pretty much lost her mind; and the audience surged to its feet for a mid-song standing ovation at the drop of a fur coat.

Considering the above examples, which don’t even scratch the surface of the number of times that Aretha snatched wigs …

… the timing of Aretha’s death today at age 76 from pancreatic cancer couldn’t be more in keeping with how she lived her life. While reading reports about Franklin’s declining health over the past several days, I had a premonition about this, because why shouldn’t the Queen of Soul steal the show one more time? Sure enough, Franklin took her last bow on this earthly plane on the same day the Queen of Pop — Madonna — celebrated her 60th birthday. It doesn’t often happen that a female star is publicly feted for turning the big 6-0 — an age when she’s “too old” to be sexy but not old enough to be recognized as a national treasure. Yet Madonna managed it, with ample pre-planned coverage this morning celebrating her influence on popular culture. Then Aretha figuratively dropped her fur coat one final time; I hope Madonna enjoyed the headlines while they lasted! Right now, tribute must be paid to Aretha and I’m collecting some of my favorite Franklin-related links for you below.

Actually, I will be back with my pre-planned Madonna post later tonight. Stay tuned. I’ll also update the links here with as many great Aretha tributes as I can find.

You might also like
Yay for Korean Girls!
I Get Around and Say Happy Birthday to BarbaraB
Random Nostalgia for Fake Lesbian Teens From Russia
Previous Post: « Wednesday’s Video: A Big Birthday Week
Next Post: Happy 60th Birthday, Madonna! »