Tomorrow is the 4th of July. Normally, I’d be packing to go to London to visit my peeps there. Then I’d go on to Paris for Bastille Day. But my summer travel got pushed up to June this year. I didn’t have time to blog about the trip as it was happening because I spent so much time online dealing with my Topshop issues. I wrote about the Paris leg last week. Now I’m finally going to give a shout-out to the gorgeous London bloggers who fought torrential rains, the Queen’s Diamond Jubilee crowds, and Jubilee-party hangovers to meet me at an obscure East London location for our annual Pimm’s fest on June 5.

That was the last day of the Jubilee-related bank holiday marking Queen Elizabeth II’s 60 years on the throne. In the morning, the queen and her family attended a special service at St. Paul’s Cathedral. When MrB and I left our hotel after lunch, the crowds had thinned out, but there were still some folks hoping to catch a glimpse of Liz. I stopped to take a picture of two ladies dolled up in Union Jacks. 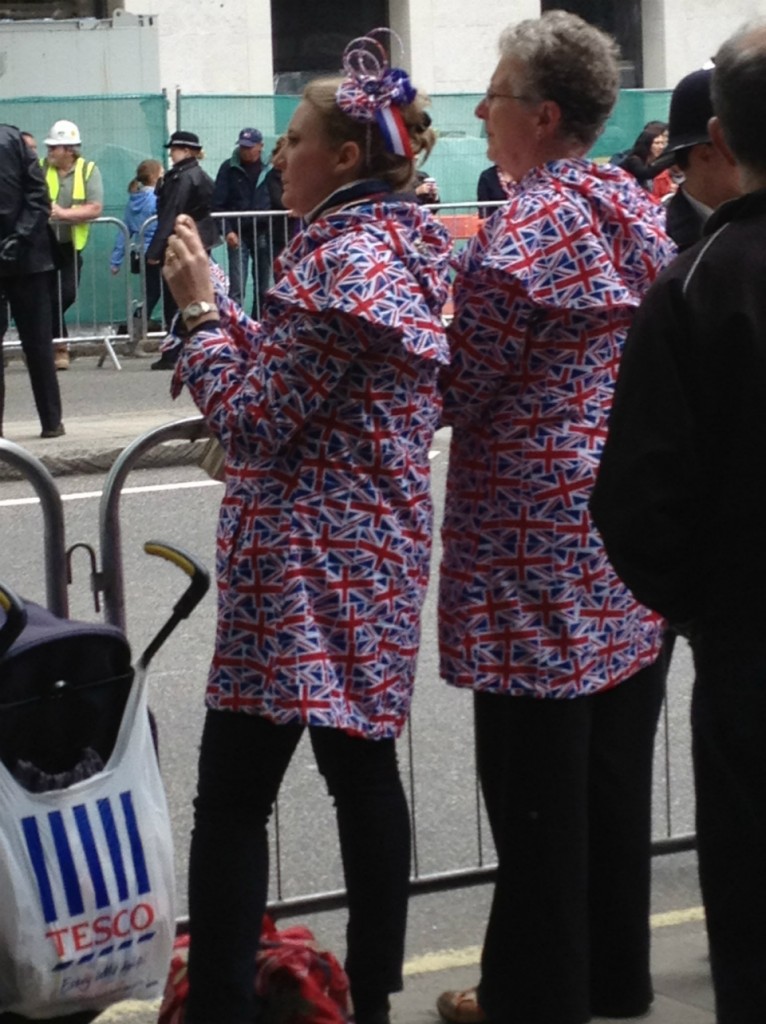 We walked on slowly because I wanted to keep my eye out for other patriotic fashion statements. That’s the only reason we were in the right place when a car with a fancy emblem approached. Everyone around us said, “It’s her!” And, sure enough, Her Majesty herself drove by, close enough for us to see her smiling and waving. I got so excited I wasn’t sure I could manage to get my phone out of my pocket. For a split second I thought, “I could fumble around and take a crappy picture and miss the moment or I could feast my eyes upon Liz.” I decided to feast my eyes. No regrets! I got a really good look at her. It was my second good look at her, actually. I’d seen her up close and personal in 2007.  I was equally thrilled this time, especially because she looked so happy and the sighting was serendipitous.

Thanks to the queen, I was in a great mood even before I hit the Pimm’s with the blogging crowd. 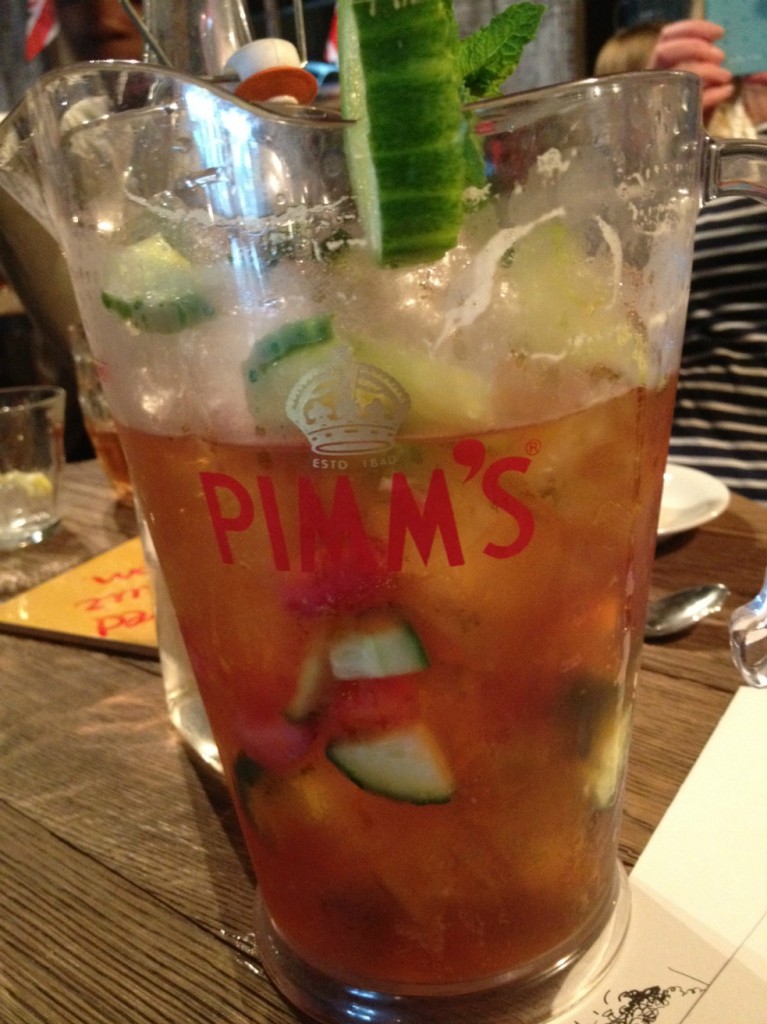 I love this stuff.

Per tradition, Sharon of My Style – Fashion, Vintage and Me ... tried on my jewelry. 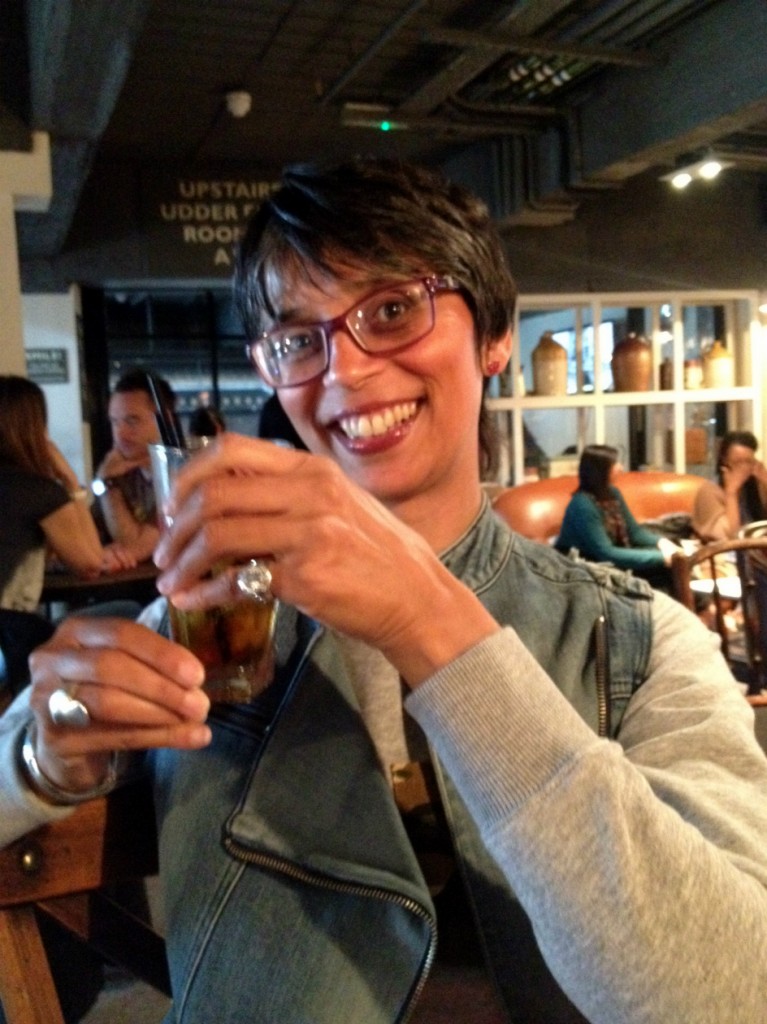 I wasn’t sure she was going to give that ring back!

Some people draw the short straw, but Sharon drew the big chip. 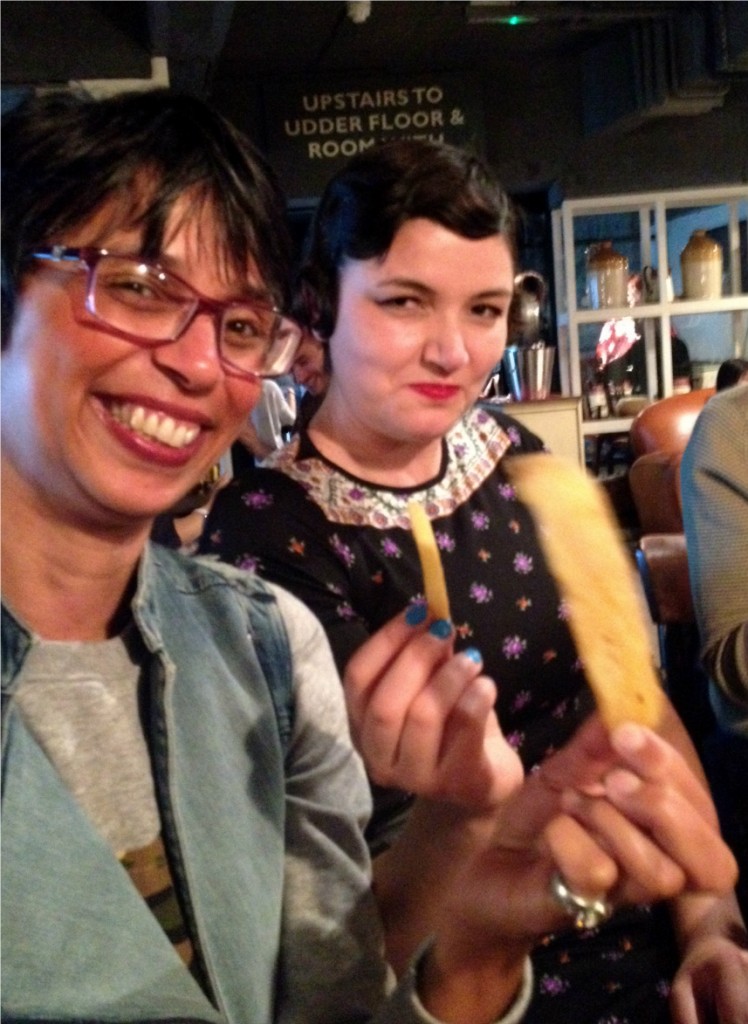 It’s not just a matter of foreground perspective. Sharon’s chip WAS gigantic. That’s Margaret of Penny Dreadful Vintage in the background with a regular chip.

Here’s the whole crowd. As you can see, only a few of us remembered to do the special blogger face-touching pose. I blame drunkenness for my failure to perform. (I swear, this has never happened to me before!) 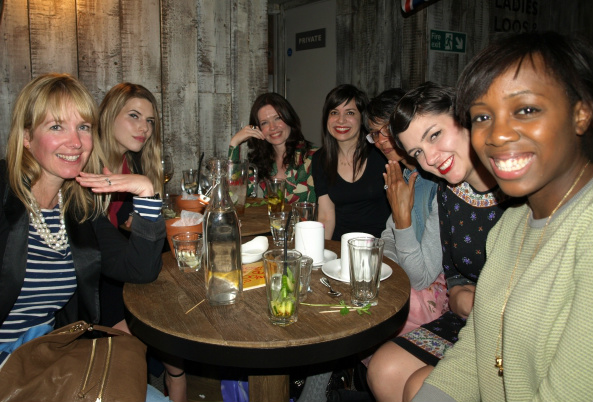 From left to right: Kate of Make Do Style, Laura of Sighs and Whispers, Liz of Vintage-a-Peel, me, Sharon, Margaret of Penny Dreadful Vintage and Kristabel of I Want You to Know. (Thom Wong of Sunday Best stopped by to say hi, but missed the photo op.)

A trip to London wouldn’t be complete without seeing these ladies — those I’ve known for years and the newcomers. I’m glad everyone managed to come out on such a nasty day. You can read more about our gathering at:

And if you’re a London fashion blogger, I hope to see you next summer! 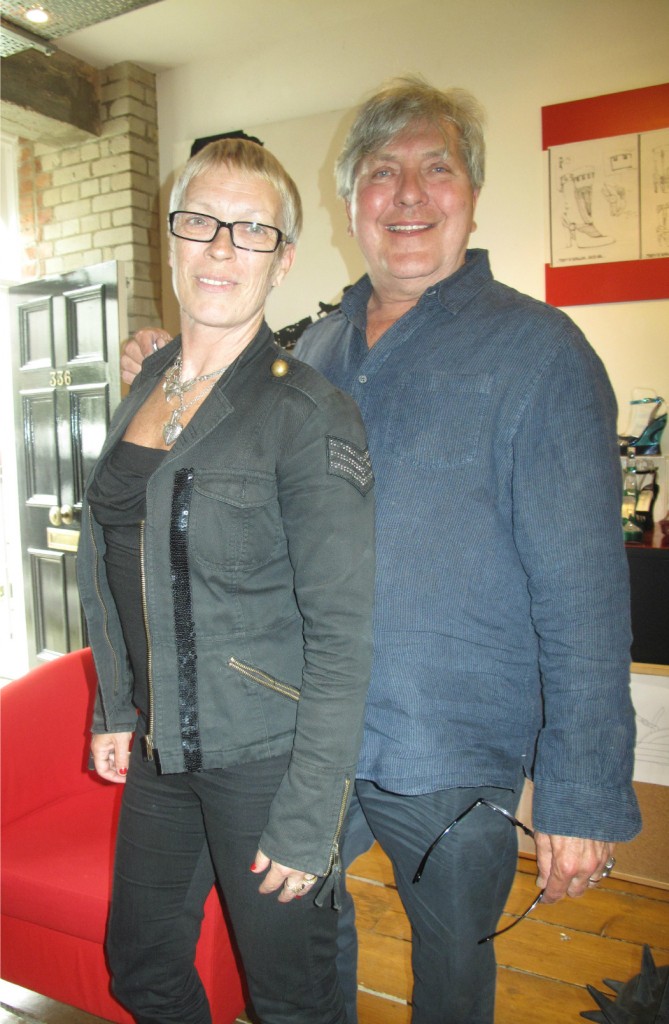 Liz and I tweeted each other a lot during my Topshop ring-ripoff experience. When I went to visit their groovy studio, I found out why Liz was so interested in my situation. 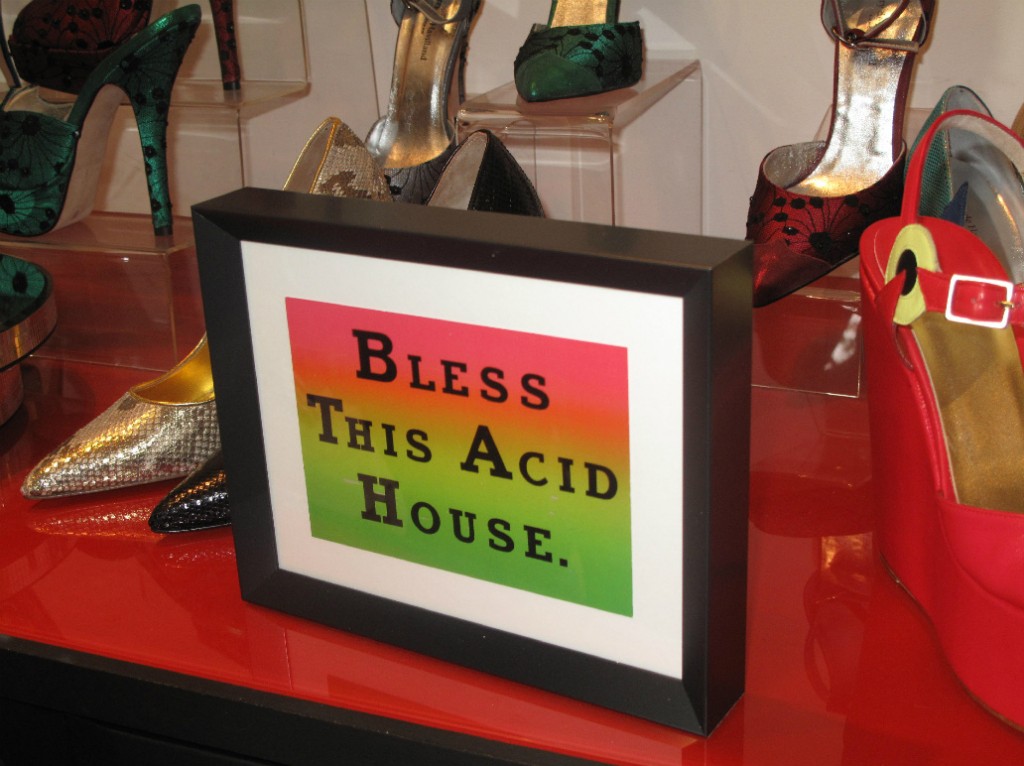 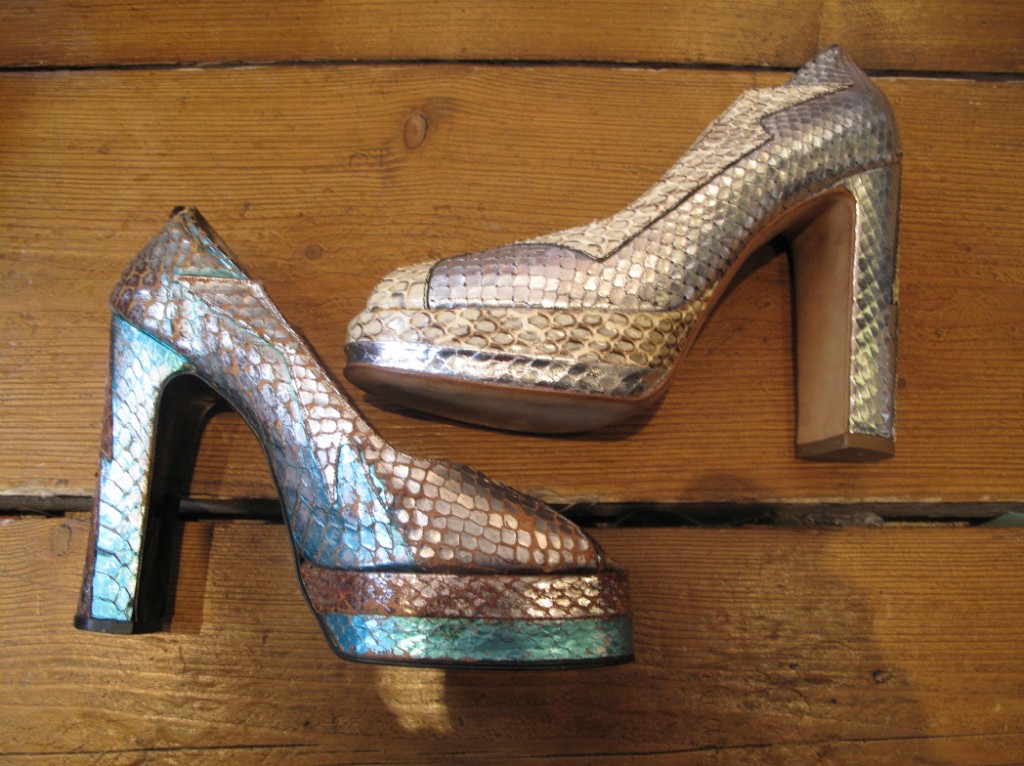 Terry’s shoe is the lower left one; Miu Miu is upper right.

I’ve been a long-time fan of Terry’s work — you can’t love vintage Ossie Clark clothes and not love de Havilland shoes, with their similar sexy, rock-star vibe (a pair of de Havilland shoes made the cover of Playboy). Let me put it this way: Kate Moss has worn both labels. Led Zeppelin, David Bowie, Cher, ’60s songbird Marianne Faithfull, Naomi Campbell, actress Sienna Miller, the late Amy Winehouse and current “It” girl Cheryl Cole have also been de Havilland customers. I’ve also known a couple of avid collectors of vintage Terry shoes. However, I missed the BBC documentary series, Trouble at the Top, that featured Terry in 2003, when he was trying to get some recognition from Miu Miu. “They [Miu Miu] probably thought I was dead” so no one would complain, Terry told me cheerfully. With no knowledge of the history of these shoes, I honestly thought that both designs were Terry’s even as I held them in my hands. I’d say that’s the definition of copying, as opposed to inspiration or interpretation. You can see the documentary in four parts on YouTube. Here’s Part 1.

You can see the other three parts here.

I didn’t know it but my 6.5 foot is sample size, so I went wild trying on the samples in the studio. I was impressed by how comfortable they were, even the towering wedges and mules. Terry said Liz would never allow him to make an uncomfortable shoe.  (Liz was all like, “You bet your ass.”) Also, having made drag-queen shoes, Terry’s tried on heels himself and understands what women go through. I was also impressed by the surprise elements in the shoe designs because I’m passionate about incorporating surprise elements into my jewelry designs. For instance, Terry had shoes that glow under black light, which made me want to go to a club for the first time in a long time. 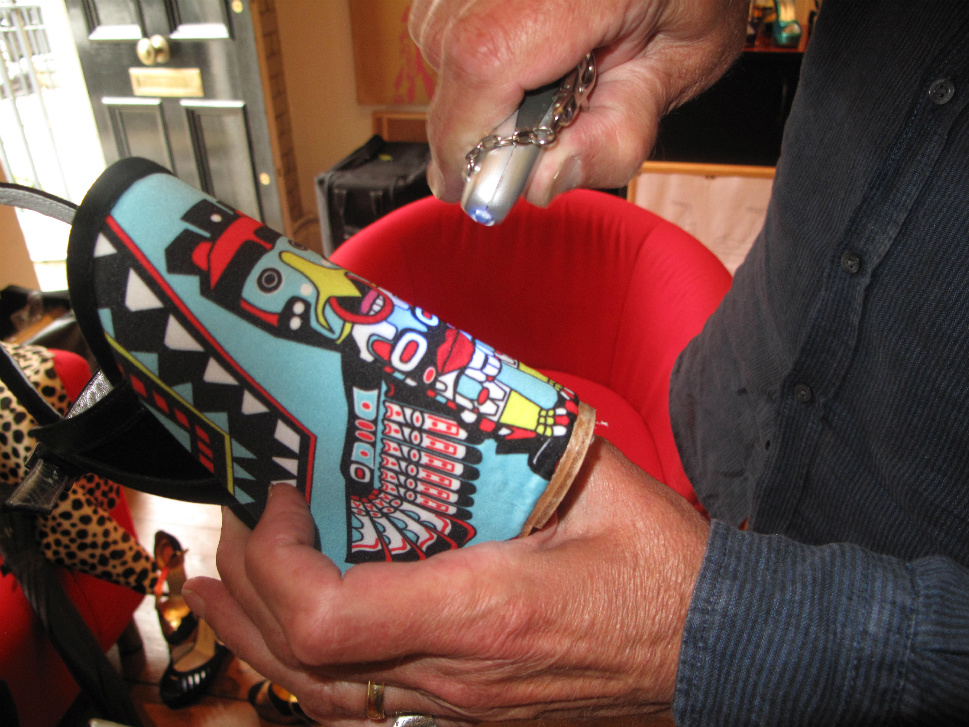 I couldn’t really capture the effect on camera, but it was fabulous. 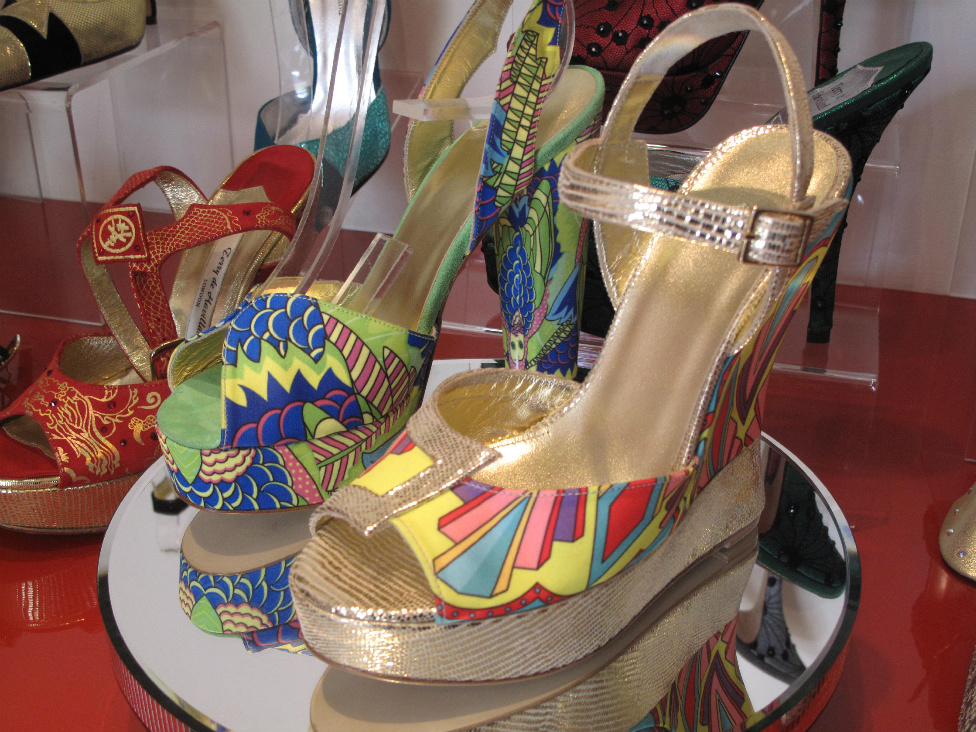 There were mules with charms on the heels and a boot with a nude woman on its heel. 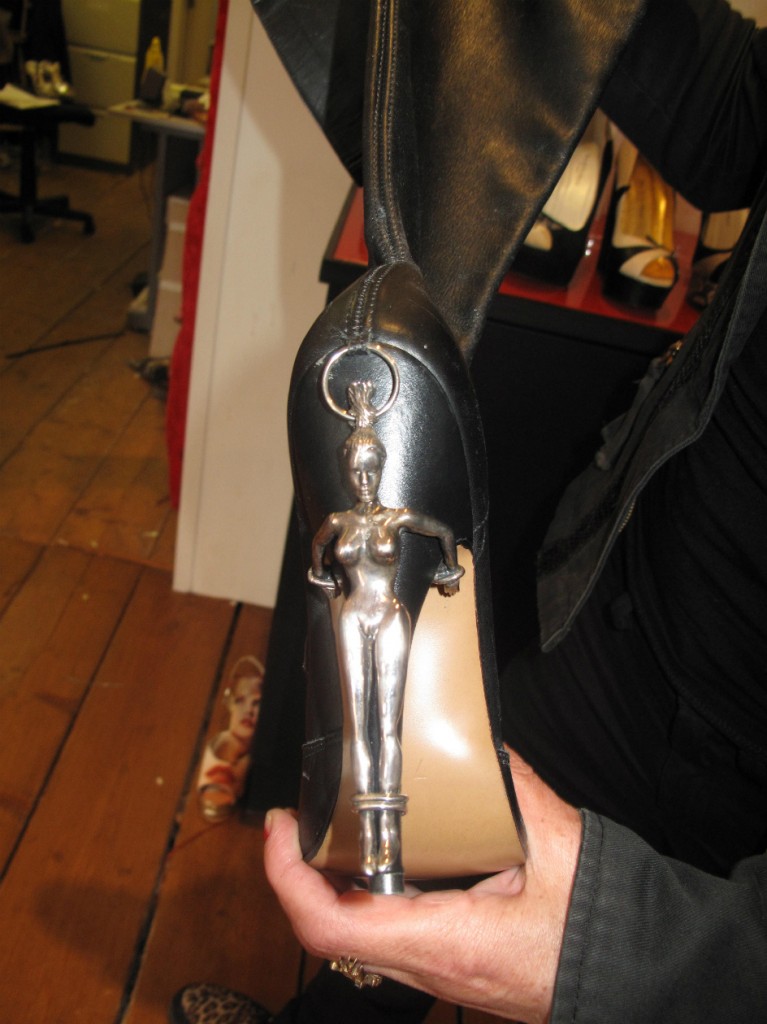 Because I’m an award-winning swearer, I nearly lost my mind when Terry showed me the sole of his own boot. 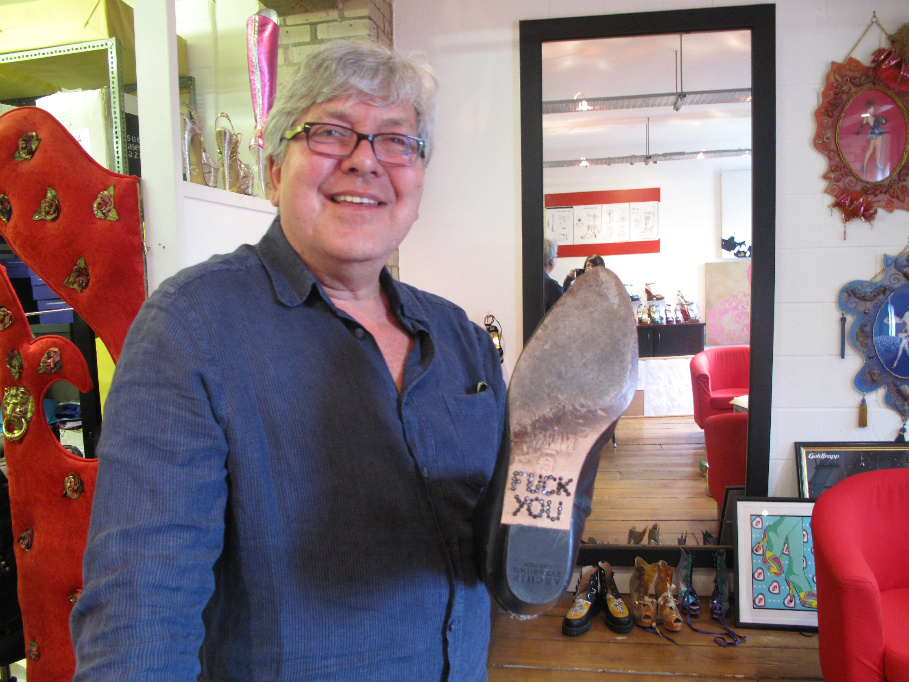 The shoes Terry made for Kate Moss’s wedding gift said “Fuck you” on one shoe’s sole and “Fuck me” on the other. Love it! It was encouraging to see that, like me, Terry doesn’t hold back when designing. I told him and Liz that I often got unsolicited advice from people with no manufacturing experience; they think that if I dumbed down my jewelry, my prices would become competitive with Forever 21 or Walmart (wrong, but at least those conversations helped inspire my IDGAF necklace). Terry said, “My life changed when I decided I wasn’t going to make shoes for a ticket; I’d make what I want and see what it costs.” My hero!

Terry and Liz have a store in the pipeline. In the meantime, you can find the shoes at Matches and Terry’s website. Terry’s and Liz’s website, I should say, because Liz is a big part of the business. I had a great time chatting with her, especially about Terry’s decadent days of Champagne, caviar and cocaine in the 1970s. I enjoy hearing similar stories from my friend Al Radley, the owner of the Ossie Clark brand, whom I visited right after seeing the de Havillands. (Al was a straight arrow but he got to see everyone else carrying on.) I was late to Al’s because it was so hard to tear myself away from the de Havillands. I swear, I would have bought one of every shoe style, except they were all samples and not for sale. But there was a pair of very narrow, limited-edition shoes from a 2004 event. I have a very narrow foot. I felt like Cinderella when Terry and Liz gave me those shoes. And I can hardly wait to show them to you … but I will wait. Mwah ha ha ha. Come back tomorrow for the post with my de Havilland shoes. You’ll understand when you see them.

You might also like
Wednesday's Video: Digging Deep in the Shoe Archive
Foot Fetish: Fluevog, McQueen, Ferragamo
Yves Saint Laurent Dies at 71
Previous Post: « Usher Was at the BET Awards; Nick Rhodes Is an Icon
Next Post: What Wendy Wore: Happy 4th of July! »