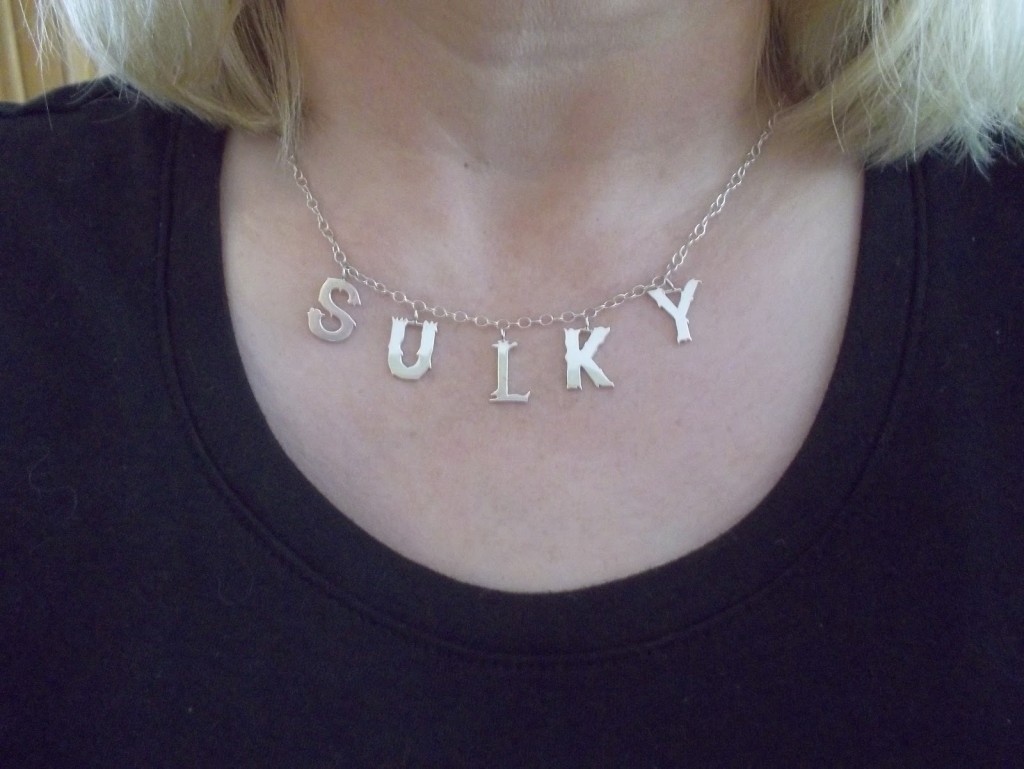 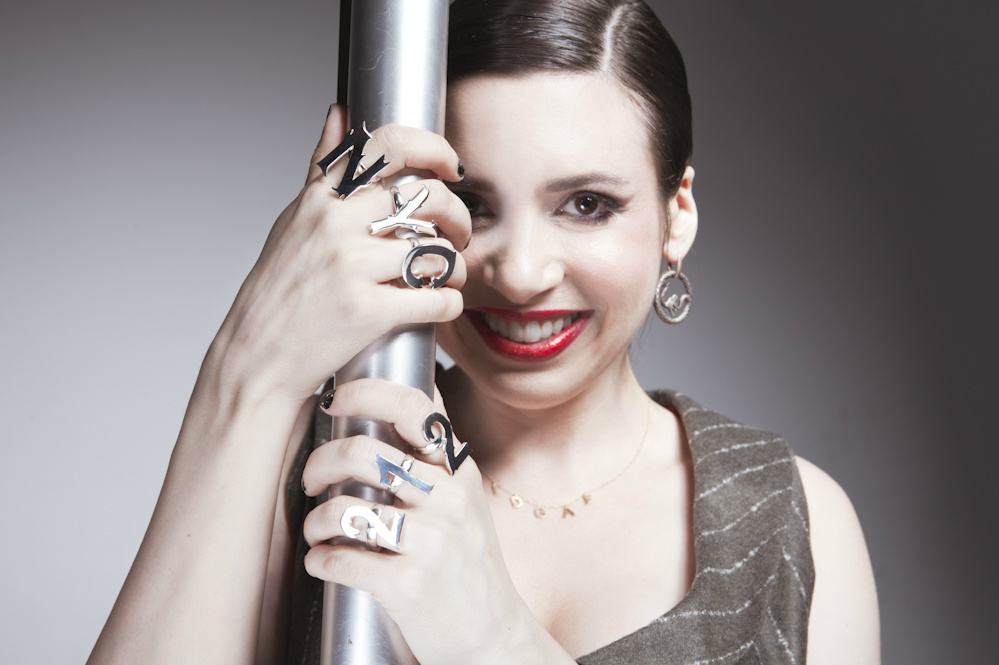 I’ll have two new sterling-silver IDGAF necklaces available later this week: one 10-millimeter size ($500) and one 5-millimeter size (less than $500; price to be finalized this week). If you want to reserve one (or both) of those, email me at wbjewelry at hotmail dot com, and it will be in the mail this week.

While I’m on the topic of word/letter necklaces, I should mention that one jewelry style that I won’t do is the script nameplate necklace that was popular when I was growing up. As every fashionista knows, Sex and the City brought that back in a big way with the “Carrie” necklace. 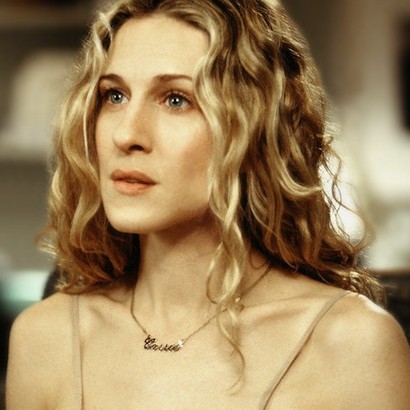 … and here’s my solid sterling-silver version. It’s 3 1/2-inches long. There are little diamonds at the top of the “G” and the “B.” 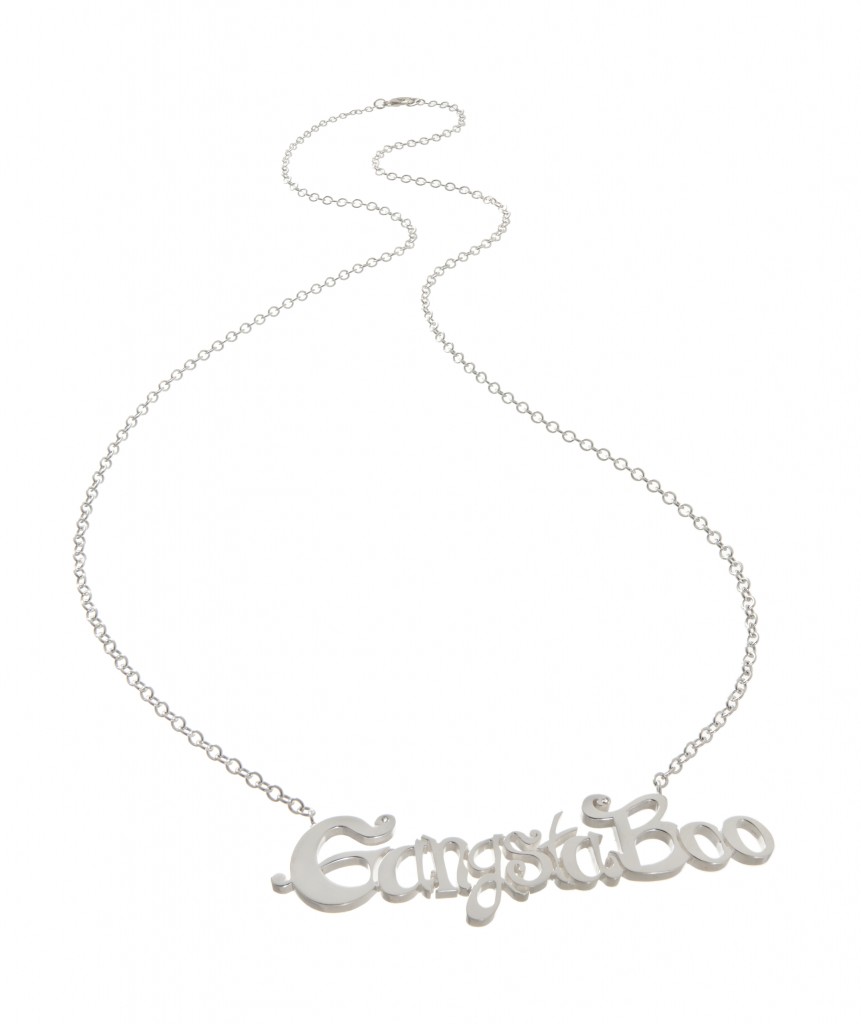 Those capital letters posed a little bit of a challenge. On the “G” end, the chain only looked good when attached to the top of the letter, rather than the side. But the lowercase “o” in “Boo” is much shorter than the “G,” so the chain looked uneven. I considered putting a rectangular or oval frame around the entire name and attaching the chain to that, but the extra metal took attention away from the lettering.  Instead, I attached the chain to the two capital letters. I wore it around the house for a few hours to test it out and it was well-balanced that way.  (To be absolutely sure it would work for Boo, I rapped “Where Dem Dollas At” and “Throw It Up” into a hairbrush while wearing the necklace. No, there’s no video for you to see.) 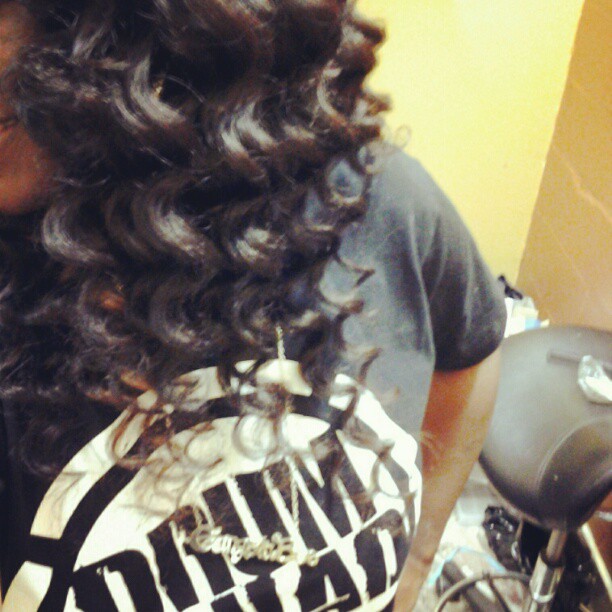 I love heft in my rings and necklaces and Boo’s piece is no exception (I try to make earrings as light as possible). Photos don’t capture the weightiness of my designs. You have to feel them to believe them; some are made from more than an ounce of gold. The amount of metal I use takes people by surprise. That’s true now more than ever because as metal prices have soared, a lot of jewelers have cut back on the amount of metal they use.  Making lighter-weight jewelry saves a lot of money, and you can still get a “big” look. For instance, a large semiprecious gem in a simple, lightweight prong setting is eye-catching but much less expensive that a ring of that size would be if it were all gold or silver.  Plenty of people suggested I lighten my designs too and I seriously considered it. But I realized that wouldn’t make a small business like mine competitive on price with mass producers. I think that if price isn’t going to be a major selling point, then quality should be, and for me, quality means something that feels as important as it looks. I like to keep a made-in-China gold knuckleduster ring around, just for comparison. I make customers hold out both hands and I drop the mass-produced ring in one hand. Then I drop one of my rings in the other hand. Then they get it!

If you’re in the Los Angeles area and want to feel my jewelry for yourself, visit Broken English Jewelry in Santa Monica, Calif. The 18K gold and black diamond Gravity ring is a particularly good example, as you might guess from its name. If you’re buying online, you’ll just have to prepare yourself.  Maybe you should lift weights, like model Tina J, to get ready. 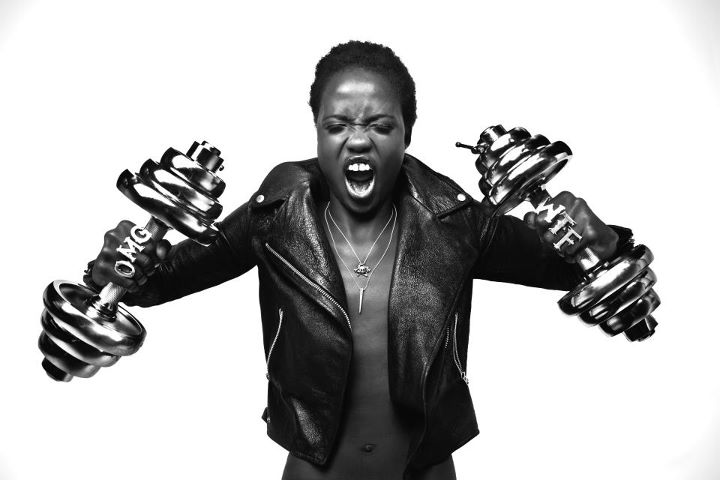 And if you want a big, fat nameplate necklace — in a special font! — holla at me at the same email as above: wbjewelry at hotmail dot com.

You might also like
Throwback Thursday: What Wendy Wore in January
Two -- TWO! -- WendyB Events in the Big Apple
Boudicca Jacket
Previous Post: « The Cost of Iced Coffee
Next Post: Mullet Dresses Are Going Strong »