You’ve got until Sunday, Aug. 2, to catch actor Jim Parsons (aka Sheldon Cooper on The Big Bang Theory) in An Act of God at Studio 54. 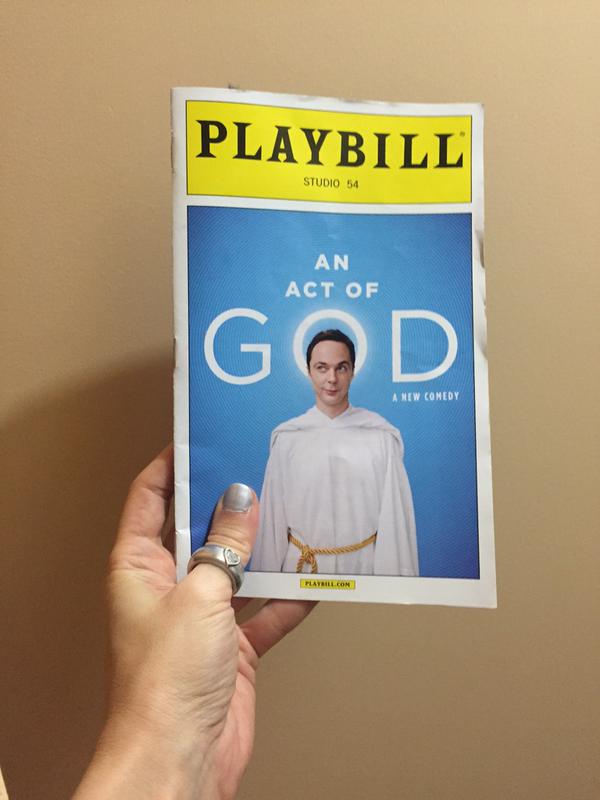 Parsons plays God, who is wrestling with “wrath-management” issues while he’s in the midst of updating the Ten Commandments. The by-the-book angel Gabriel is played by Tim Kazurinsky and the concerned and questioning angel Michael is played by Christopher Fitzgerald. Highlights include the true story of Adam and Steve in the Garden of Eden (God isn’t anti-gay: “Gay, straight, bisexual, transgender; thou art all equally smitable in my eyes.”). I also liked the stories about God’s three children:  Zach, Jesus, and Kathy. Wouldn’t you know it? Jesus had middle-child issues.

Here’s what I wore to see God when we saw Him last Saturday.

Maybe it was divine intervention, but all my old(ish) clothes felt like new again that night!

You might also like
China at the Costume Institute, Zang Toi at NYFW
What Wendy Wore: Moschino and Zandra Rhodes, Again
Old Shooz and Final L.A. Photos
Previous Post: « The Financial Times on Consignment Practices
Next Post: Throwback Thursday: The Right Way to Shoot Lions »