Forget about the wrinkly elbows. Realizing I had missed last week’s hot new Internet meme/website made me feel old and out of touch. The fact that I only learned of it today by reading the quaint paper version of the New York Times pegs me as ancient. (Damn! When have I ever needed to learn about new media from traditional media?) Just when I thought it couldn’t get worse, the meme became so successful that the website creators decided to go out on a high note: They shut down their site before I could even post about it. I’m officially Methuselah!

In case you also missed out, here’s the speed-of-light tale of Texts From Hillary Clinton. Last October, two photographers — Kevin Lamarque of Reuters and Diana Walker of Time — took pictures of Secretary of State Hillary Clinton on a plane. Clinton, wearing sunglasses and wielding her BlackBerry, looked tough and chic. A welcome change from the cheap-ass hair clip catastrophe of 2010! Stacy Lambe and Adam Smith, both communications professionals in Washington, D.C., were inspired last Wednesday to create a site that paired the Clinton pictures with pictures of other famous people using their phones. They and other contributors came up with imagined text conversations for each pairing; in each case, too-cool-for-school Clinton provided the zinger. Clinton is seen rejecting Mark Zuckerberg’s friend request, giving a “bitch, please” to Sarah Palin,  and rejecting Jon Stewart’s show in favor of Stephen Colbert’s. One of my favorites was Clinton’s reaction to a missive from disgraced sexting politican Anthony Weiner. 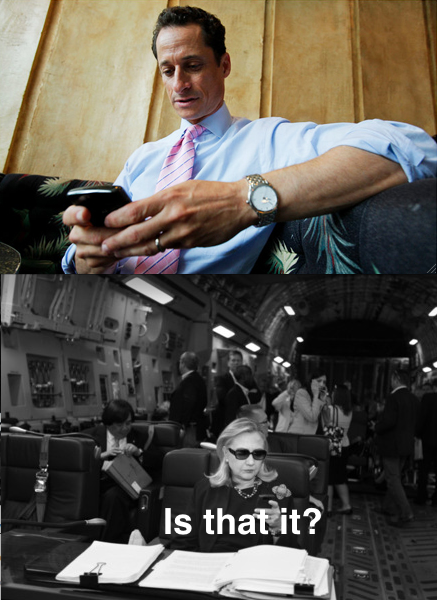 Yesterday, Lambe and Smith got a submission from Clinton herself, as well as a photo op with her. Calling the response to their creation “overwhelming” and “hilarious,” they said goodbye today:

“As far as memes go – it has gone as far as it can go. Is it really possible to top a submission from the Secretary herself? No. But then when you get to text with her in real life – it’s just over. At least for us. But we have no doubt it will live on with all of you on the Internet.”

“It turns out,” they concluded, “that memes really do come true.” I’m sorry to see them go so soon but I’ll treasure what they did. I’ve defended Clinton’s lack of interest in fashion, and reluctantly drawn the line at her hair-clip disaster. It did give me a thrill to see her looking bad-ass, just as I was happy to see her having a “Wear What You Want” moment in February. I give hot Hillary — and her meme — two snaps up!