When I made an appointment with celebrity manicurist Tracylee Percival this week, I warned her that several of my nails were so badly broken that they weren’t suitable canvases for one of her artistic gel manicures. I thought the stubby nails weren’t going to be worth much more than clear polish, but Tracylee cheered me up by bringing Sally Hansen Salon Effects nail polish strips. Sally Hansen calls this black-and-white pattern “Tri-Bal It On.” To add a little color to the look, I put on my 18K gold, diamond and chalcedony Primavera ring design. (The ring is on sale; click here to purchase.) 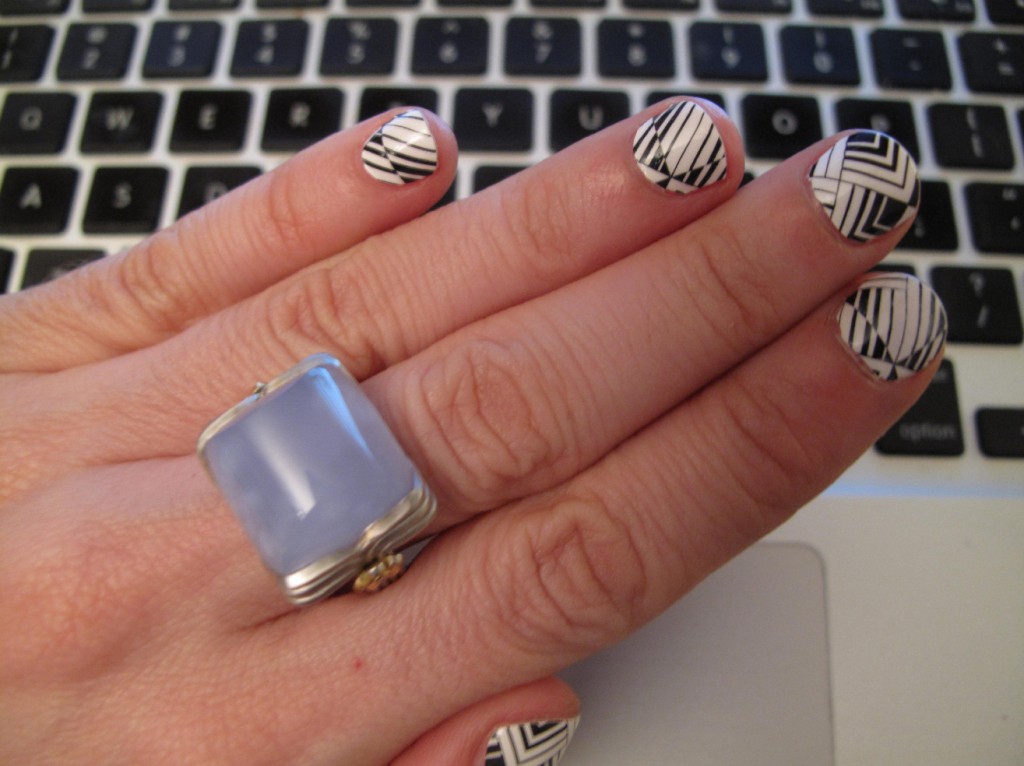 Look at how short the nails are on my ring finger and thumb!

You can get the Sally Hansen strips at a drugstore and do this at home if you’re good at giving yourself manicures (I’m not!). The box includes a cute little nail file, plus a cuticle stick and buffer. The strips are made out of real nail polish with a sticky side so you can apply them to your nails. I always chip regular paint-on nail polish within 24 hours, and so far this product is holding up well. It can be taken off with regular nail-polish remover.

Tracylee was able to reshape my broken nails but she couldn’t do anything about the little scratch on the back of my hand. 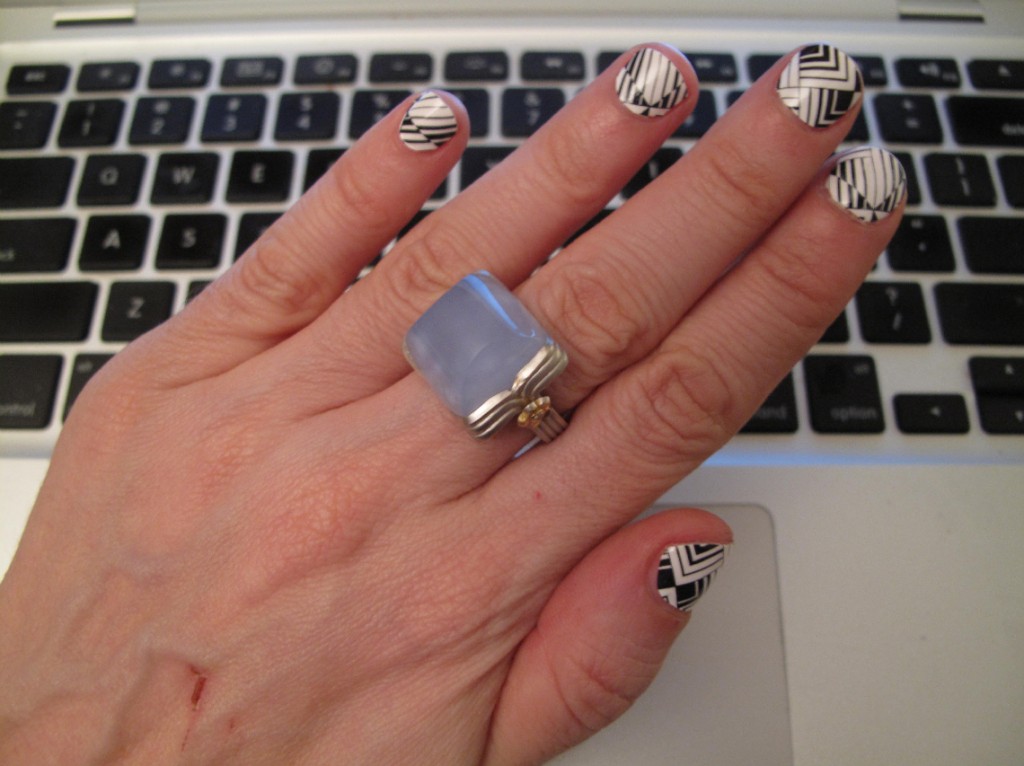 That’s from my stepson’s cat, Portia. My stepson came home from college for spring break last week and brought the cat along. She didn’t scratch me on purpose. I was holding her in the hallway outside my apartment, waiting for a friend to come up in the elevator, and Portia got scared when the elevator door opened. While she was writhing around, trying to run away, a claw got me. Other than that, Portia kept her claws retracted all the time, even when I tickled her little paws. The only major damage I suffered was getting a Ted Nugent song stuck in my head. It is a good song, though.

Gigi the dog had a great time playing with the cat. I always thought Gigi was a cat person. She’s never liked any dogs other than Henry. 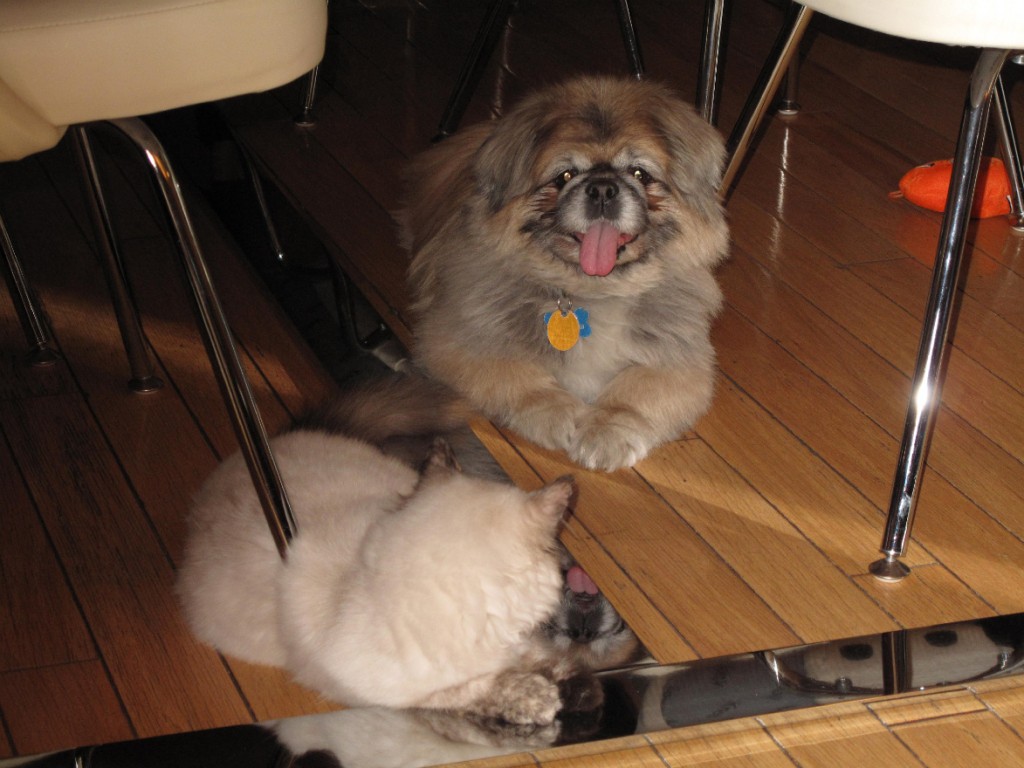 Hanging out under the dining room table.

Henry was only interested in Portia for about ten minutes. He didn’t acknowledge her again after that, even when she pounced on him. He was rolling around on my lap while I was taking pictures of Gigi and Portia. I tried to take a close-up photo of Henry too, and it came out crazy. 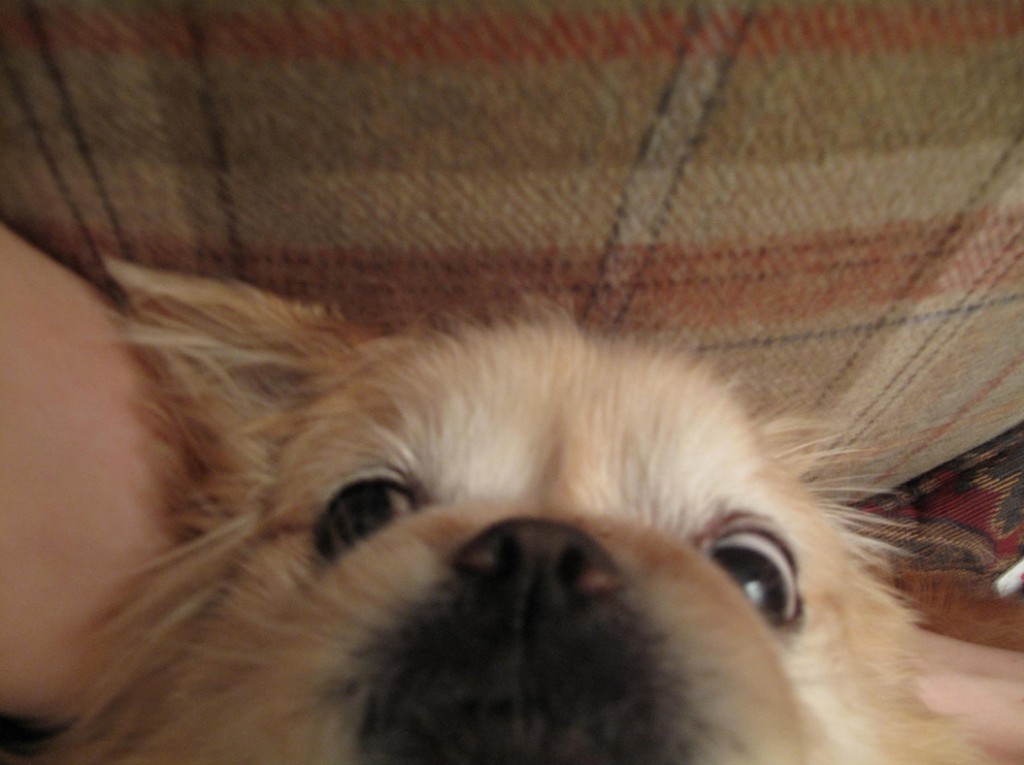 On a totally different topic … if you haven’t read my Huffington Post story about a dress designed especially for the Nobel Prize ceremony, check it out now. Then read about how I came to write the story here.