I have a new story on the Huffington Post. It’s about Jenny Carroll, the daughter-in-law of Dr. Ralph M. Steinman. Dr. Steinman, a professor of immunology at Rockefeller University, died three days before he won a Nobel Prize for medicine. Nobel Prizes aren’t normally awarded posthumously but, because the deliberations were conducted without knowledge of Dr. Steinman’s death, the Nobel Foundation reaffirmed his prize. His family was invited to the ceremony.

I was introduced to Jenny by Jean Kormos of Ghost Tailor, who piqued my interest when she told me she was making a special dress for Jenny to wear to the Nobel ceremony. I’ve gone to Jean for my tailoring for many years. Jean is very familiar with my jewelry line and knows how much I appreciate symbolism in design. An example of this in my own work is my Queen Min ring. 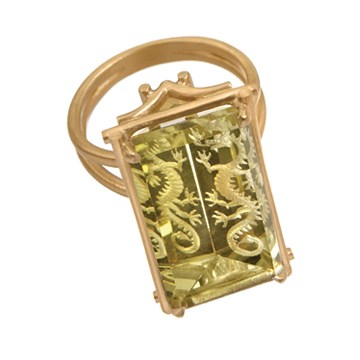 Queen Min was the last empress of Korea, assassinated in 1895. No photos of her have been identified beyond a doubt, so her image remains elusive. Accordingly, a single dragon is etched into the underside of the lemon citrine in this ring. Depending on which way you hold the ring, the reflection appears or disappears on the opposite side — as difficult to pin down as Min herself. To reinforce the Korean connection, the setting for the stone is shaped like a pagoda.

Anyway, when Jean told me she was silkscreening images of immune-system cells on the dress, I asked for Jenny’s contact information. But it wasn’t just the dress that I wanted to ask Jenny about. Dr. Steinman’s story had made an impression on me when the Nobel Prizes were announced on Oct. 3, 2011. I generally try to avert my eyes from the comments section on news sites, because of the aggression and stupidity that run rampant there. I suppose I looked at the comments on the Steinman articles because I couldn’t see how anyone wouldn’t be sympathetic toward a man who died of cancer while trying to cure cancer. But my imagination failed me, because plenty of people were coming up with conspiracy theories about how the death had been concealed to maintain eligibility for the prize, even though nominations for the Nobel Prizes are kept secret, rather than revealed publicly Academy-Award-style. Now, I love winning a prize as much as the next person, but I can envision times when a prize opportunity might not be at the forefront of my mind: for instance, if I or my loved one were dying. So I wanted to know what Dr. Steinman’s last days were like, emotionally, for his family. Jenny told me about her elder daughter, seven-year-old Isla, who has always been interested in science. Isla and Dr. Steinman used to have serious discussions about science and health issues. (Once, when Jenny told Isla to rest because the child had a cold, Isla called her grandfather to ask whether studies have proven the efficacy of rest in relation to curing the common cold.) Dr. Steinman and Isla had spoken about how everything has a time to die. Jenny said:

“The last week was really bad but [Dr. Steinman] had moments when he was incredibly lucid. He would talk [to her two daughters] — not for long periods of time — but it was nice to know that they had that chance to say goodbye to him. Isla came in and said, ‘I think it’s your time to die’ and he said, ‘Thank you for letting me go.’ And she said ‘I’m going to miss you.'”

I had tears in my eyes just hearing this discussion secondhand, so I can’t stand to think about how it would be to hear it in person. I knew right away that I’d never fit the anecdote into my Huffington Post story, but I wanted to share it here to shed a little light on the family’s experience.

To learn how Jenny expressed her feelings through fashion …