Nearly one year ago, I wrote about crowdfunding site Kickstarter for the Independent Fashion Bloggers website. Kickstarter provides a platform for would-be entrepreneurs to announce a project, set a target financial goal and a target date for raising that sum, then solicit pledges that are processed via Amazon. The donors’ accounts aren’t charged unless the fundraiser meets his or her target investment by the target date. If the full amount isn’t raised, the fundraiser doesn’t get anything.

I got an up-close-and-personal view of the Kickstarter process thanks to gorgeous clothing designer and fashion blogger Stacy Lomman of taffetadarlings, who financed her Spring 2011 “Precious Metals” collection and runway show — her first collection under her own name — through the site.

Her successful effort was covered by the Huffington Post, Life.com and WWD.

Stacy's sketch and mention in WWD. Click to enlarge.

As I’ve explained on this blog, fame doesn’t equal fortune, so Stacy went back to Kickstarter to finance her Fall 2011 collection, which was inspired by the women of the French resistance.

All kinds of exciting things happened for Stacy after that collection — including interest from CBS News and coming “THISCLOSE” to being cast on two different fashion reality shows. But she’s still waiting for that big break. I know the feeling, and I’ve been in business since 2005. There are all kinds of little profile-raising successes but those don’t mean you get the big orders from stores that would make producing a new collection any easier. So Stacy is back on Kickstarter for her Spring 2012 “Biohazard” collection. Stacy says:

“The concept behind the collection stems from the chaos happening in the world, from the economy to all of the natural disasters that have recently occurred (and will continue to do so). The need to start dressing for protection is inevitable and our wardrobes will have to be fashionable AND functional — think ‘chic hazmat’ gear!”

Very creative! Click this link or the widget below to go to her Kickstarter page and make a pledge that will help a talented designer get to the next level.

It’s not just about doing a good deed. You can also get some cool stuff. There are enticing options for a variety of pledge levels. For instance, rubber wristbands that say BE FASHIONABLE – SUPPORT AMERICAN DESIGN go for $20, while a $2,000 pledge will get you a custom-made, custom-fitted piece from the Biohazard collection. There are lots of options in between, including the $550 level, which is a custom-made, neoprene motorcycle jacket. Stacy’s only doing two of those and — it should be no surprise — I’ve already signed up for one. Get the other while the getting is good!

Read Stacy’s blog post about her Kickstarter project to gain an understanding of her determination … and then show her some love! 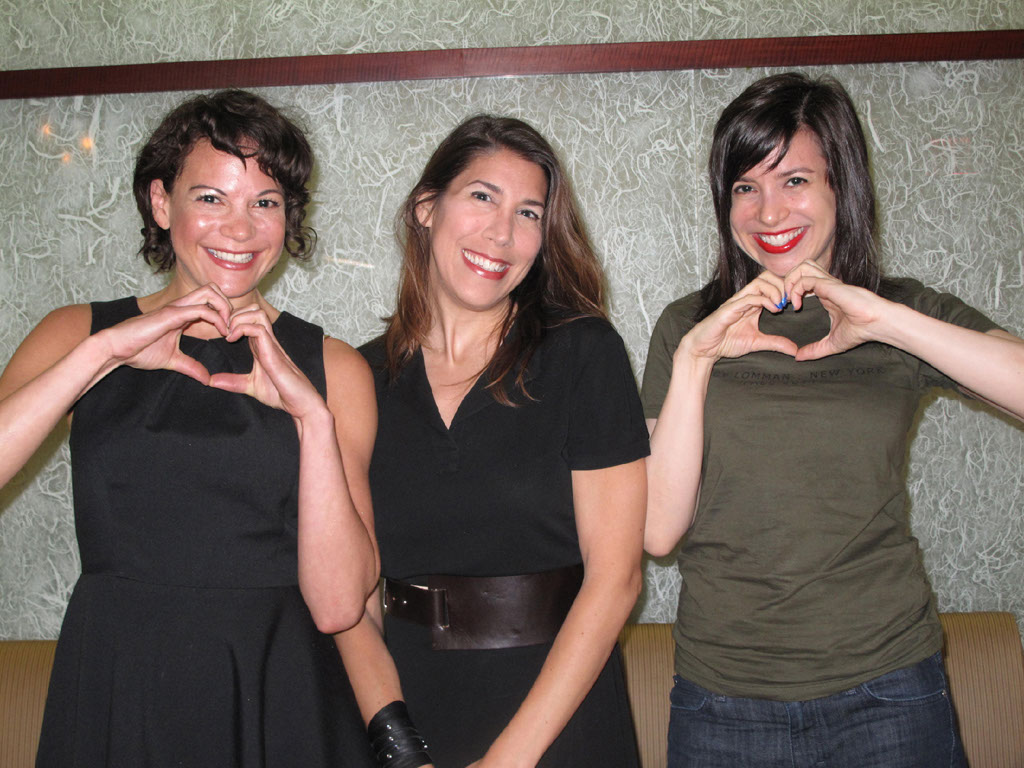 Stacy's team. From left: Sylvia, the show coordinator; Stacy, the designer; and me.

You might also like
London, Day 1: Standing in the English Rain
The Great Pink Hype
I Thought I Looked Purrfect
Previous Post: « What Wendy Wore: Meeting Susu in Paris
Next Post: No Cheap Tops for Me, But a Good Reminder About Rarity »