At the end of last month, an article in the Wall Street Journal — by my former colleague Teri Agins — caught my eye. It was about the awesome tops she found at fast-fashion stores for under $30. Lately, I’m desperate for separates that aren’t black t-shirts, so I was inspired to venture into Forever 21 and Zara the very next day. I quickly realized that I needed someone with Teri’s flair to join me on this shopping trip because I couldn’t find a thing on my own.  Oh well! 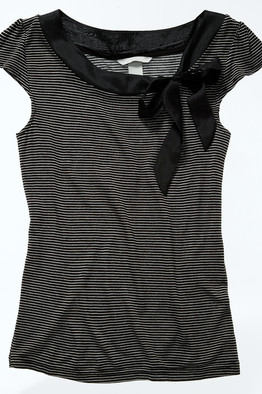 An H&M top from Teri's story. Click for more.

Despite my lack of shopping success, the article has stayed in my mind because of this quote from Norma Kamali about the quantity of product made to be sold at this pricepoint. Bold emphasis is mine:

“‘The number of units they produce are the key factor, hundreds of thousands, and that is why these manufacturers have to be really good,’ says Norma Kamali, a veteran womenswear designer who created a sportswear line for Wal-Mart for three years, ending this spring.”

Information like this has jumped out at me ever since I wrote my Get Smart posts about manufacturing and quantity. Those posts explained economy of scale — the way making more of an item brings down costs — and how challenging it is for a small business to make enough product in order to get the price breaks that quantity brings. The most I’ve ever made of one style is 100 units. I’ve made a few styles by the dozen, but most pieces are made one at a time. Until I get mass distribution, it doesn’t make sense to make more. For example, I recently pondered making a popular ring style in brass because I wanted to make it accessible to more people. Let’s say I could make it for $5 and sell it for $10.  The minimum order was 250 units but I’d actually have to sell a thousand units to equal the profit I’d make from the sale of one gold piece. If a store were willing to buy a thousand units, it might be worth doing, though 10,000 units would make more sense. But imagine trying to sell a thousand units on my own, from my website, one at a time. That’s a thousand jewelry boxes, a thousand trips to the post office. The potential earnings wouldn’t justify that much effort. So for now, when you buy something from me, you’re getting something incredibly rare. Yes, it’s more expensive than mass-produced jewelry, but at least you can feel very special wearing it. Just something to think about while you browse my website!

And yesterday, I wrote about Stacy Lomman, a fashion designer who is trying to put on her third runway show without the help of a giant company’s overseas manufacturing muscle. Want to make a fabulous fashion statement? Skip buying one $20 top from Forever 21 and contribute to Stacy’s Kickstarter instead. After all, F21 won’t personally thank you for buying one of its thousands of units, but Stacy will appreciate you forever.

CLICK HERE TO BE THE ISABELLA BLOW TO STACY’S ALEXANDER MCQUEEN.