I saw Lady Gaga at Radio City Music Hall on Thursday and she kicked so much ass that I’m traumatized … traumatized that I didn’t get tickets for a second night. What was I thinking? I should have known once wasn’t enough! I realized that about Madonna years ago and now I always buy tickets for two nights of each tour. I haven’t missed a Madonna tour since the first time I saw her in 1985, when I went to her Radio City Music Hall concert instead of my high school’s senior prom. I made my gorgeous mother BarbaraB buy me an outfit for the occasion. If she was willing to buy me a prom dress, I successfully reasoned, she should buy me a Madonna concert outfit.

I didn’t make BarbaraB buy me a new outfit for the Gaga concert, though maybe I should have tried. Nothing ventured, nothing gained, right? But I was happy to wear my Steve J & Yoni P jacket (which I’ve also worn to see — guess who? — Madonna!) with American Apparel latex-look leggings. I never know what to wear with those leggings because generally leggings shouldn’t be worn as pants, yet I don’t like to wear the long tops I wore with leggings in the ’80s. It was a happy moment for me when I realized that pants are most definitely not required for a Gaga concert. I also wore ’80s-looking Ruthie Davis platform boots that I got a couple of years ago in a fit of nostalgia. They never really looked right with anything until now. Another happy moment!

For hair, superstar stylist Julie Matos gave me curls inspired by Gaga’s in the bathtub scenes of the Bad Romance video. 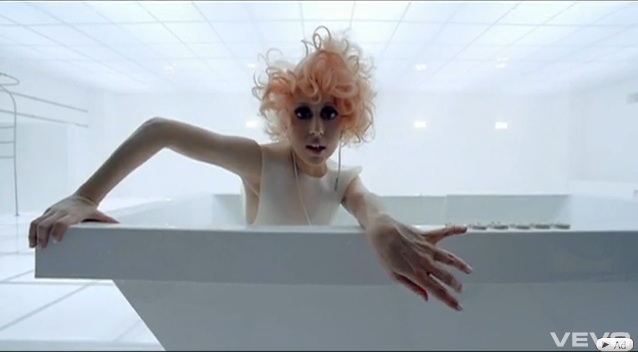 My major lashes and geisha lips were a tribute to the Paparazzi video.

The pièce de résistance was supposed to be my customized G-A-G-A swear rings. I had a tight turnaround time for a new design, so I did two Gs and hoped that the “a” in the middle of the @ signs would look like the letter A. Unfortunately, the “@” looked more like an O, so I wound up with rings that spelled “G-O-G-O.” I also wound up with the old Wham! song Wake Me Up Before You Go-Go stuck in my head until Lady Gaga took the stage and liberated me from both the tune and bitter regrets that I tossed my original ’80s Wham! concert t-shirt many years ago. I don't have much of a p-p-p-poker face.

I was joined at the concert by my gorgeous food-blogging and Minx-wearing friend Tina, who was be-wigged and be-lashed Paparazzi-style. 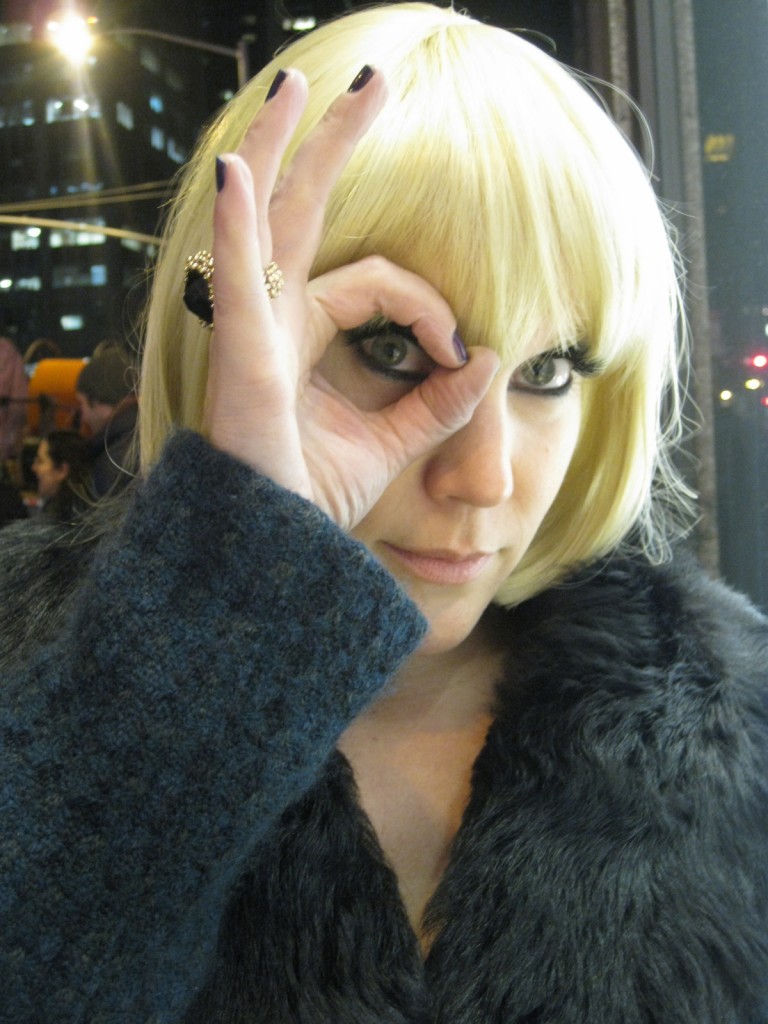 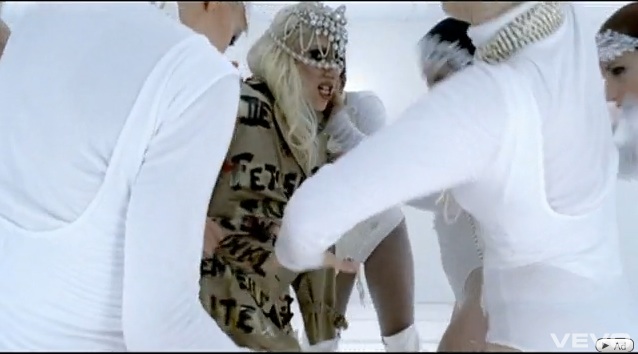 I was going to take a picture of the coat couple, but I thought, “Nah, there will be so many unbelievable costumes, I don’t have to chase these down.” I regretted it because people did not rock it out like I expected.  Yes, there were blonde wigs, lightening-bolt eye makeup, hair bows made of hair, rainbow boas and leotards, but I thought there would be more insanity like the guy in the Bad Romance white-latex-with-crown look. 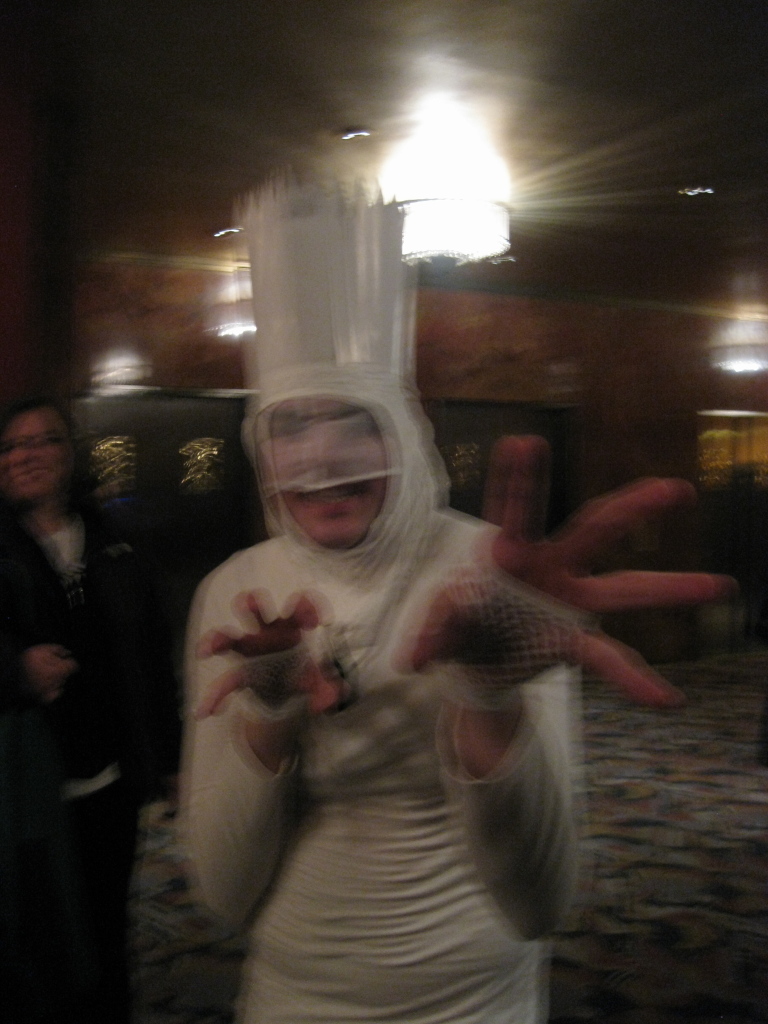 Tina and I kept looking around, wondering where all the crazy costumes were. Meanwhile, other people were taking pictures of US thinking WE were wearing crazy costumes! I was like, “Bitch, please! If I’d worn this in 1985, my friends would have said, ‘Next time, try dressing up a little.'”

I had another “Bitch, please!” moment while buying my nipple-tape t-shirt. Young girls nowadays are not being brought up right. They don’t know how to assert themselves in the t-shirt counter line. Personally, I don’t throw elbows or kick or bite … anymore. I just politely push your ass out of my way, lock eyes with the t-shirt seller, order my shizz and get out of there. Dear girl standing to my right: When the dude says, “Who’s next?” you don’t stand there mute for 10 seconds and then whine, “I was here first.” Have some pride! Think of Lady Gaga! She would not be where she is today if she couldn’t even hold her place in a t-shirt line.

Speaking of Lady Gaga, some of you are probably wondering about the concert itself. Well, it was fucking fantastic. Obvs! I can’t compete with music critic Jon Pareles when it comes to writing about concerts, so you should read the New York Times review of Wednesday’s show here. These are my best photos. 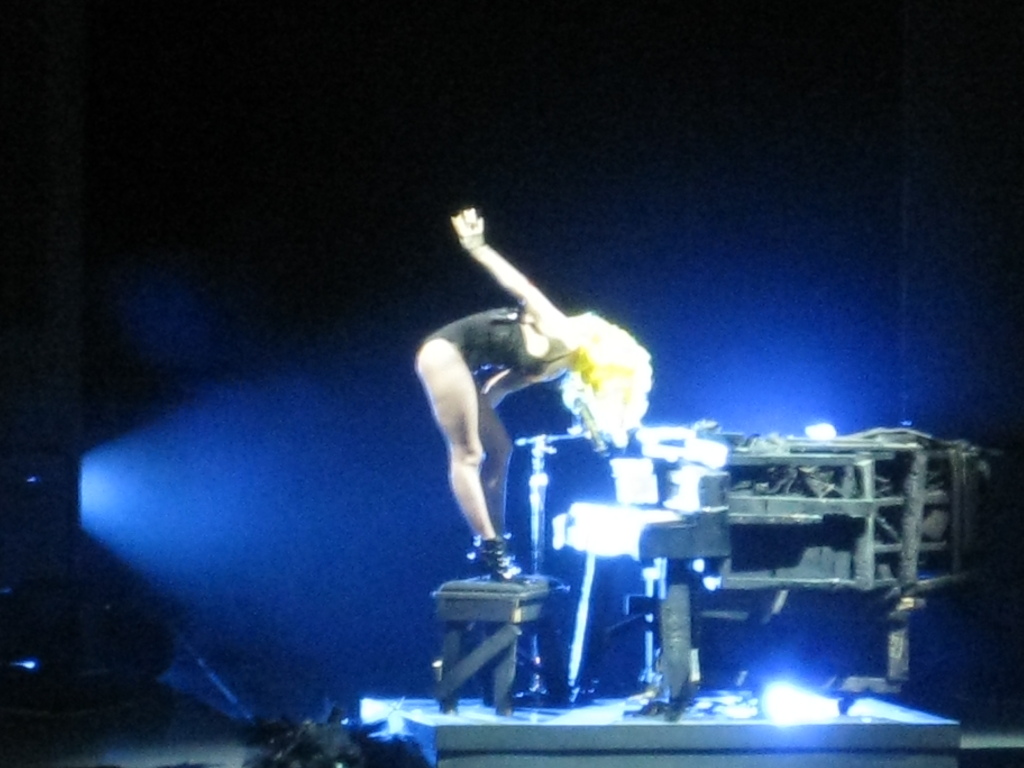 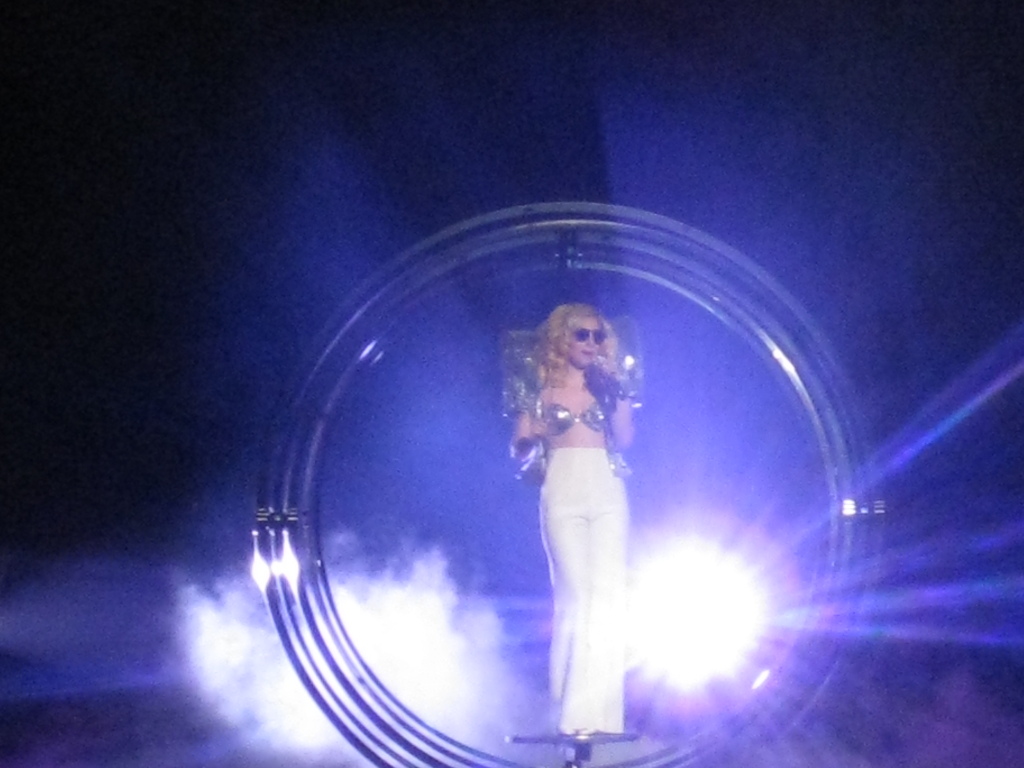 This next one is my favorite shot because if I squint my eyes, use my imagination and drink two glasses of white wine, it looks sort of like the fire scene in the Bad Romance video. 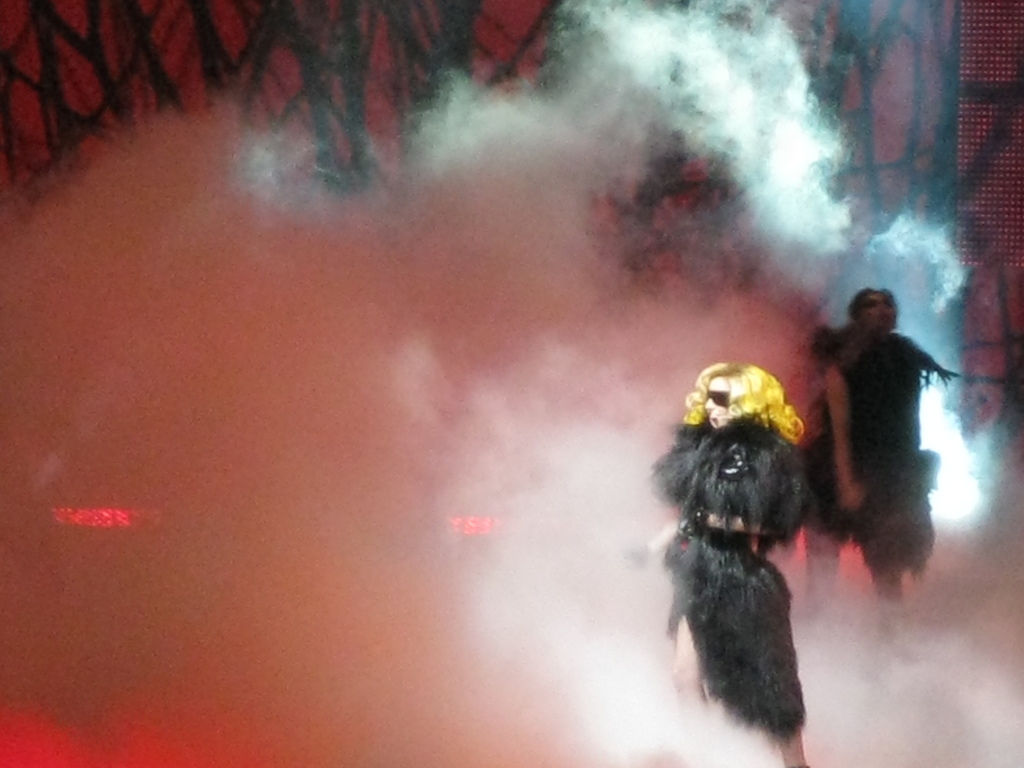 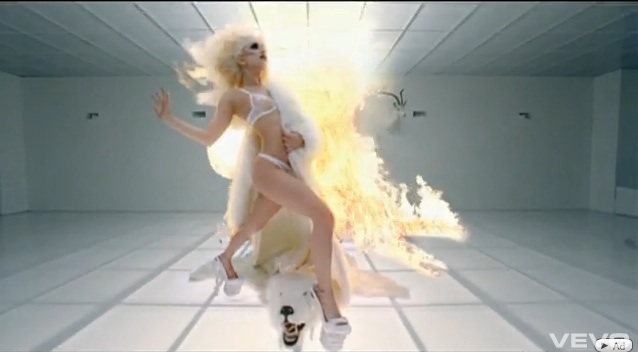 The fire scene from Bad Romance

See the similarity? If you don’t, have another drink and try again. Also, if any of you have spare tickets for the Saturday or Sunday show and need a date … holla! I’ll drop my plans to go-go again with you.

UPDATED TO ADD: Here’s another New York Times story that captures the show perfectly. It reminded me of my favorite video footage of the evening, which, if I’m remembering it correctly, showed a brunette vomiting neon green onto Lady Gaga’s straitjacket-ish white dress. My new ambition is to be someone who gets to vomit on Lady Gaga in a video! And check out Stacy’s post on Dale Bozzio and her Gaga style.