I love molten-metal looks in clothes and accessories and even manicures — which makes sense for a jewelry designer, right? — so last month, I was transfixed by this Instagram post from vintage store Baba Yaga. I had to have this platinum look!

I wore the St. John blouse last night for my birthday dinner and outing to Tina — the Tina Turner Musical on Broadway. I wasn’t the only one in the audience who decided glittering was the way to go for Tina Turner, by the way. 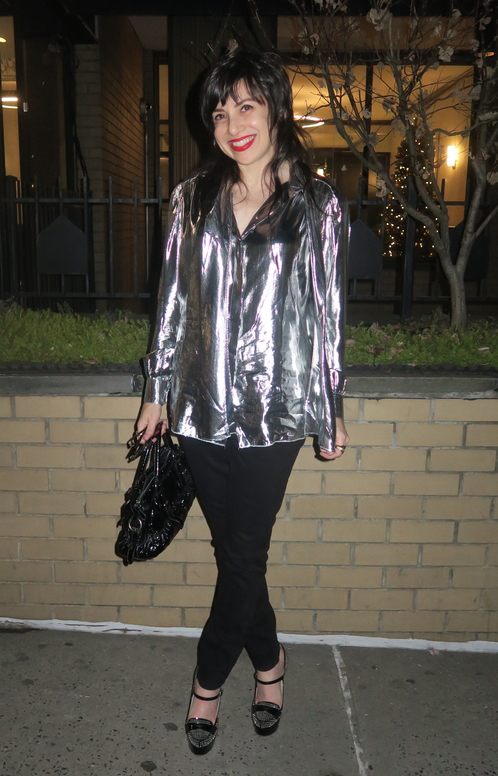 I considered wearing the platinum skirt yesterday but decided it was too much OUTFIT for making a stop in the Diamond District, walking five blocks to dinner, and then walking five blocks to the theater. Hopefully, I’ll wear the pieces together soon, because it definitely the moment for that look. Check out this dress by Batsheva!

@shop featuring this holiday dress on my site now🌪

Important note: Actress/singer/dancer Adrienne Warren knocks it out of the park as Tina Turner. Catch the show if you can! And thank you to the many people who sent me birthday greetings on Facebook and Instagram. It’s much appreciated, though I got overexcited when I thought that Gangsta Boo and I might have invented Airbnb.

Happy Birthday @wendybrandes !! We met in 2011, on Myspace! Haha now look, 9 years later…. shit. Fun Fact: Wendy used to let me use her parents condo as my place to stay [BEFORE AIR BNB] in New York City when I used to come visit, because I was scared of her cats, her parents lived in New Jersey and the place wasn't being used! Fun Fact part 2: We never met in person b4 giving me the key! Real recognize Real! I celebrate you, and love you sister.

Alas, Airbnb was founded in 2008, though major expansion didn’t come until 2011, so I’m still going to claim we were leaders in the field — without any venture capital money!