I hope you click the link in the first sentence because I put some effort into finding the right earnings story for you. A lot of the headlines on the McDonald’s stories out there just said earnings fell almost 23%. That’s true, but the fact that the earnings were better than expected is vital to the story. A company can have a huge loss but if it’s not as bad as expected, investors are thrilled. I’m committed to bringing you high-quality business-news links. 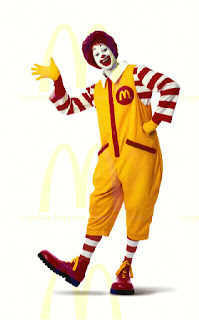 Anyway, I heard the earnings report on the radio and thought, “I really want a McDonald’s milkshake.” McDonald’s ads have never caused me to crave a McDonald’s milkshake. Only the earnings news. Maybe McDonald’s should report earnings more frequently. After a couple of hours of wanting the milkshake, I started wanting a Big Mac too. When I confessed this to the world’s most talented seamstress/vintage-clothing-fixer-upper, Jean of Ghost Tailor (“I remember you,” she said to my ornery Stephen Sprouse skirt), she told me there was a McDonald’s right around the corner.

I couldn’t resist, but I should have. While I was enjoying my Big Mac and chocolate milkshake in a clean and respectable-seeming McDonald’s, a not-so-respectable dude came up to me and tried to sell me pepper spray, which, he informed me, I could use if someone was bothering me. The only person who was bothering me was him, but seeing as I didn’t want to reward his behavior by making a purchase, I just grunted a negative response and tried to will the shake to go up the straw faster. I hate it when slow-moving drinks interfere with quick escapes. Damn you, dairy-ish product! While I was still fighting with the shake and wondering if a Taser-selling guy would come along so that I could use his product on the pepper-spray man, a dude sitting near me offered to sell me some gold chains. He sure was persistent. After I finally succeeded in giving him the brush-off, I heard him trying to buy an illegal substance from a third guy who said, “Nah, man, they have cameras all over here.” Luckily, I hit the end of the shake right at the moment and ran out of there before the questionable activities escalated. I don’t know what would have been next: sex-trafficking?

The moral of this story: Don’t listen to business news. Also, avoid the McDonald’s on 28th and 6th.

You might also like
Ossie's Back!
Throwback Thursday: A Little More Couture
Rihanna, Lady Gaga and Parents Who Fail at Parenting
Previous Post: « Word of the Day*
Next Post: Thursday Book Club: Author Randy Shilts »