If you’re anything like me, there was only one possible reaction to Senator Dianne Feinstein’s opening remarks at the inaugural ceremony last week: Get me the names of her doctor and hair stylist!

Dianne is 75, people. Seventy-five! And she looks great. Clearly, Supreme Court Chief Justice John Roberts and President Obama were as amazed as I was and that’s why they couldn’t quite get it together during the oath portion of the festivities. Roberts was busy thinking, “Note to self: follow Feinstein’s skin-care regimen….[suddenly speaks aloud] FAITHFULLY!”

Dianne has been on my mind since I saw director Gus Van Sant’s Oscar-nominated biopic Milk last month. The movie is about San Francisco Supervisor Harvey Milk, who was the first openly gay man to be elected a city official in the U.S. In 1978, Milk and San Francisco’s mayor, George Moscone, were assassinated by Dan White, who had resigned from the Board of Supervisors, only to change his mind and seek reinstatement. Moscone, with Milk’s encouragement, turned White down.

Feinstein, the president of the Board, succeeded Moscone as mayor. She announced the assassinations from the steps of City Hall; the actual news footage from that day is used in the movie. (That’s almost the only time Feinstein appears in the movie. Most of the work by the actress who portrayed her was cut, including a recreation of the announcement scene.) I recommend the movie: Sean Penn captures Milk perfectly and MrB, who knew Moscone, approves of Victor Garber’s portrayal of the mayor. However, to me, the film seemed muted compared to the couple of seconds of extremely emotional news footage shown at the beginning. You can see it starting here. Feinstein looks stunned and when she announces the assassinations, the crowd around her cries out in shock.

I also think the candlelit procession in memory of Milk and Moscone is more awe-inspiring in actuality than it was in the movie. You can see the procession starting at 3:13 here in this footage from The Times of Harvey Milk, a 1984 documentary narrated by Harvey Fierstein.

Watching the movie and the news clips inspired me to take another look at three books by the late journalist and author Randy Shilts. Shilts’s first book, which came out in 1982, was a biography of Harvey Milk called The Mayor of Castro Street. His second book, And the Band Played On, covered the first years of the AIDS epidemic. It was published in 1987 and later made into an HBO movie. Shilts’s last book, Conduct Unbecoming, a history of gays and lesbians in the U.S. military, came out in 1993. Shilts died of AIDS in 1994 at the age of 42.

The best of the three is And the Band Played On. I’ve read it cover-to-cover at least four times. Shilts’s investigative reporting reads like a thriller: as more and more people (men, mostly) are killed by peculiar illnesses in the prime of their lives, doctors around the globe battle politics and bigotry — even among their own ranks — as they try to identity the mystery bug. Interestingly, Shilts refused to learn the results of his own HIV test until he finished the book. According to a 1993 profile in the New York Times, he was concerned that knowing his status would influence his reporting. Even after he knew, he didn’t publicly reveal his HIV status until 1993, supposedly because he’d feared that he would be seen as an activist, rather than an objective reporter. Since then, journalists have been praised for writing about their personal struggles with, among other illnesses, liver cancer (the late Marjorie Williams of the Washington Post), prostate cancer (Dana Jennings of the New York Times), and brain cancer (the late Ivan Noble of the BBC). It fascinates me that Shilts, who wrote so eloquently about people who were forced by prejudice to stay in the closet about their sexuality, health or both, wound up doing the same for fear his professionalism would be challenged. I like to believe that attitudes have changed since Shilts’s death, even if my sweatshirts have not. 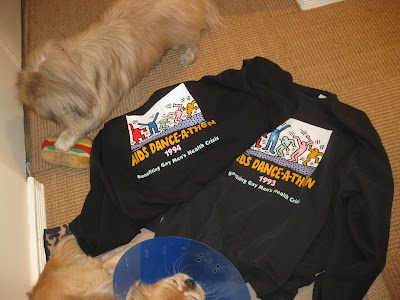 I still wear these AIDS Dance-a-Thon sweatshirts to the gym.
The dogs like them, too.

And the Band Played On is particularly memorable for Shilts’s outing of the late Gaetan Dugas, a French-Canadian flight attendant, as the “Patient Zero” of a Centers for Disease Control and Prevention study. The study, which helped scientists determine that the new virus was sexually transmitted, connected Dugas to more than a dozen early AIDS cases. Unfortunately, people with poor reading comprehension have come away from Shilts’s book with the notion that Dugas was single-penisedly responsible for spreading AIDS around the U.S. That is not true nor did Shilts claim that it was true, though he did vividly portray Dugas, who died in 1984 and wasn’t around to defend himself, as horribly selfish. In fact, the first AIDS patient Shilts described, in the first chapter of the book, is Grethe Rask, a lesbian doctor from Denmark who was working in Zaire. It’s pretty obvious she and Dugas never did the deed. In fact, as long ago as 1987, there was evidence that AIDS may have been in the U.S. in the 1960s.

The misinterpretation of Gaetan Dugas’s role in the spread of AIDS reminds me of the childhood game of Telephone, in which one kid whispers a message in another’s ear, then that kid whispers the message to the next kid, and so on down the line of kids till the last one announces the by-now totally garbled message to much amusement. (Nowadays, we call this game “the Internet.”)

Another example of the Telephone problem turns up in The Mayor of Castro Street in regards to Milk/Moscone-murderer Dan White’s “Twinkie defense.” Describing White’s trial, Shilts wrote, “Another psychiatrist talked about how Dan White’s habitual consumption of junk food — particularly Twinkies, potato chips, and Coca Cola — led to the killings, since the extreme variations in blood sugar levels exacerbated existing manic-depression. This soon became known as the Twinkie defense.” The jury was sufficiently convinced that White was operating under some kind of “diminished capacity” that it convicted him of two counts of voluntary manslaughter, rather than the malicious, premeditated murder that he obviously committed when he took a gun and ammunition to City Hall, sneaked in a window to avoid the metal detectors, shot the mayor, reloaded and walked down the hall to shoot Harvey Milk. The “Twinkie defense” was effective even though people to this day don’t seem sure exactly what it is. When people refer to it sarcastically, they’re usually under the impression that the defense argued that junk food alone was responsible for White’s diminished capacity. Shilts’s version of the defense’s theory was that excessive consumption of junk food worsened an existing mental problem. I’ve also read that neither of these interpretations is true, and that the psychiatrist was proposing that White’s switch to junk food from a previously healthy diet was a sign, but not a cause, of a mental problem. At this point, I would have to read the court transcripts myself to be convinced of the correct interpretation. I would track those down, but I’m too crazed from my excessive consumption of Cadbury Dairy Milk to make the effort. 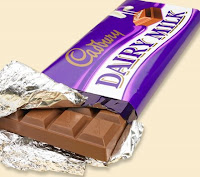 My drug of choice

By the way, The Mayor of Castro Street was published before Dan White was released from jail in 1984, after serving five years for the murder of two people, so Shilts didn’t have the pleasure of reporting that White killed himself in 1985.

Conduct Unbecoming is not as easy to read as Shilts’s other books. He chose to organize it chronologically, concentrating on the years 1954 to 1990. During those years, the more things changed, the more they stayed the same for gays in the armed forces. Sometimes things were better for them, sometimes they were worse, but for the entire duration, an astonishing amount of time and money was devoted to spying on people to determine whether or not they were gay and could be dishonorably discharged. If you like saying “Your tax dollars at work!” in a disgusted tone, this is the book for you, because practically each of the 752 pages inspires that reaction. Military officialdom was seriously obsessed with people’s sex lives in a pervy way. Usually I’m cool with perviness — some of my best friends are pervs — but voyeurs are annoying. They’re so damn lazy, letting everyone else do the work while they chill out with a pair of binoculars and a Diet Coke with lots of ice and a wedge of lemon. Okay, maybe I’m the one who enjoys a refreshing soda while doing pervy tasks, but the armed forces really did use binoculars, wiretapping, letter-reading, entrapment and anything else they could think of to learn the juicy details about soldier-y sex.

I’ll share two examples from the book that really define the oxymoron that is “military intelligence.” First, it was assumed that anyone who was married MUST be straight, which alone is enough to make me laugh my ass off. Allow me to introduce you to gay, married minister Ted Haggard. Plus, off the top of my head, I can think of five “straight” couples I know in which at least one of the parties is gay. Nevertheless, married people were usually safe from the military’s gay witch hunts, leading gays and lesbians to marry each other to save face while keeping their real lovahs on the side. So much for preserving the “sanctity of marriage” (my old friend Henry VIII laughs his fat ass off at the very phrase) by making homosexuality illegal. Second, Shilts does a terrific teardown of a study that grossly overestimated the rate of new AIDS infections among the heterosexual population. When the military decided it was going to screen everyone for the virus, it promised that it wouldn’t use a person’s viral status against him. But, if the patient had gotten the virus through homosexual activity, the armed forces WOULD prosecute him for having gay sex, meaning that patient would be booted from the army and lose his medical benefits. Naturally, almost everyone in the study lied, making the study’s application to heterosexuals worthless. In fact, so many dudes claimed they’d gotten the virus from heterosexual contact with a German prostitute that amused military doctors and nurses nicknamed the very busy, imaginary prostitute “Helga,” and the German health authorities got annoyed.

Despite its unwieldiness, Conduct Unbecoming is a very convincing argument against discriminating on the basis of sexuality. If you are a bigot or perv who doesn’t have time to read such a long book, I am willing to smack you in the head with my copy till I knock some sense into you. The book-smacking will be the faster option and I’ll enjoy it more, so drop me a line if you need my help.

You can check out a 1993 clip of Shilts talking to Charlie Rose about the book here.

Shilts was sassy, too. “HIV is certainly character-building. It’s made me see all of the shallow things we cling to, like ego and vanity,” Shilts told the New York Times in the 1993 profile. “Of course, I’d rather have a few more T-cells and a little less character.” Dang! I wish he were around to write about gay marriage now. Imagine the fun I’d have hitting people with that tome!

UPDATED OCT. 26, 2016, TO ADD: A new study has been published in Nature dealing with Gaetan Dugas, aka “Patient Zero.” I shared my thoughts here.