When this Dolce & Gabbana ad came out last year, I had the same thought that a lot of people had: “Oh, my! Is that very tan, very blonde lady fashion designer Donatella Versace?” 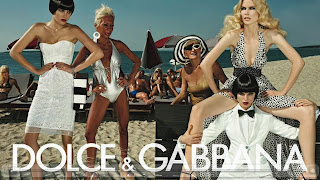 My next thought was, “It wouldn’t make much sense for Donatella to be in another designer’s ad. After all, I’m not going to pose for jewelry designer David Yurman, even if he begs me.” If I had been working for People.com (as I did way back in 1999) I would have called D&G immediately to find out what was going on, but y’all aren’t paying me enough to do extra research for you. Yeah, yeah. You keep saying the check’s in the mail. I’m sick of your lies.

Anyway, I thought of the Dolce ad again in December, everyone went nuts in a bad way over pictures of “Donatella” in a bikini. A Donatella who, to me, looked a lot like what I thought of as Dolce’s pseudo-Donatella.

I kept waiting for a correction about those December photos that never came … until now, it seems. JustJared is warning readers that both new photos and the December ones are of a pseudo-Donatella. Meanwhile, X17online updated a December post to say that Versace’s lawyers stated that X17’s pictures were of pseudo-Donatella. So for now, I’m going to allow myself to feel smug while I wait for someone with authority to clear up this mystery once and for all. That means I get to feel smug forever, because there IS no authority in the blogosphere — probably because no one feels s/he’s being paid enough to pick up the damn phone and confirm anything. Yeah, yeah. I’ll go wait by my mailbox for that check.

If you have any new information about the Donatellas, feel free to leave it in the comments. If you want to talk trash about the bodies of any Donatella, go elsewhere to do it unless you’re (a) screwing her and have a personal interest in the matter or (b) willing to share a bathing-suit picture of yourself on this blog to even the field. If (a) doesn’t apply and (b) isn’t happening, (c) let the woman enjoy her beach time in peace.

UPDATED TO ADD: After I posted this, this blog updated its information to reflect that its pictures probably were NOT of Donatella. It only took a couple of months!

You might also like
London, Day 3: In Mrs. Sting's Closet
Hot for Jeremy Scott, Sympathetic to Nicki Minaj
Marc by Marc Jacobs and My Yellow Rain Boots
« Better to Have Loved and Lost
Gratifying »