I still haven’t recovered from the Times of London’s chimichanga-flashing interview of date-rape-apologist Helen Mirren, but I did enjoy this fully-clothed interview the paper conducted with my almost-husband, Paul McCartney.

I do think Paul (and everyone else) should stop worrying about fools who still gripe about who broke up the Beatles. Many of us have left crap jobs. That’s all that he did. Plus his colleagues were sporting dirty-looking beards and holding bed-ins! Anyone with sense would be outta there.

Anyway, check out the article here. Also, you can check out the tape of Almost-Husband’s comment on John Lennon’s death. Unlike what I always read, “Drag, isn’t it,” was not his first comment. I find it all very forgivable because he’s obviously stunned.

McCartney’s frequently displayed thumbs-up pose and use of the word “veggie”? Now, those things are unforgivable. 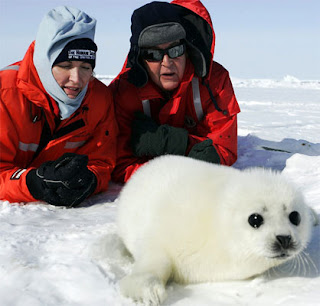 Paul and ex-wife, batshit Heather, harassed an innocent seal a few years ago.
After this picture was taken, the seal grabbed a club and beat the hell out of them.
In my dreams.
I just decided that I want “Drag, isn’t it?” engraved on my tombstone. Thumbs up for that idea!
You might also like
My Dogs Are Lazy
For Grammy Night: Six Degrees of Ringo Starr
My Almost-Husband and the Old House
« Giggity Giggity GigaPan
Three Textures, New Ring »