In a debate, a “straw man argument” is a way of misrepresenting (or oversimplifying) your opponent’s position in order to make that position easier to defeat. For instance, in an April article in Foreign Policy magazine, Paul D. Miller wrote that Donald Trump’s “America First” policy is a straw man because it offers “a stinging rebuke — possibly the definitive refutation — of a position no one holds.” Miller elaborated:

“Trump promised that his foreign policy would be ‘based upon American interests, and the shared interests of our allies,’ in contrast to the view that U.S. foreign policy should not be based on U.S. interests — a view that no candidate or elected official in either party, at any level of government, currently advocates.”

At a music festival, a “straw hat argument” is an impossible-to-win debate with an asshole who is standing in the front row. It first happened to me at Coachella in April. When I nicely asked the guy in front of me to take off his wide-brimmed straw hat before Guns N’ Roses came on — which was well after sunset — he freaked out. His straw hat argument was, “I’ve been waiting here since 7 in the morning!” When I asked him what that had to do with him wearing his hat after 9 p.m., he screamed, “WHAT AM I SUPPOSED TO DO, HOLD IT?!”  The hat stayed on his head and in the second row’s line of vision for the whole GNR show. You can see the damn thing in this video.

I figured that was a one-off experience, but it happened again when I went to the Global Citizen Festival in Central Park last month. There was a woman in the front row wearing a brightly colored wide-brimmed straw hat. No one had any complaints until late, when the headliner — Rihanna — was about to come on. Then the woman next to me in the second row tapped the hat woman on the shoulder and very, very politely asked if she would mind taking off her hat because it was blocking her view of the stage. The hat woman was outraged: “WHAT AM I SUPPOSED TO DO, HOLD IT?!” Then she turned to me and belligerently asked if I too thought her hat was blocking the view. I was like, “Well … yeah.” That apparently helped her decide to keep wearing the hat. Her hat makes dozens of appearances in the photos I took that day. 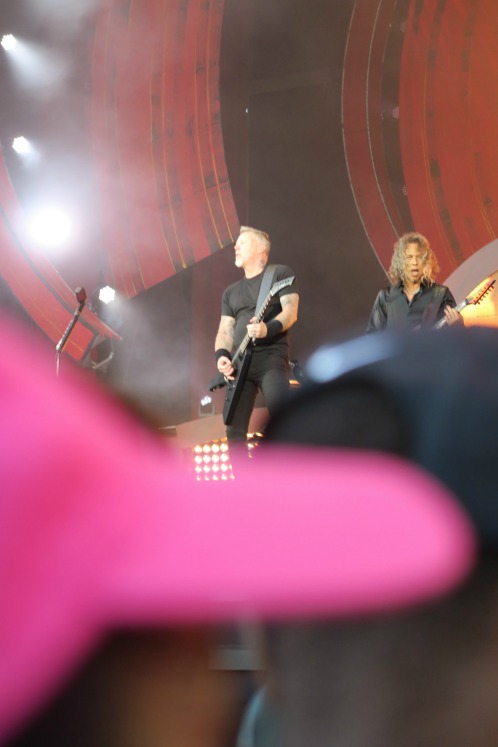 Is that Metallica playing behind that hat? Not sure.

I remembered those two people last weekend when MrB — the owner of numerous baseball caps — turned up at the Desert Trip festival without a hat to protect himself from the sun. We got him a straw hat that he wore during the day as we walked the festival grounds and rode the Ferris wheel. Then, as the sun went down and we waited for the Who to come on, I told MrB to take off his hat so he didn’t block the people behind him. That’s what nice people do! That said, I was like, “WHAT ARE WE SUPPOSED TO DO, HOLD IT?!” for a hot second, because it really is kind of inconvenient to deal with a big straw hat! Then I realized I could use the string attached to it to tie it to my purse. It could have been tied to a belt loop as well. 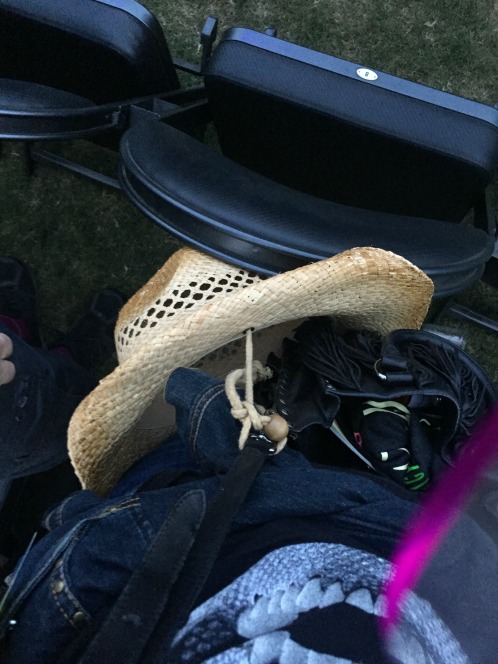 So that’s what y’all can do with your straw hats at shows! Now you know.

This weekend is the second one of Desert Trip (aka Oldchella) so Neil Young and Paul McCartney will be performing in a few hours. I hope Neil hasn’t gotten all jaded and that he will be as smiley as he was last weekend if Sir Paul brings him out on stage. I’m sure that McCartney will tell his story about Jimi Hendrix asking Eric Clapton to tune his guitar, because he tells it during his solo tours. Here’s another McCartney clip for you Beatles fans.

Too bad that Paul McCartney is among the weakest acts of Coachella, according to Pitchfork, which claimed that notoriously weak-voiced, newly named Nobel laureate Bob Dylan outperformed him. That is, unless Paul’s set was actually “Desert Trip’s best,” as the Wall Street Journal’s critic said. But wait! The Who had the best set of the weekend, according to the Hollywood Reporter, even though McCartney was “exhilarating.” Well! If you need proof that the best music is in the ear of the beholder, just read all the Oldchella reviews.

You might also like
My Almost-Husband Paul McCartney Is 70
My Best Dressed at the Emmys: Ummm ...
Music and Beauty
Previous Post: « Oldchella Day 3 and Bob Dylan the Nobel Winner
Next Post: Happy Adoptaversary, Edward »