It’s been a while since my last Book Club post. Last month’s visit to Warsaw and Krakow made me (temporarily) set aside my medieval queens in order to read two books about Polish Jews and the Holocaust: Sala’s Gift and The Lost.

I had read a lot about the Holocaust in the past in part because my family hails from various Eastern European countries, which they sometimes achieved without moving house. For instance, my grandfather’s cousin, Max, was born in Czernowitz, Austria-Hungary. After World War I, the city became part of Romania and was renamed Cernautzi, though the German-speaking inhabitants stuck with “Czernowitz.” Then, during World War II, the city was taken over by the Soviet Union and called Cernowitzy. Now it’s called Chernivtsi and located in Ukraine.

Max himself served in the Romanian army before being sent to a German-run slave camp in Ukraine during World War II. When the camp was liberated by the Soviets, he was drafted into the Soviet army. After the war, he sensibly decided, “To hell with this place! I’m moving to America!” But the U.S. wouldn’t let him in and the USSR wouldn’t let him out, so he smuggled himself out to Italy, made a pit stop in Crete and ultimately landed in Canada where he became a citizen. Eventually, he made it to New York. Now, at 94, Max is still a gorgeous international jet-setter, zipping between New York and Australia with his sex-ay gal pal Lola — whom he knew back when they were kids in Czernowitz, Cernautzi, Cernowitzy and/or Chernivtsi. Jebus! Look what you have to go through to win the heart of the girl next door. Also, I’m probably going to get in trouble for giving away his age. I swear he looks like he’s 84, y’all.

I’ve never forgotten a piece of chocolate halvah that Max gave me in the ’70s.
Did. Not. Like.

Anyway, my recent reading came about because World War II makes itself felt so vividly in both Warsaw and Krakow, and not only because Krakow is a short distance away from Auschwitz, the most notorious Nazi concentration camp. The war-damaged 16th century synagogues in Krakow’s old Jewish district of Kasimierz stand as a testament to a vanished population. (At the start of WWII, there were more than 60,000 Jews in Krakow. In 2005, there were 157.) But it was in Warsaw where the war felt most tangible to me. A number of people, including my gorgeous Polish friend Monika, had told me to concentrate on touring pretty, historic Krakow — that Warsaw was too new, too ugly, too Communist. The problem is that old Warsaw was systematically destroyed by the Germans in 1944. While some of the original architecture was recreated after the war, painstakingly copied from old pictures of the city, the medieval-looking buildings are really just decades old. 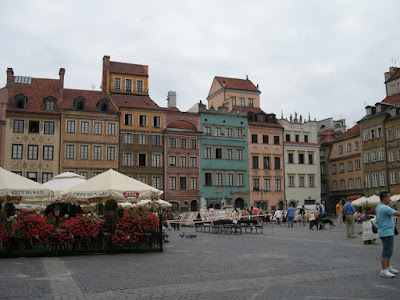 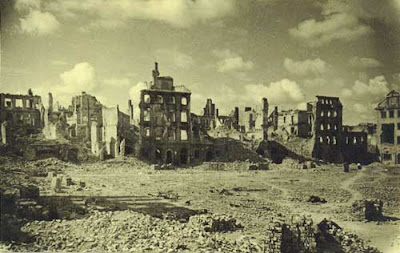 Knowing that all the “old” buildings were new — as well as seeing the ruins and empty spaces that the Communists couldn’t afford to do anything with and passing by the occasional bullet-pocked building facade — made me unable to forget the war for even a moment.

Warsaw’s destruction in 1944 was the direct result of Poland’s victimization during WWII. The Allied invasion of Normandy — D-Day — took place on June 6 of that year, with the objective of freeing Europe from Nazi occupation. Made hopeful by Allied progress, including the approach of the Soviet Union’s army, the poorly armed Polish resistance rose up against the German occupiers that August. (This “Warsaw Uprising” is not the same as the “Warsaw Ghetto Uprising,” which took place in 1943.) However, the Soviets deliberately halted a few miles outside the city and refused to provide any support. The resistance army lost to the Germans: more than 15,000 resistance fighters and 200,000 civilians were killed in Warsaw during the uprising. So many people died that bodies were just being buried where they fell, if they were buried at all. Then, after the fighting, the Germans evicted all remaining civilians and used explosives and fire to destroy the city, in accordance with Hitler’s decree that “Warsaw has to be pacified, that is, razed to the ground” and SS Chief Heinrich Himmler’s command that “No stone can remain standing.” The Germans were careful to identify and destroy monuments and historical buildings that were especially important to Polish culture. 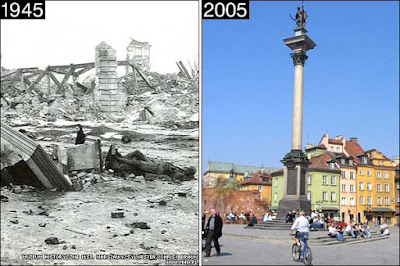 Warsaw, then and more recently.

So, why did the Soviets sit on their asses and let their enemies, the Germans, destroy Warsaw? Because the USSR wanted Poland for itself, and a successful, uppity Polish army would never politely turn over its country to a bunch of Communists. In fact, the Soviets wanted Poland so badly that in 1939, the USSR was acting all buddy-buddy with Germany and signing a non-aggression pact. Evil dictators Adolph Hitler (Germany) and Joseph Stalin (Soviet Union) basically said to each other, “Hey, you’re evil. I’m evil. We have a lot in common so we shouldn’t fight. Let’s just split up a big chunk of Europe between us.”

This cartoon by David Low shows Hitler and Stalin making nice over the corpse of Poland.

They agreed that each would get a piece of Poland. Germany would also get Lithuania, while Russia would take Estonia, Finland, Latvia and a bit of Romania. Obviously, no one asked the countries in question if this plan was cool with them. If someone had said to the Poles, “Hey, is this cool?”, they would have been like, “Um, no!”

As it turned out, there’s no honor among thieves. Hitler out-eviled Stalin by attacking the USSR in 1941, so Stalin decided Germany wasn’t so great after all and joined the U.S. and U.K. to fight the Nazis.

But becoming anti-Nazi didn’t improve Stalin’s personality. He was still evil and still wanted Poland for himself, and that’s why his army stood by and watched while the Germans — who hadn’t faced the fact that they were losing the war — took down the Polish resistance. After the Germans got rid of the independent Poles, and the Allies got rid of the Germans, the Communists were able to snatch up whatever was left of poor Poland.

So, as you see, Poland was treated craptastically by both sides. The Polish people suffered terribly. I’ve been begging Monika to write down the story of her grandmother’s remarkable escape from Warsaw with a 9-month-old and a two-year-old in tow, so I won’t tell it here, but trust me, it’s hair-raising. Also, if you’re ever in Warsaw, check out the stellar Warsaw Rising Museum, which gives you a sense of what it was like during those desperate times.

One thing you won’t get a sense of in Poland — not at the Warsaw Rising Museum or even Auschwitz — is the history of Polish anti-Semitism. Except at the Jewish history museums, anti-Semitism is treated as something that the Nazis brought with them. There’s an emphasis on Polish victimhood and bravery. Much is made of the Righteous, who range from people who did great things, like risking their lives to hide Jews, to people who maybe passed along a letter for a Jew. (At Auschwitz, MrB studied a display about the Righteous and remarked, “You didn’t have to do much to get your name up here.”) The big local hero is Oskar Schindler, the subject of the movie Schindler’s List. Schindler was a rich Nazi Party member who saved many Jews from the gas chambers by employing them in his Polish factories. (One of the factories was supposed to be producing ammunition for the Germans — Schindler made sure none of the ammunition worked.) Schindler spent his entire fortune on bribes he had to pay to save Jews and on caring for the Jews he saved. Poland has every reason to be proud of Schindler — except he wasn’t Polish. His actions took place in Poland, but Schindler was an ethnic German, born in Austria-Hungary, like my grandfather’s cousin Max. Even now, after the borders were redrawn, Schindler’s birthplace is part of the Czech Republic, not Poland.

Oskar Schindler was not Polish.

It is true beyond a doubt that anti-Semitism in Poland did NOT result solely from the German occupation. Here are just three examples, from before, during and after WWII.

Obviously not all Poles, or even the majority of Poles, were anti-Semitic, but there was a level of anti-Semitism tolerated in the culture. I found the denial of this to be so pervasive that I was grateful when the Auschwitz tour guide acknowledged that 90% of the people sent to the gas chambers there were Jewish, even though she spent 90% of her time talking about the gentile Polish victims. She was very careful: After each of the many stories she told about Poles in Auschwitz, she would say, “But of course 90% of the victims were Jews.” Believe it or not, that spin is a huge improvement over what the Communists used to say. My gorgeous Polish friend Monika, who grew up under Communism, told me that in school she was taught that the Auschwitz victims were ALL Poles. This apparently was supposed to be a nice, brotherly sort of thing, to be interpreted as “We are all comrades and all Poles. Religion doesn’t matter.” But that’s completely inaccurate. Auschwitz’s victims weren’t all Poles. Victims were being transported to Auschwitz from all over Europe — from as far away as Norway and Greece. Thousands of Hungarian Jews were murdered in 1944 alone. 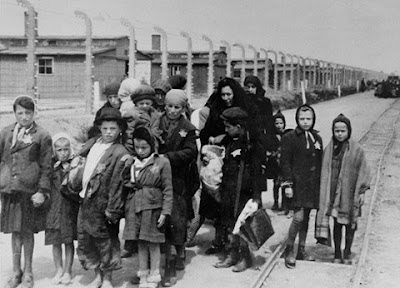 A famous photo of Hungarian Jewish children walking to the gas chambers.

All of this — the feeling that WWII was so close, the awareness of the suffering of the Poles, the denial of anti-Semitism — is what led me to pick up the two books I mentioned at the start of this post. It’s a long post, isn’t it? That’s why I’m going to be a big tease and save my thoughts about those and other books for next Thursday. What?! Stop complaining. You should be happy I’m not making you read any more today. Go browse the Net-a-Porter sale or something. Let me know if that Miu Miu top I like is still there.

UPDATED TO ADD: Thanks to gorgeous blogger CDP for bringing up Irena Sendler, who truly deserves to be called Righteous for smuggling 2,500 Jewish children out of the Warsaw Ghetto.