The dogs are going to the groomer today. Thank God, because they smell like Limburger cheese. 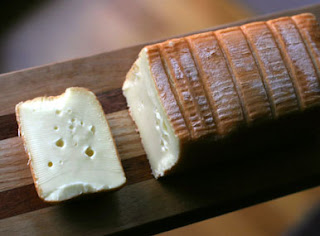 The smell of unwashed Pekingese.

Gigi always gets the same ‘do, which suits her perfectly straight hair and minimizes her large (for a Peke) schnozz. 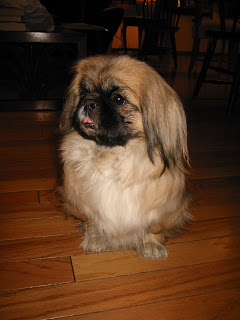 Gigi, the Barbra Streisand of Pekes*

But I’m not sure what to do with Henry. When he’s got long hair, his natural Henry VIII-like red color shows nicely. 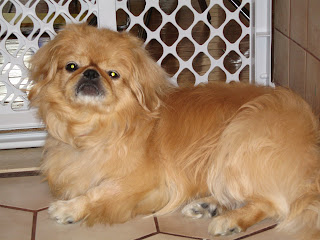 “Off with your head!”

When he has short hair, he looks blonder but very cute, like a teddy bear. 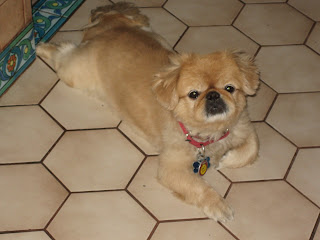 *We have determined she is mostly Tibetan spaniel, but we let her keep passing for a Peke. I can’t bring myself to tell her about her heritage when I haven’t even told her she’s adopted!

UPDATED TO ADD: It is quite chilly out today so I decided that this was not the right time for Henry to shed his winter coat. He just got a bath and a trim instead of a buzz cut. In case he gets invited to any special events, I picked out some “black tie” ear ornaments for him. 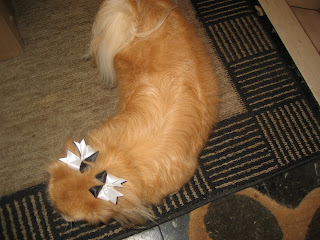 Why do I do these things to him? Because I can. 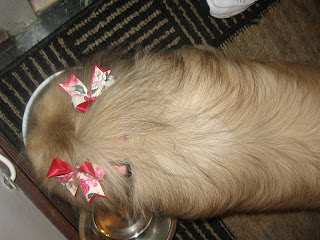 Someone once described Henry as “the brown dog.” Ooh! I was so angry! Henry is clearly Tudor red and if you say otherwise, I will have you sent to the Tower.

UPDATED AGAIN TO ADD: GeorgeB is sending me photos of Molly, my parents’ rescued Peke. Here she is wearing a wizard’s hat. 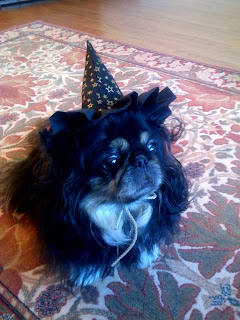