In November, I went with gorgeous blogger Bobble-Bee to see a documentary on Yves Saint Laurent. As I noted at the time, there were more black models on the runway in the old footage than we see nowadays.

One of YSL’s favorite models was Katoucha Niane, called “the Black Princess” or “the Ebony Princess.” Last week, I was saddened to read that her body was pulled out of the River Seine, several weeks after she went missing. It seems to be an accidental death; she apparently drowned while returning to the houseboat where she lived. She was 47 and is survived by three children. 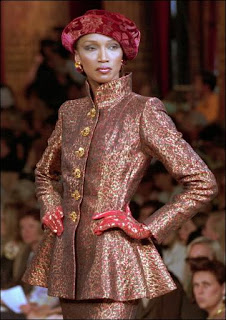 Katoucha in YSL
From katoucha-niane.com

Katoucha was born in Guinea in Africa. She moved to Paris in the early ’80s and worked for Thierry Mugler and Christian Lacroix as well as Saint Laurent. After she retired from modeling in 1994, she became an outspoken critic of female genital mutilation, which she endured at age 9. Last year, she published her biography in French. 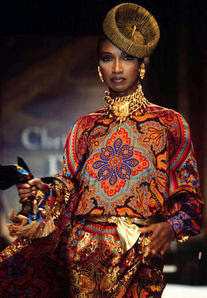 Katoucha in Dior
From katoucha-niane.com

Here are links to obituaries that give a good overview of her often-troubled life:

The Times of London also ran a story about her disappearance before the body was found. It’s here. And, if you speak French, or even if you don’t, you might appreciate this interview she did about her cause and her book.

Black models first made an impact on the French fashion world in 1973, when a group of American designers, including Stephen Burrows, used them in a influential fashion exhibition staged at Versailles. A few years later, the Guardian says, there were so many black models working in France that WWD said “the runways of Paris were beginning to look like 125th street in Harlem.” Not a problem now, eh? If one were to confuse the runways with another location, it would probably be the former Soviet Union.

I have some more posts coming up about favorite “vintage” models. And speaking of Bobble-Bee, she just did a great post on three fabulous models from way back in the day here.

UPDATED TO ADD: It is NOT open season on models who speak out against female genital mutilation. Former model Waris Dirie, who disappeared for three days in Brussels where she was supposed to be attending conferences, was found by police. First she said she had been confused and was wandering around the city because she had no money and couldn’t speak the language. She has since changed her story to say that a taxi driver kidnapped and tried to assault her. Here’s a description of the incident that set off the whole chain of events:

Dirie’s manager, Walter Lutschinger, said she had been involved in an altercation in a hotel reception area after a taxi driver took her to the wrong branch of the Sofitel hotel chain. The police were called and drove Dirie around Brussels looking for the correct hotel because she had apparently forgotten where she was staying.

At one hotel, while staff and police were checking for her name on a computer, [Jean-Marc] Meilleur [spokesman for the Brussels prosecutor’s office] said Dirie stepped out saying she planned to buy cigarettes from an all-night kiosk, but instead climbed into a taxi and drove away. (Source)

When was the last time the police came because you tried to check into the wrong hotel, then wound up driving you around the city scouting other hotels? What? Never? Me neither. I have no idea what’s going on here and I’m not going to rush to judgment. On the other hand, I can’t seem to get Amy Winehouse’s “Rehab” out of my head.