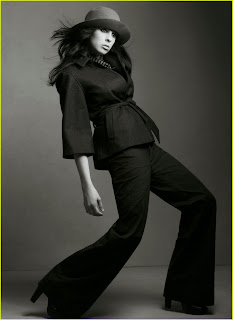 Penelope had a distinguished family. Her mother, Marietta Peabody Tree, was the first woman delegate to the United Nations. Her father, Ronald, was a member of Parliament and a grandson of U.S. retail king Marshall Field. Her older half-sister, Frances FitzGerald, is a Pulitzer-Prize winning journalist and author. Penelope herself was discovered at the age of 13 by the great photographer Diane Arbus, but Ronald Tree threatened to sue if those pictures were ever used, so Penelope didn’t start her modeling career till two years later.

Penelope wasn’t a stereotypical beauty but her haunting visage was perfect for the ’60s. She once shaved her eyebrows “because she wanted ‘to look more like a Martian than I already did.’ “ That story brings to mind another otherwordly face –’90s model Kristin McMenamy, whose career took off only after she shaved her eyebrows.