I love this scene from The Sopranos. Tony and his murderous mother Livia are fighting about her future, including the dispensation of her good jewelry.

My Livia Poison Ring wasn’t inspired by Livia Soprano, though I’m sure she would have found it useful. 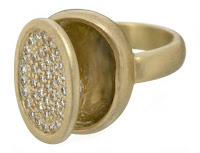 Instead, the ring was named after the Roman Empress Livia Drusilla, who was falsely rumored to have killed her husband Augustus, the first Roman emperor, by poisoning his figs while they were still on the tree. Supposedly, she did this to enable Tiberius, her son by her first husband, to become emperor. However, Augustus died at age 76 — truly ancient in ancient times and not so young now either. He and Livia had been married for 50 years. No one with an ounce of sense believes this intelligent and influential woman would suddenly decide to kill an old man with an elaborate tainted fruit scheme after missing half a century of opportunity. The fig story is just another example of a powerful woman being maligned by threatened males. Humph. 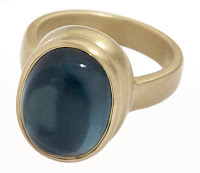 I didn’t name my ring after Livia with the intention of perpetuating the poison myth. I’m sorry, Livia! I did the first Livia ring in diamonds without a namesake queen in mind. The border of gold around the diamond pave made me think of Roman jewelry, in which cabochon stones were bezel-set. So, I named the ring after the greatest Roman lady I could think of. Then I did a few versions of the ring with cabochons to emphasize the Roman look.

Livia Poison Ring in 18K yellow gold and moonstone
© Wendy Brandes 2007-2008
Photo by John Muggenborg, whom I will certainly pay soon!
Years after her death, Livia was deified by her grandson, Emperor Claudius. I, Claudius by Robert Graves is my favorite historical novel even though it portrays Livia as a monster who poisons nearly everyone she meets.

UPDATED TO ADD: Gold prices have surpassed $900 an ounce. Can you believe that at the beginning of this decade, gold traded below $300 an ounce? I have to raise all my prices.

You might also like
With Age Comes Wisdom ... and IDGAF Style
Wendy Brandes Jewelry Goes International With Harper's Bazaar
Forever 21 and Topshop Are Amusing
Previous Post: « Life Is Full of Disappointments
Next Post: Boob Belt! »