I love to redesign old jewelry for customers and the mother of all redesign opportunities was literally handed to me in March. My gorgeous mother, BarbaraB, had to take off her engagement ring ahead of a minor medical procedure, only to find that it couldn’t be budged. The ring had to be cut off. 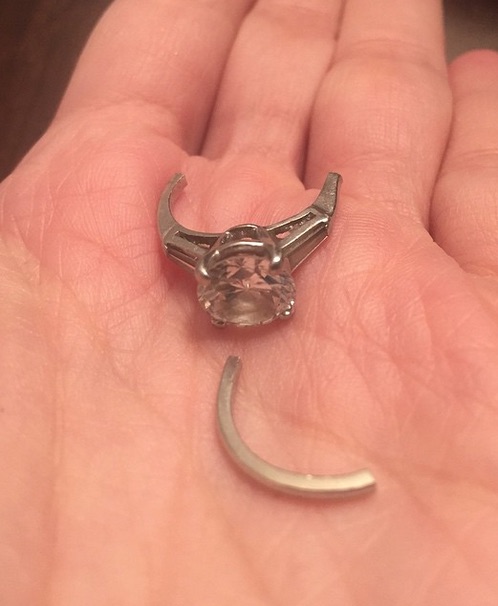 BarbaraB asked me if I could fix her ring, and I said I could do better than that. Why not get a whole new look? She said I could create anything I wanted, as long as it was ready for my parents’ 50th anniversary in December. At first, I was excited to do a design that I’d had in my head for a while, but then I decided a 50th anniversary demanded something even more glorious. I mean, think about it! Fifty years! That’s very special. 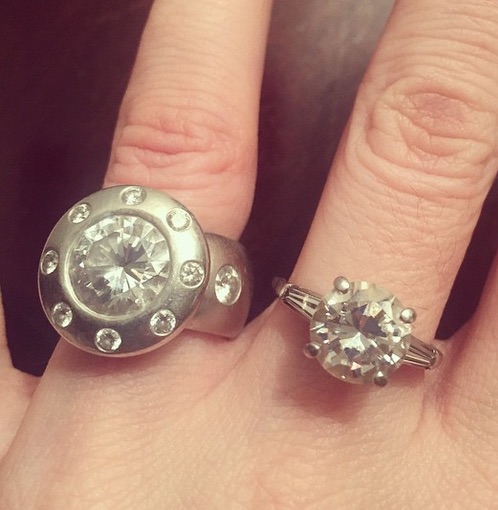 After my father, GeorgeB, approved the addition of more diamonds, I got to work on the platinum body of the ring. The undulating shape of the ring’s “head” was inspired by a ballerina setting. Ballerina settings usually have a center stone surrounded by baguettes that fan out like a dancer’s tutu. Sometimes the baguettes are set in a wavy pattern. I wanted the waviness without the baguettes. 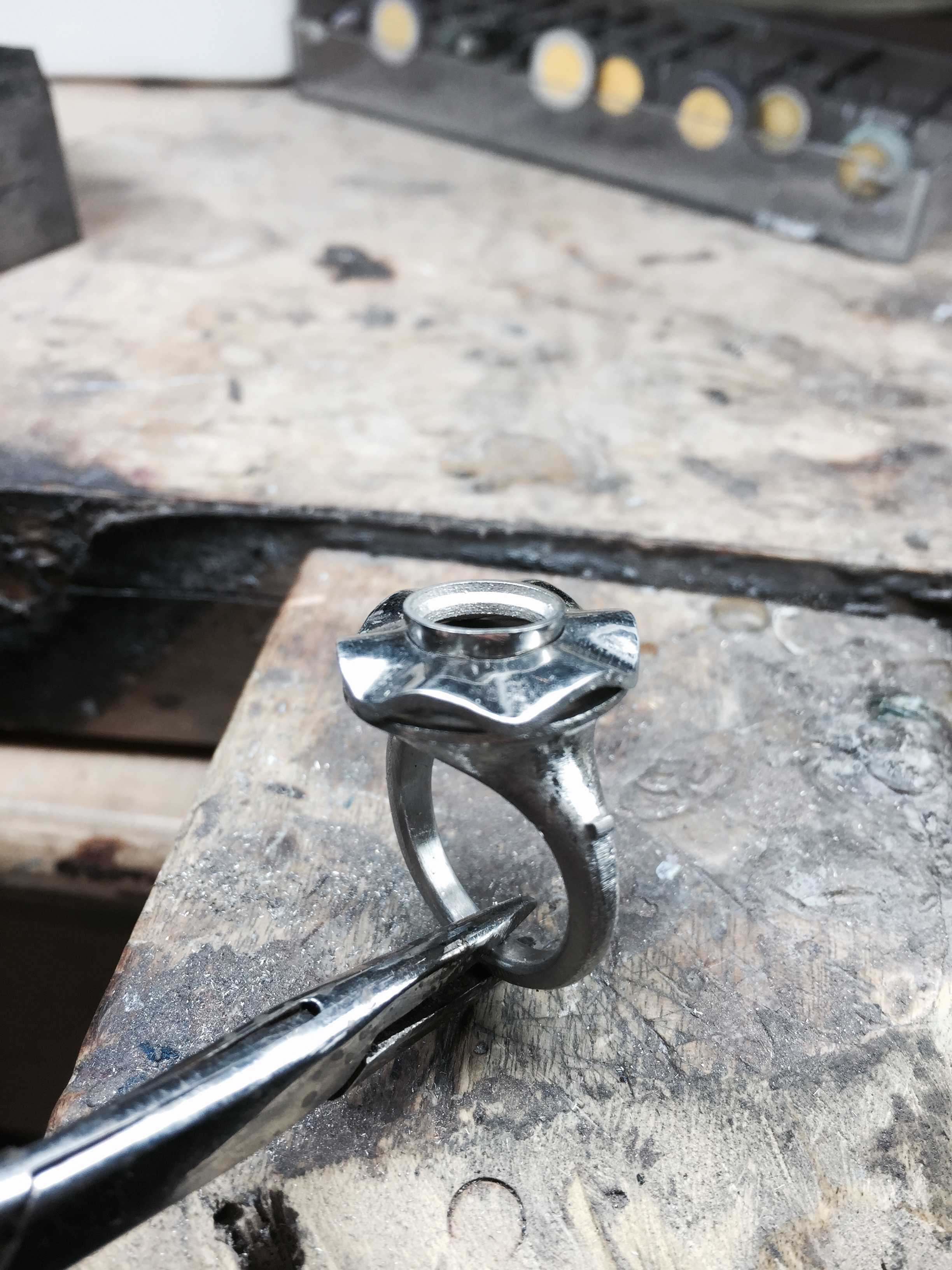 A work in progress.

I happen to love baguettes, but BarbaraB’s original ring included two tapered diamond baguettes. If I surrounded those with more baguettes, her original stones wouldn’t stand out. That’s why I used round diamonds to cover the head of the ring instead. To be exact, 199 round diamonds. 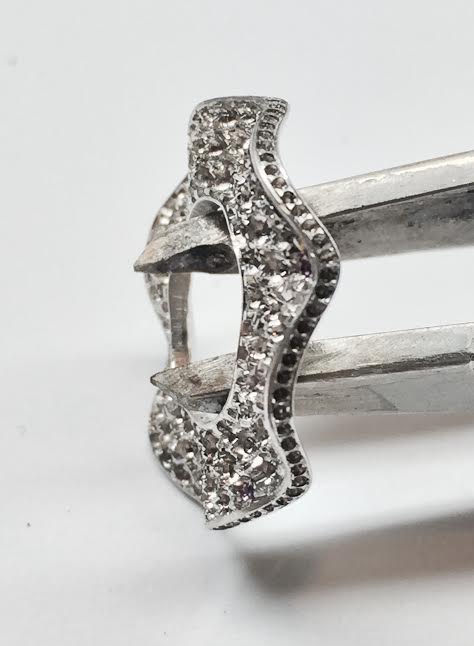 Half-finished setting. Around the edges, holes have been drilled for the gems.

When I finished the ring this summer, I asked GeorgeB, “When do you want to give it to her?” He said, “After you hand it to me.” I thought he might wait till her birthday or the actual anniversary, but he was ready to go! The opportunity arose this week, during a family visit.  GeorgeB decided he’d present the ring when we went to dinner at at Cibo in Glencoe, Ill. The day before, I tried to slip GeorgeB the ring a couple of times, but he kept putting it in his pocket, and I was worried he would lose it so I took it back.

When we were actually at dinner last night, I tried to discreetly pass the ring to GeorgeB under the table, but eagle-eyed BarbaraB said, “George, I can read you like a book and I know what you’re doing. You’re going to give me my ring.” She said she had seen both the handover and the little smirk he always has when he’s trying to do something surprising. Well, after 50 years, you’re bound to know a surprise smirk when you see one.  We all yelled at GeorgeB to ask BarbaraB to marry him again (he did and I think she said yes) and then I got this great reaction shot of BarbaraB and my gorgeous sister, Terri Berry, after BarbaraB put the ring on. 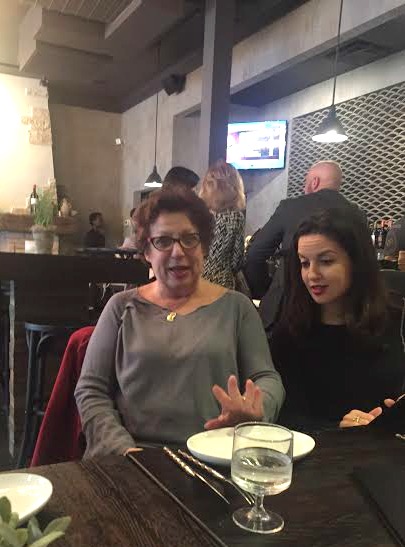 Here are the official ring photos by Ed Parrinello of SquareMoose. This is the Jewel of the Month for October! 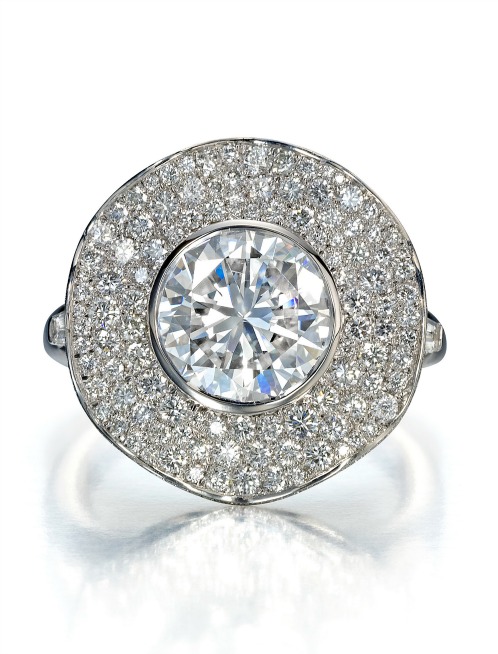 The baguettes are on the ring’s sides. You can see one to the right of the ring head in this photo … 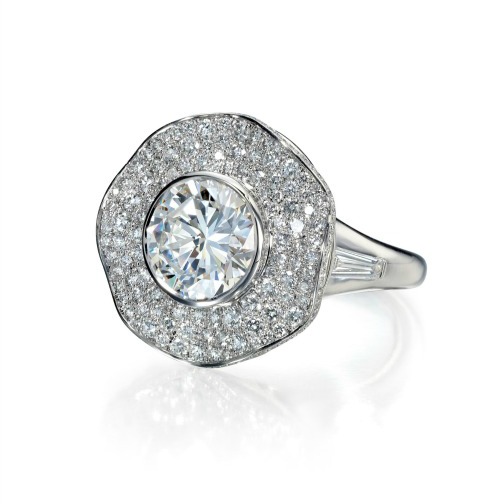 And here is a clear view of the side, showing one baguette as well as the many small, round diamonds set into the edge of the ring head. 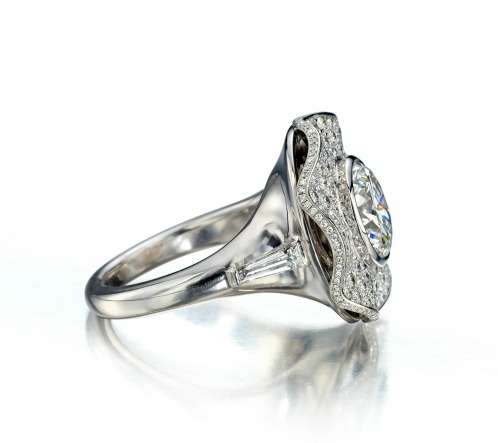 A lot of my designs include little surprises — like hidden diamonds or secret compartments — and yes, I do smirk just like GeorgeB whenever I dream up a surprise element. This time, I made the number “50” in 18K rose gold and tucked it inside BarbaraB’s ring. 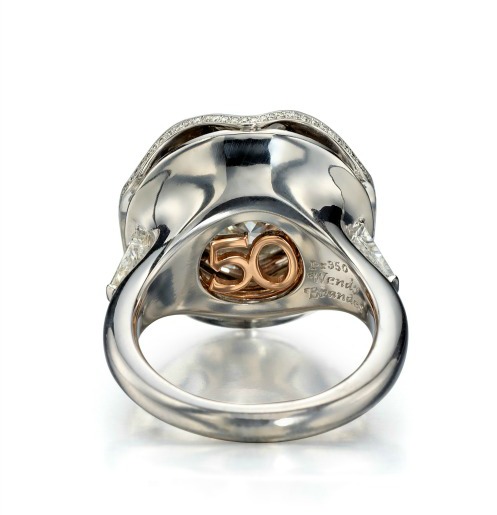 Here’s how it looks on. 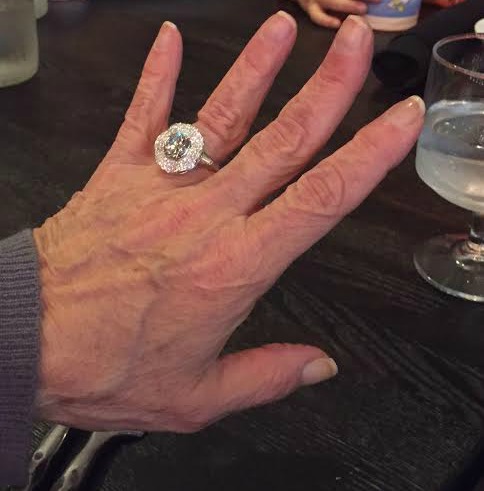 If you like this ring, you can have it. Not BarbaraB’s personal ring, of course! But the style will be available as a semi-mount, which is a ring setting that doesn’t include the center stone. You get to pick your own center stone — which could be a diamond or any other gem — and I’ll place it into the ring for you.  (I previously described the process of selecting a center stone here.) You also get to choose if you want special numbers or letters hidden in the ring, or if you want to go without. Send inquires to info at wendybrandes dot com, but please note that this style is not for people trying to stick to a tight budget … unless you’re my mom.

You might also like
Oscars Memory: Red Carpet With George Clooney
Jewel of the Month: Earring Homage to Eminem and MMLP2
Nu Shooz
Previous Post: « Musical Interlude: Madonna Part II and the Hole-y Spirit
Next Post: The Week in Review »