MrB received his honorary Doctor of Laws degree from Columbia University at yesterday’s commencement ceremony for the class of 2013. He perfected his royal wave in time for the occasion. 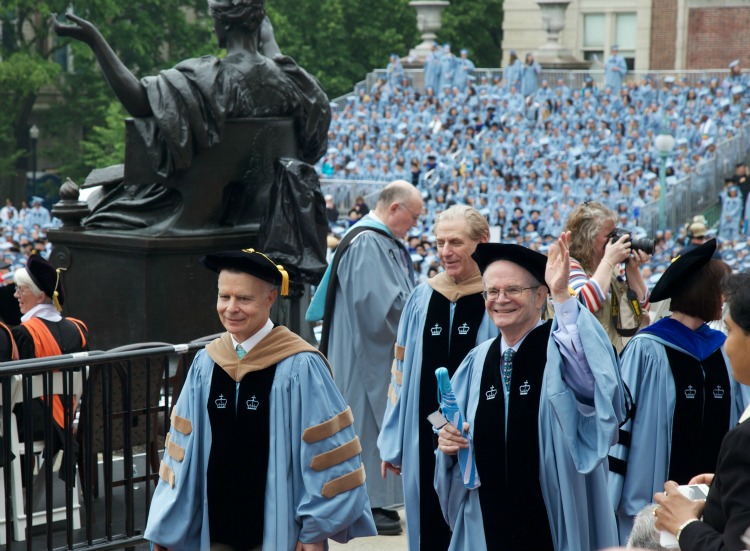 The procession on the way in. Photo by George Brandes. Click to see a little video.

My parents and youngest stepdaughter attended the commencement with me. Before we left my apartment for the Columbia campus, my four-year-old nephew was FaceTiming with my parents, as he is wont to do. (Apple gets ’em while they’re young.) They told him, “Uncle Paul is going to be a doctor!” and my nephew immediately asked, “Will he still live with Aunt Wendy?” I’m not sure what his thought process was, but I found it very amusing.

It also reminded me that two of MrB’s fellow honorees, Herbert and Florence Irving — the ones who will be celebrating their 72nd wedding anniversary this year –were joking about doctors at Tuesday night’s celebratory dinner. Herbert said that Florence’s mother had wanted her daughter to marry a rich Jewish doctor. Herbert declared, “Now she has!” Of course, because Florence also received an honorary doctorate, Herbert is married to a rich Jewish doctor too. Somewhere, Florence’s mother is kvelling. 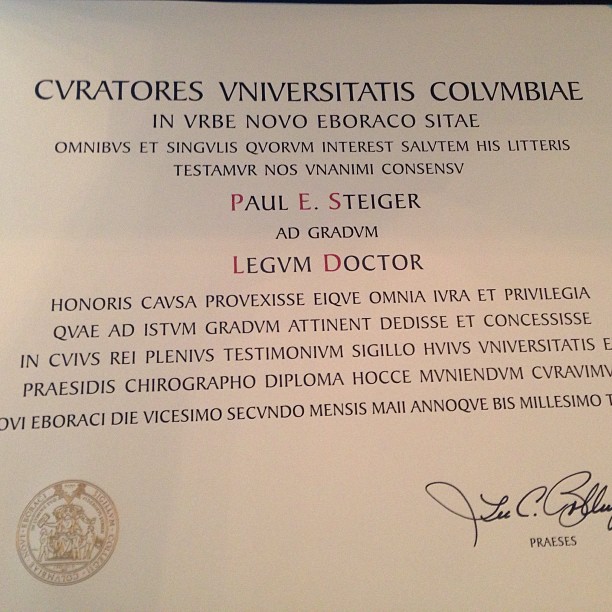 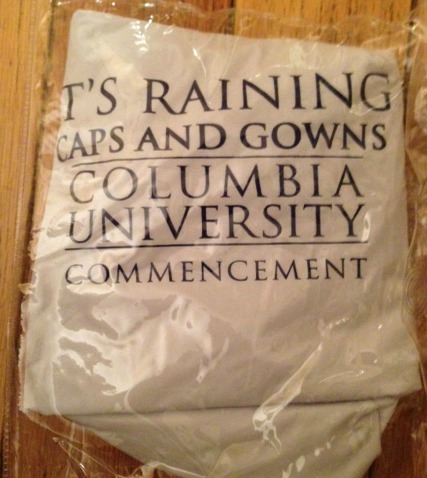 … but the rain held off and the sky brightened just enough to call for sunglasses. 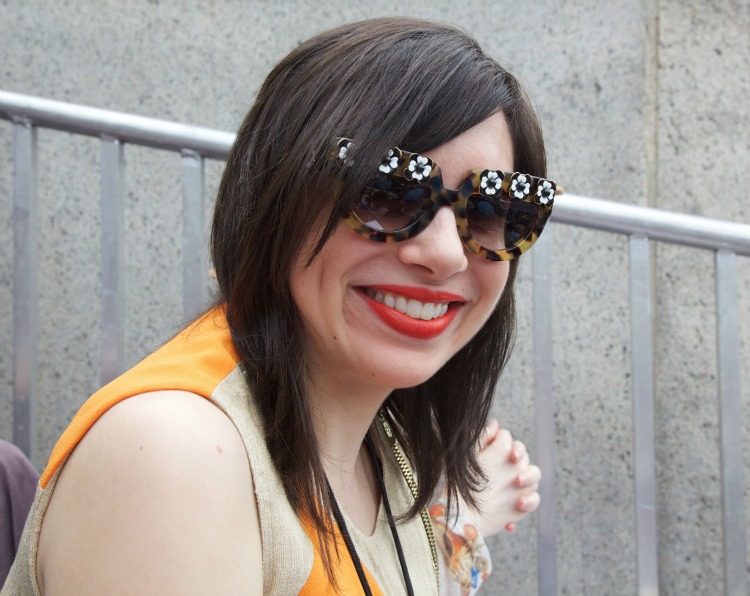 GeorgeB was amused by my silly shades. Photo by George Brandes.

It was exciting to hear Columbia president Lee Bollinger talk about MrB’s achievements. 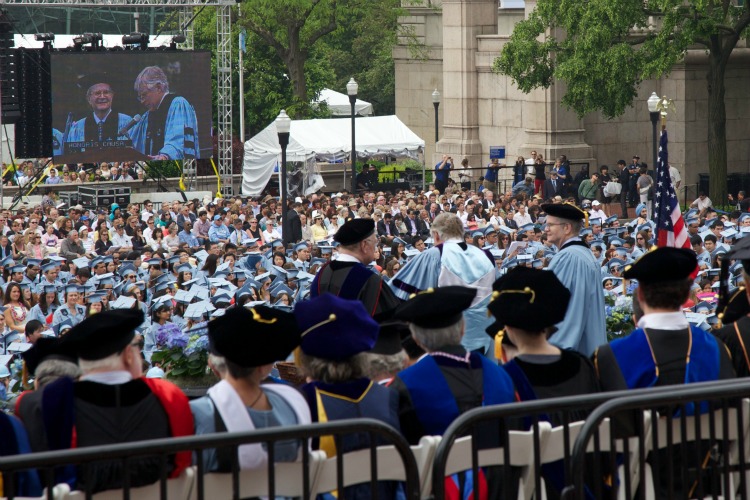 MrB is standing slightly to the right of center. You can also see him on the big screen in the upper left, listening as Columbia president Lee Bollinger speaks. Photo by George Brandes.

Those include 16 years as managing editor of the Wall Street Journal. During that time, the Journal won 16 Pulitzer prizes. Then, in 2007, MrB became the founding editor of ProPublica, a nonprofit investigative news team, which has won two Pulitzer Prizes, including the first Pulitzer Prize ever awarded to an online news organization. The Journalism School students gave him a big cheer. 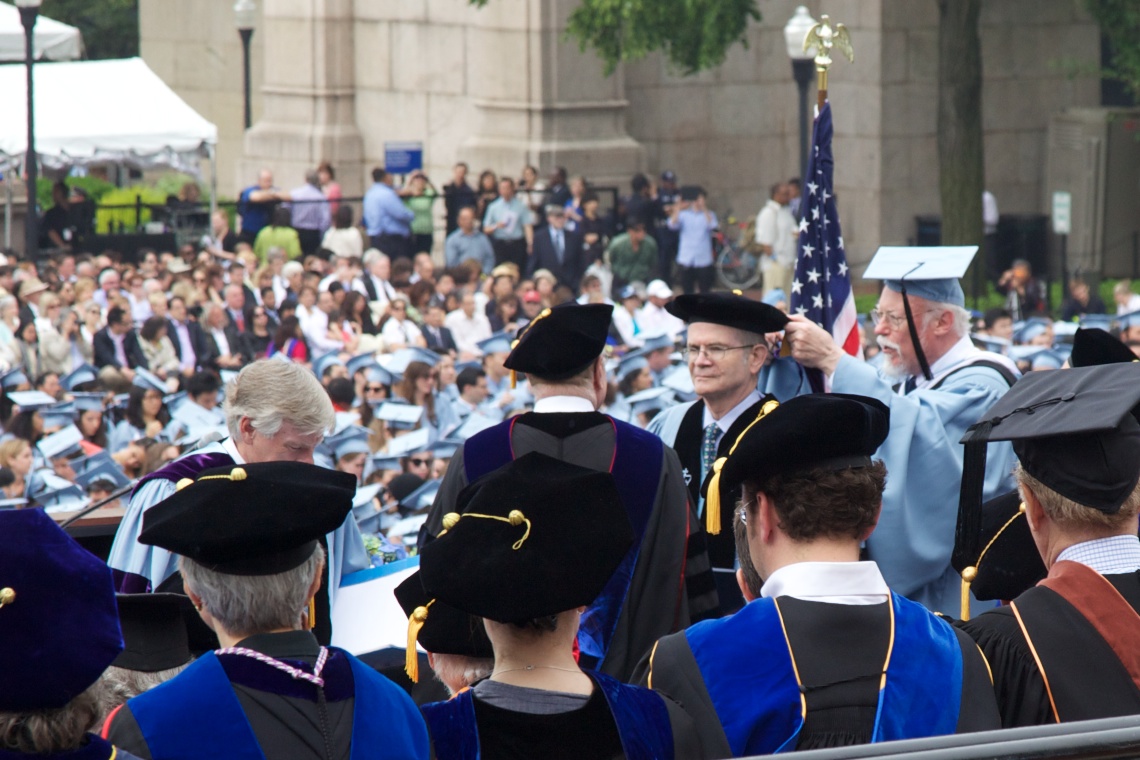 … and he kept his hat as well. I look forward to wearing that during New York Fashion Week in September.

I enjoyed President Bollinger’s commencement address. I was even inspired to take a note when he said, “Being at a university means never saying ‘Well, that’s just what I believe,’ as if that’s sufficient to end a discussion.” That made me think of Twitter, where people seem to think that the fact that they have opinions means their opinions are facts. Then all of the deans introduced their separate schools in humorous ways and asked President Bollinger to confer degrees on the students en masse. (Most of the students receive their actual diplomas on the schools’ individual Class Days. At dinner, President Bollinger noted that he had shaken thousands of hands and that students nowadays have very firm handshakes. Workers’ comp!) Ronnie Myers, the interim dean of the College of Dental Medicine, might have out-punned the others by referring to “roots,” “extracting” and “wisdom,” as well as the graduates’ excellent oral hygiene.

I don’t remember the deans being so highlarious during my graduation, but there was an awesome protest moment. The facade of Columbia’s Butler Library is inscribed with the names of great male thinkers. The ones on the front of the building are Homer, Herodotus, Sophocles, Plato, Aristotle, Demosthenes, Cicero, and Vergil. During my commencement, Laura Hotchkiss Brown — without permission — unfurled an enormous banner, adding the names of seven great female authors: Sappho, Marie de France, Christine de Pizan, Sor Juana Ines de la Cruz, Bronte, Dickinson, and Woolf.

As the New York Times later reported, the banner was removed by security, but “Ms. Brown later gained the support of university officials for the project …” and the banner was reinstalled as part of an exhibition and lecture series in September 1989. Good to see a university living up to its ideals of continued discussion!

Oh, and while MrB is now a doctor, I am a firefighter. During the cocktail hour before dinner on Tuesday, I spotted a floral arrangement starting to smolder due to a too-close votive candle. I patted the tiny fire out, and stood by the flowers giving them the side-eye for a while lest they flare up again. Always alert!

You might also like
What Wendy Wore: Head-to-Toe Zang Toi
WendyB Does Interviews
Stacy Lomman Wardrobe Therapy: Outfits #6 and #7
Previous Post: « It’s “Jif,” Bitch!
Next Post: DrB, Jim Morrison and the Rest of the Week in Review »