I enjoyed Isabel Marant’s interview with Telegraph Fashion last month. The French designer, whose wedge sneakers kickstarted the fashion sneaker trend last year, let her many imitators have it:

“Everybody who has the wrong one looks quite bitchy, very vulgar, when mine are not at all.”

I’m not 100% sure what it means to look “quite bitchy,” but I love the way she let her own inner bitch out. 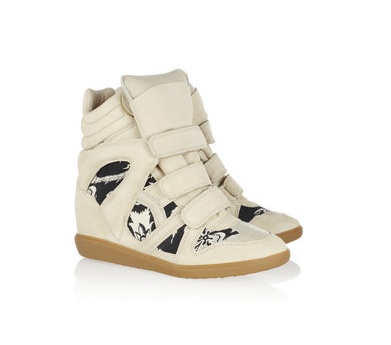 Some people responded online by pointing out that Marant didn’t invent wedge sneakers. Of course she didn’t! They’ve been around for decades. But it was Marant’s particular interpretation of the style, seen on the likes of Beyonce and Alicia Keys, that breathed new life into the concept at this particular point in time. Other folks complained that her sneakers were too expensive. I guess Marant is like the honey badger. She don’t care!

Shortly after that, Stephen Burrows — a groundbreaking African-American designer whose ’70s work is iconic  — spoke his mind to WWD, while he was preparing for a museum retrospective of his work. About celebrity designers, he said:

“They come up and just die. There are all these celebrity lines and in 200 days they’re gone. Meanwhile, someone else who does design can’t get going. The word ‘designer’ is so loosely used today.“

I appreciated his frankness, as well as his awareness of the challenges faced by new, non-celebrity designers. I thought, “I would like to let loose and say some of the shit that I’ve been thinking too.” Then the gorgeous Melina Bee came along and asked for an interview, so I told her what’s been bugging me of late. I also gave her a beauty tip and two lipstick recommendations. I’m bitchy AND helpful.