The Fader has a good interview with hot new rapper Trinidad James, aka Trinidad Jame$. James was signed to major label Def Jam due to the success of his independently produced video for “All Gold Everything,” aka the reason I randomly say “Woo!” when I’m hot and sweaty. (The video is NSFW and REALLY not safe for delicate flowers who clutch their pearls when they hear bad language and drug references.)

In the interview, it sounds like Trinidad (born Nicholas Williams) is pretty grounded and that the hype isn’t going to his head. Lots of people talk that talk without walking the walk, of course, but he seems quite sincere.

I also like what he said about doing a follow-up to his big hit:

“You can’t do another ‘All Gold Everything.’ It’s not like a T-shirt where you make a hard template and then you just keep making colors.”

THANK YOU, Trinidad James! It irks me that music fans spend so much time bitching that so-and-so’s latest song is nothing like so-and-so’s monster-hit first song. WTF! If you don’t like the new song on its own merits, that’s fine, but just accept that there’s no repeating the impact of a big debut.  That first smash is a moment-in-time, lightning-in-a-bottle, where-did-this-guy-come-from-OMG kind of thing. Like James says, that experience can’t be mass-produced and re-sold every season.

I just so happened to visit The Fader offices myself on Tuesday, with my gorgeous rapper friend Gangsta Boo. She’s visiting New York to record some songs for a mixtape (“It’s Game Involved“) she’s releasing on May 20 and to meet the press. She invited me to come along to her meetings, so I’ve been following her around like an entourage of one. At The Fader, we chatted with publisher Andy Cohn, who inspected the diamonds inside my onyx skull ring. Boo did an interview with 1200squad.com, which is part of the Fader media family. 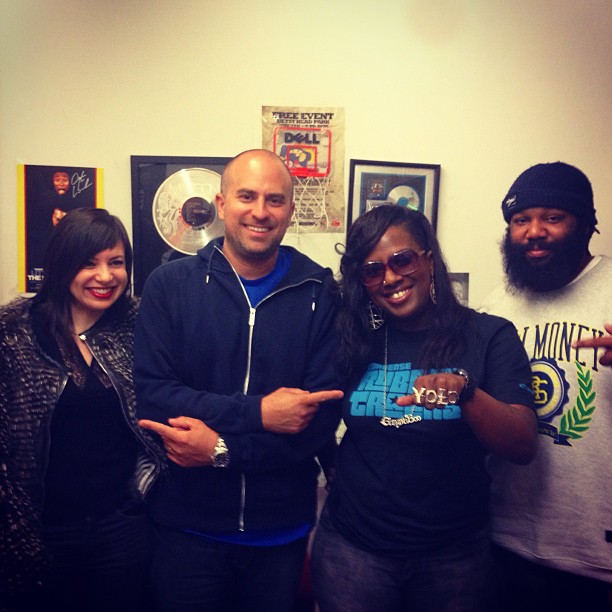 While all this was going on, at some point, someone asked for our shoe sizes and re-emerged with gifts of Puma sneakers. Normally I’m not a big sneaker fan because I don’t like flats — which is why I do love wedge sneakers — but I’ve always had positive feelings about Puma because I had Clyde sneakers back in the day. I also adore neon pink and patent. 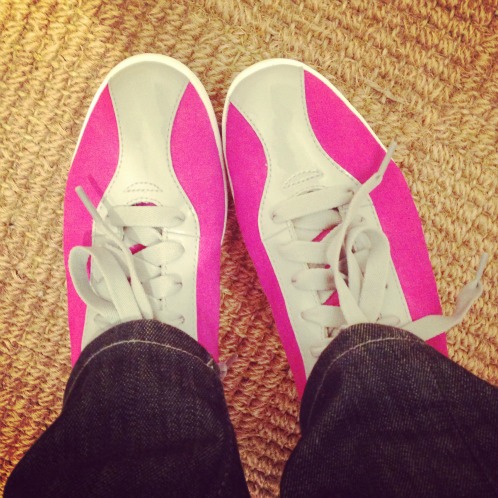 These remind me of bowling shoes in a good way.

Boo got high-top Pumas, which she wore when she appeared on Kay Slay‘s show on Eminem’s satellite radio channel, Shade 45, on Wednesday. 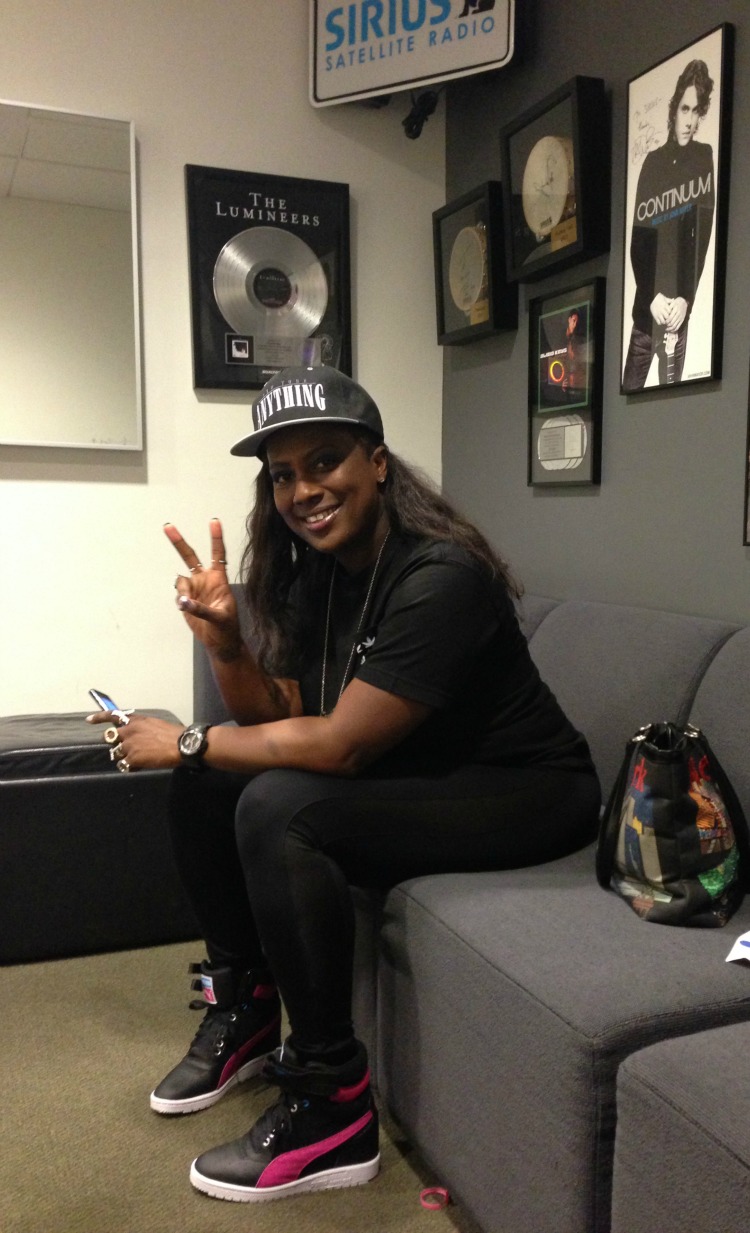 Boo in the Shade 45 green room.

As we left The Fader, I said to Boo, “DAFUQ? When you go to magazines, they give you presents? When I go to magazines, I have to give THEM presents!” Also, The Fader didn’t make me sit on the floor! That’s a major upgrade for me. Seriously, I have meetings at major fashion magazines where I wind up kneeling on the floor, with my jewelry on a coffee table. This takes place in the lobby, near the elevators. Apparently, there’s not an inch of desk or table space available in the actual offices, so designers display their wares in the vestibule. It might work better for a clothing designer who can probably do the thing while standing up or at least sitting on the couch, but for me to be able to reach all of the jewelry, I wind up on the damn floor. Just giving you a little behind-the-scenes insight into the glamorous world of fashion. To be honest, I prefer doing things Boo style.

While I was adapting to the ways of the music industry, my fashion-blogger background was rubbing off on Boo. She took an action shot of me in the midst of one of my favorite New York activities — catching a cab — and, before posting it on Instagram, dutifully asked for all my outfit information. 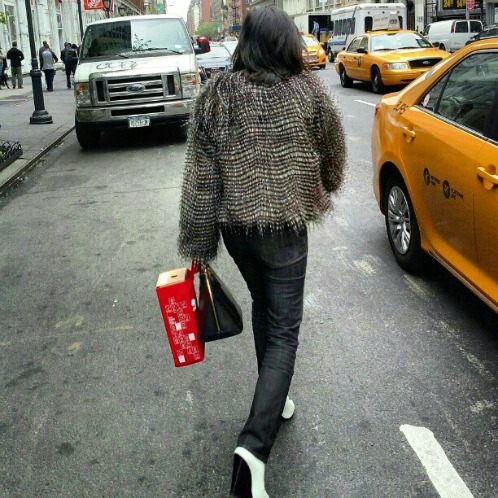 I think she was a little disappointed when I couldn’t recall the origins of the sweater I was wearing. It’s not seen in the photo, of course, but she was trying to be very thorough. Maybe I can convince her to switch jobs with me for a week. I like sitting on furniture!

How to Stalk Peeps and Things in This Post

You might also like
What Wendy Wore: Visiting Chicago
Beyoncé, Kerli, Inspiration and Imitation
What Wendy Wore: Decade to Decade
Previous Post: « Designers Speaking Their Minds, and Me at Melina Bee
Next Post: Fashion Repeats Itself: Side-Ass Style »