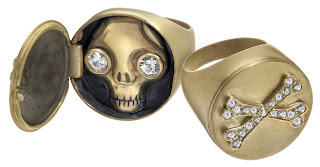 Imagine my delight when a magazine called L.A. Confidential used my Juana ring to illustrate that skulls were a “Do” in their Late Spring issue. Imagine my annoyance when they credited the photographer for the photo and not me for the ring! Now imagine that a gorgeous client who OWNS this ring just emailed me from L.A. to say that skulls have moved into the “Don’t” column at good old L.A. Confidential along with my ring! Well, you don’t have to imagine that; it’s true! I am as proud to be a Don’t as I was a Do, but if those jackholes credited the photographer again and not me, I’m going to have to beat a bitch’s ass! What, do they think it’s just some nice clip art that fell into their possession?

Anyone who gets this magazine and scans the page for me will be my hero! I’m definitely going to put these pages together on my new website. A Do in May and a Don’t in October! Hot!

Before I teleport back to the 1800s to tell folks of bygone days that their skull pieces will be considered ugly in October 2007, allow me to address the trendies. Trendies, don’t say I never did anything just for you. With this amazing heart locket, no one from L.A. Confidential will ever guess you have a skull on your person! It will be our secret. Or you can read my recent comments on the staying power of memento mori here. 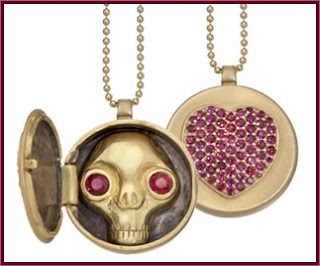