In 1966, my favorite designer, Ossie Clark, discovered rolls of unused snakeskin sitting in a warehouse. One of his snakeskin jackets was exhibited at the Victoria and Albert Museum in London in 2003. 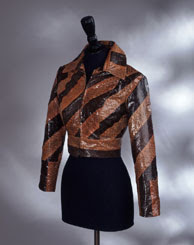 Not my jacket, unfortunately.
Photo of 1967 jacket from the V&A

He gave one of the snakeskin jackets to a woman who worked for him, in lieu of cash, according to the story I was told. Ossie was never very good with money. The woman struck a dramatic pose while wearing the jacket and accompanied by her Afghan hounds. 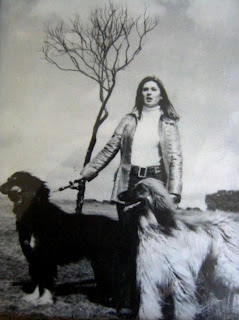 Thank you, Pat, for sharing this beautiful photo. Thanks to C20 Vintage for finding the jacket for me.

Last year, I bought the jacket from the Afghan-owning lady. Tonight was the first time I wore it. Here I am striking a non-dramatic pose outside a drugstore with two uncooperative Pekingese. 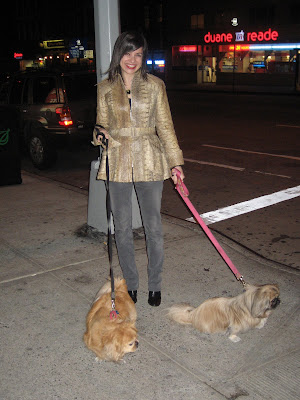 My husband took this photo of me in Pat’s former Ossie jacket.

While I was looking for photos of Ossie’s snakeskin work, I found an incredible site devoted to model Suki Potier. She dated two tragic ’60s icons: Guinness heir Tara Browne (the “he blew his mind out in a car” reference in the Beatles’ “A Day in the Life“) and Rolling Stone Brian Jones. Suki is third from the left in the following photo. On the far left is Linda Keith, Keith Richards’s girlfriend, who is wearing a snakeskin jacket and matching skirt. 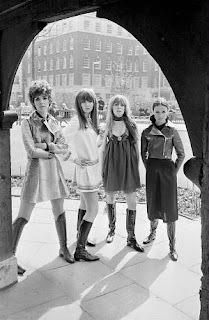 Photo courtesy of sukipotier.tripod.com
Here are the same outfits and models in a different pose. Not only is Linda wearing the beautiful snakeskin outfit … she’s wearing hot over-the-knee boots as well. 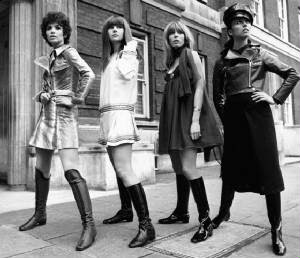 Sadly, Suki and her husband Robert Ho died in a car accident in 1981. The person who did the Suki Potier site has done wonderful tributes to these other beautiful (and often tragic) ’60s It Girls: