Welcome again to Music Hum, my not regularly scheduled but unexpectedly frequent series on vintage music. In this post, I will amaze and delight you by connecting Disney’s Pirates of the Caribbean movies to the Sex Pistols! 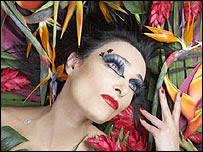 Remember Siouxsie?
As I mentioned last week in my post on punk icon Siouxsie Sioux, the Sex Pistols inspired a lot of musicians. Among them was a fellow named Stuart Goddard, aka Adam Ant, who played bass in a rock band that headlined the Pistols’ first concert. After seeing the Pistols perform, Adam became determined to form his own Sex Pistols-inspired group. (This was a typical reaction to a Sex Pistols concert: see Joy Division.)

The Sex Pistols inspired pretty much everyone for a while.
Photo from The Filth and the Fury/Fine Line Features

While Adam eventually formed a band known as the Ants and toured with Siouxsie, he wasn’t very successful. In 1979, he hired Sex Pistols manager and Vivienne Westwood boyfriend Malcolm McLaren to manage the Ants. McLaren paid him back the next year by walking off with all three of Adam’s Ants and turning them into the band Bow Wow Wow.

Adam may have gotten mad but he also got even. He found himself some new Ants, made a hit record (its direction possibly influenced by McLaren’s interest in world music) and became a leader of the post-punk New Romantic music scene. Captain Jack Sparrow definitely owes a debt to Adam’s tribal-slash-pirate costumes. And this is where I prove that someone at Disney was indirectly inspired by the Sex Pistols. Behold! 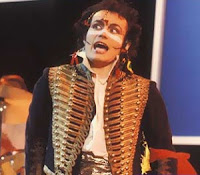 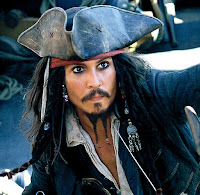 I know Johnny Depp likes to talk up the Keith Richards connection but when has Keith reminded anyone else of a pirate? Please! Keith is more like the living undead. Call me when Disney does a zombie movie and I’ll do a zombie-to-Keith comparison.

For your enjoyment, I present the gorgeousness of Adam Ant in hip-swiveling action in his Antmusic video. Trust me, my peeps. Whether male or female, we all wanted to look just like Adam back then. In fact, I still kind of want to look like that! Bring on the face paint!

Meanwhile, McLaren found a teenage singer for Bow Wow Wow, the “UK Post-Punk Candy Pop Surf Legends,” as the group is now described on its MySpace page. And what would a hot new group be without a little controversy? Beauteous singer Annabella Lwin posed nude as the woman in Manet’s Le déjeuner sur l’herbe … at the age of 15. McLaren got reprimanded for exploiting a minor and Bow Wow Wow became notorious. In other words, another happy ending! I think the photo is quite beautiful. What?! She didn’t LOOK 15! Honest, officer, I thought she was legal. 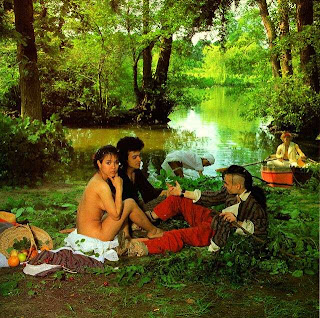 Annabella was like a nubile Adam Ant, so I wanted to look like her too, except less topless. 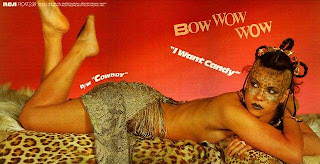 In fact, I still kind of want to look like that! Bring on the Mohawk!

Bow Wow Wow’s most famous song is I Want Candy, which was actually a cover of a 1965 song by The Strangeloves. Behold the hotness of Annabella Lwin walking into the ocean in her skimpy punked-out t-shirt dress in Bow Wow Wow’s I Want Candy video.

You can imagine how thrilled I was when director Sofia Coppola used Bow Wow Wow in Marie Antoinette. Check out the clip. Queens, clothes, dessert, Champagne, jewelry, dogs, dogs wearing jewelry, a gay hairdresser and Bow Wow Wow … all the necessities of life in two minutes and 44 seconds.

And on YouTube, someone creatively synched up the Strangeloves’ original track with some crazy vintage dance footage.

Other artists have covered “Candy” but Bow Wow Wow and the Strangeloves are all the Candy you need, unless you have a sweet tooth like me, in which case you also need this candy.

If you’ve developed a pirate passion thanks to the Adam Ant portion of this post, you should consider this diamond skull pendant I’ve put on sale. Look at his cute eyepatch! He’s only $300. If you’re interested, email me at wbjewelry (at) gmail dot com. 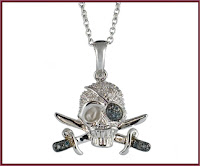