I don’t like to count my chickens before they’re hatched, but at the moment I’m cautiously hopeful for Joe Biden. Keep your fingers, toes, eyes, and all other body parts crossed! 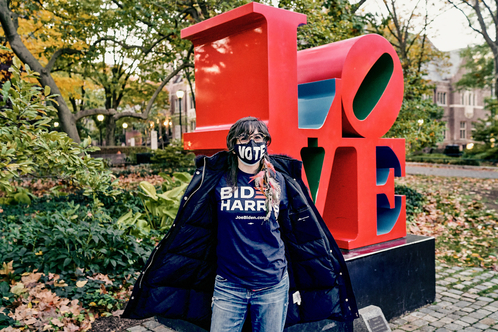 In Philadelphia, the day before Election Day.

I’ve read and heard a lot of people bemoaning the fact that Biden’s lead isn’t the landslide they hoped for. In response, I will quote Bart Simpson: “Au contraire mon frère.” If you take into account the shameless and even violent voter suppression seen all over the country, any win is a huge win. Fuck, a tie is huge when you think of all the blue votes required to overcome so much GOP cheating!

Anyway, if Joe Biden and Kamala Harris truly are in line to be the next president and vice president of the United States, we can all relax. Just kidding! After we catch up on our sleep a bit, we have to bust our asses to dismantle the white supremacist system that enabled a demagogue like Trump to take office and unleash brownshirt-style hell. It’s not about trying to change the minds or hearts of diehard racist individuals. They are clearly beyond hope. We need to attack the laws, customs, and institutions that are used to inflict self-serving and contradictory authoritarianism on others. Check out the next steps I wrote about in this Instagram post and follow the organizations I tagged.

And now … we keep working! We’ve won a battle but not the war against white supremacy and minority rule. Among other things, we need to eliminate the electoral college, end voter suppression and sanction states that permit it, restore voting rights, end Citizens United (big money in politics), and mandate automatic voter registration across the country. If you’ve been using @resistbot and other methods to pressure your Democratic elected officials, you should be using it twice as much because now they have no excuse for not taking action. @senschumer … you’ll be hearing from me as usual. Also we have to keep supporting the pipeline for new progressive people to win elections down ballot. Local races have a profound impact on the national level. Support @runforsomethingnow and @sheshouldrun and the @mvmnt4blklives Electoral Justice League among other organizations. Also support AMAZING local groups like @newgeorgiaproject and @detroit_action and @onepennsylvania that have done years of organizing to fight for Black and brown voting rights. … I’m on a call right now hearing about @detroit_action organizing 20k first-time voters and 12k same-day registrations. 👏🏼👏🏼👏🏼 #wemakemichigan coalition was on the ground all night to make sure #everyvotecounts

Of course, we have to attack racism in all aspects of life, not just in the electoral system. Defunding the police and redirecting that money to helpful community services including mental-health crisis teams is high on my list. In New York, it’s obvious that the NYPD is a rogue agency, reporting to no one except itself, with a long history of its own crimes going unpunished. This week, I got a glimpse of policing in Philadelphia. I was in town to help Make the Road Pennsylvania get out the vote on Election Day …

In #philadelphia with @maketheroadpa to encourage vote tripling. You can do that yourself, anywhere! After you vote, take a selfie with your voting sticker and TEXT it to three friends and say, “Hey, I voted, did you?” If they did, tell them to text their selfie to three friends to check in. Of course, if someone hasn’t voted, make sure they know where their poll site is and what hours it is open! #volunteer #electionprotection #electionambassador #maketheroad #maketheroadpa #voterselfie #election2020 #electionday #votingmatters #votetoday #voteblue2020 #everyvotecounts

… and the day before, I joined a Black Lives Matter march protesting the October 26 police murder of Walter Wallace Jr., a Black man whose family called for help because he was having a mental-health crisis. We were a small, peaceful group, carrying banners and chanting as we walked from Malcolm X Park to the University of Pennsylvania campus. 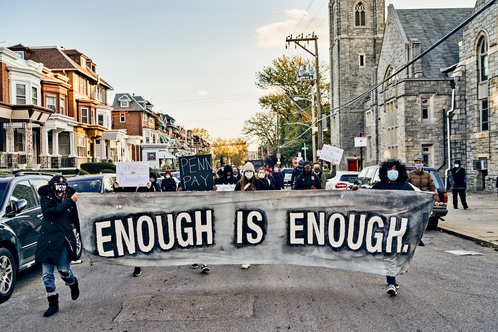 I’m on the left. Ebony, the event organizer, is on the right.

The protestors were outnumbered by cops. The bike cops were the biggest presence, but there were also police cars and even a helicopter overhead. 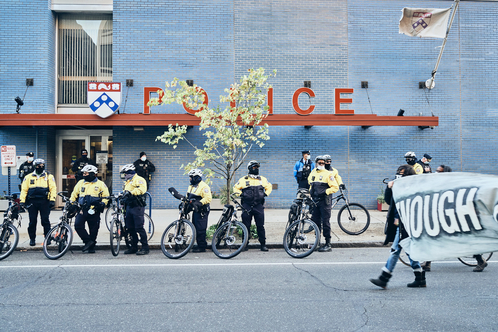 This photo by George De Castro Day happened to be taken as we passed a police station, but the bike cops were with us from start to finish.

Note the plastic handcuffs on this guy’s handlebars. The police didn’t arrest anyone, but they were ready, willing, and able. 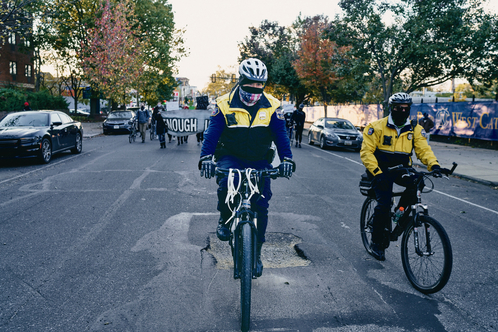 There are no good cops in a racist system. Photo by George De Castro Day.

We were lucky, unlike protestors who were violently arrested in New York City tonight by cops wielding their bikes as weapons again. Obviously, I could go on forever about the social ills that need to be fixed in addition to policing. The good news is that many grassroots activists have been working on these issues for decades, so you can use Poodle to find out where your time and talents can be best spent. (If you don’t find anything via Poodle, SpaceNook, OR any other evil online resource, feel free to ask me for help — but I’m going to ask you what your research turned up!) In the meantime, if you’re in New York City, one small thing you can do is put the number for NYC Well into your phone and call that instead of 911 if you see someone in danger due to a mental-health crisis. NYC Well is available in more than 200 languages, 24/7/365, and can provide mobile crisis response teams.

By the way, if you need help yourself, you can call, text “WELL” to 65173, or chat with an expert online. These are stressful times in many ways, so remember that someone is there for you, day or night!