Exactly three years ago, I was at Coachella, thinking about right-winger Neil Gorsuch‘s swearing-in to the Supreme Court a few days earlier. In the 1980s, Gorsuch was one year ahead of me at Columbia University. While I didn’t know him personally, I knew who he was, because — in addition to founding a conservative campus paper called the Federalist — he wrote contrarian op-ed pieces for the Columbia Daily Spectator, the established campus newspaper where I was an editor. Decades later, he was on the Supreme Court, and I was in the front row for Lady Gaga. “Where did he go wrong?” I joked.

It was a rhetorical question, because even in the ’80s, Gorsuch was today’s kind of wrong-headed Republican — a white man who argued that attempts to improve other people’s lives weren’t reactions to the centuries-long discrimination perpetrated by a patriarchal, white supremacist, capitalist ruling class, but discrimination against the most advantaged members of society. Thirty years before the GOP’s commitment to both-sides-ism and big money resulted in an authoritarian president who has spewed more than 15,000 lies (that number excludes the recent torrent of falsehoods related to the coronavirus crisis), Gorsuch asserted that it was a “fact that no one has a monopoly on truth,” not even South African activist Nelson Mandela, who was a political prisoner at that time. That red-flag statement from a future judge came from Gorsuch’s Feb. 25, 1987,  column critiquing the style and substance of on-campus protests against Columbia’s gentrification of New York City’s Upper West Side and in favor of corporate divestment from apartheid South Africa. “Remarkably … campus activists all remain solidly united behind certain policies they view as ‘moral’ and irrefutable,” he marveled. The kind of tyranny he worried about was  “the tyrannical atmosphere of ‘ideas’ that has so dominated life” at Columbia since the 1960s.  Why not consider whether “modernization of our neighborhood might actually be good for the community” or that “divesting from companies on their way out of South Africa is not productive”? 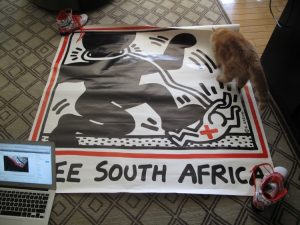 My giant Keith Haring anti-apartheid poster from the 1980s.

Interestingly, that worldview helped Gorsuch develop ties to Coachella at least a dozen years before I first attended the the music festival in 2016. Gorsuch, in his lawyer days, represented Coachella’s anti-LGBTQ+ billionaire owner Philip Anschutz, and it was Anschutz who helped set Gorsuch on a judicial path, as New York senator and Senate minority leader Chuck Schumer noted in March 2017:

“Let’s look at how Judge Gorsuch got to this point. He was recommended for the federal bench by Philip Anschutz, a hard-right special interest billionaire. Then he was handpicked for the Supreme Court by the right-wing special interest laden Heritage Foundation and Federalist Society.”

That statement came days after Senator Sheldon Whitehouse of Rhode Island, in the confirmation hearings, pressed Gorsuch on exactly who spent $17 million on campaigns to block Merrick Garland’s Supreme Court nomination under the Obama administration and then promote Gorsuch under Trump. What do they see in you, Whitehouse asked Gorsuch, who answered, “You’ll have to ask them.” Whitehouse responded, “I can’t, because I don’t know who they are.”

Anschutz’s ownership of Coachella always made me feel conflicted about attending the festival. It’s disturbing to know that he profits off Coachella’s live-and-let-live/LGBTQ+/pot-smoking entertainers and attendees, and then funnels that money through his complicated holdings to far-right Christian organizations such as the Alliance Defending Freedom, which has been identified as a hate group by the Southern Poverty Law Center. The problem is — as I pointed out in this 2018 post — that avoiding Anschutz isn’t as simple as skipping Coachella. AEG, his company, is the second-largest music promoter after Live Nation, with more than 90 venues and 25 music festivals around the world. It’s also the largest owner of sports teams and events. For instance, Anschutz owns a third of the Los Angeles Lakers basketball team and AEG owns Staples Center, where they play. AEG also owns the O2 Arena in London, and just four months after Coachella 2017, a regulatory inquiry in the U.K. forced AEG to drop a plan that would require performers who booked O2 to perform in Staples and vice versa, rather than taking their show to any venues owned by competing music promotion companies such as MSG. Basically, when Anschutz isn’t tampering with the judicial system, he’s doing his best to kill off competition in the entertainment industry even though he already has more money than he could ever spend. Why? Because billionaires always want more money and more power. They just do.

The vast, deliberately anti-competitive reach of Anschutz and AEG mean that even the biggest stars in music have negligible power against it. Want to denounce Coachella? Fine. But you can forget about performing at the Grammys, because AEG’s media subsidiaries include Ken Ehrlich Productions, which has produced the Grammys for 40 years. Speaking of the Grammys, AEG has made money off Grammy Hall-of-Famer Elton John’s tours for more than a decade, so it made sense for Anschutz to use the star as cover in 2018, the year after reports on Anschutz’s political beliefs and maneuvering went viral. The donation of $1 million to Elton’s AIDS foundation — a rounding error when it comes to the amount of money that Elton has generated for the company — is deeply cynical. I’m sure Satan himself admired the way that the amount of the donation exactly matched a 2017 donation to Colorado Christian University, where gay students must swear to stay celibate and are forced into a form of conversion therapy. No wonder Anschutz prefers to stay “reclusive.” It must have burned him up to reinvest some of his Elton-generated pocket change into the artist’s good cause just because people snooped around in his tax returns. Can’t a billionaire stack the Supreme Court in peace? Dang.

Anyway, as much as I love slapping hands with Bad Bunny …

… and going to lots of non-Coachella concerts, I was okay with committing myself to more physically demanding type of activism, instead of entertainment, in this crucial election year. 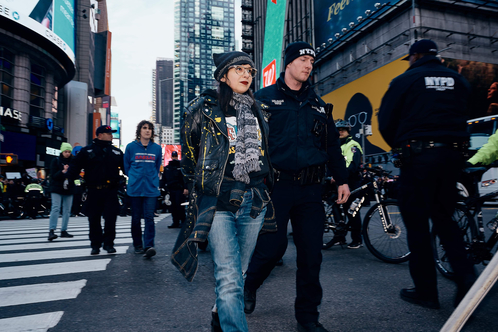 I was a founding member of an Indivisible chapter in 2017; started another chapter last year; met monthly with senators’ staffs; and have written a weekly action newsletter for three years, among other activities. So, trust me, I’ve been busy! But I always managed to save some energy for music, even though securing a front-row view at a general-admission concert is time-consuming and physically demanding. I almost wrote that it’s hard “especially at my age,” but then I remembered all the teenagers who have fainted around me and been carried off by security after standing in the heat for 12 hours. Sorry you missed Eminem after all that time, kids! What do you even tell your friends the next day, I wonder?

This year, as the GOP-controlled Senate barely pretended to consider the removal of a criminal, impeached president, I decided I had to level up my activism, and reserve any tests of my endurance for in-person protests. I have to say that all my late-in-life concert experiences prepared me well for slow processing of arrestees by bored police officers in both Washington, D.C., and New York. I’m great at waiting. I’m also superb at layering clothes for all kinds of weather. My Coachella-tested vintage denim jacket is usually part of my outdoor protest outfit.

Obviously, in January and February, none of us imagined the entire country would be devastated by the coronavirus crisis in March. It’s likely there won’t be any concerts, sporting events, or other large gatherings for the remainder of this year — disastrous not just for the many musicians who make most of their money from touring and merchandise rather than recorded music, but also for the millions of non-performers whose livelihoods depend on the sector. As for me, I’m recalibrating my activism tactics again, while I wonder if there will be a jewelry industry in the U.S. for me to be apart of in the future. The one thing I am sure of is that even though Philip Anschutz is missing out on his Coachella money, he’ll find plenty of ways to make up for it. The ultra-rich always do and corporations always do.