I’ve been republishing all my old Huffington Post pieces on this blog, because they could vanish at any moment from HuffPost. You never know about archives these days. This story is from four years ago, after the N.W.A. movie Straight Outta Compton came out. The movie depicted five group members — Dr. Dre, Eazy-E, Ice Cub, MC Ren, and DJ Yella. 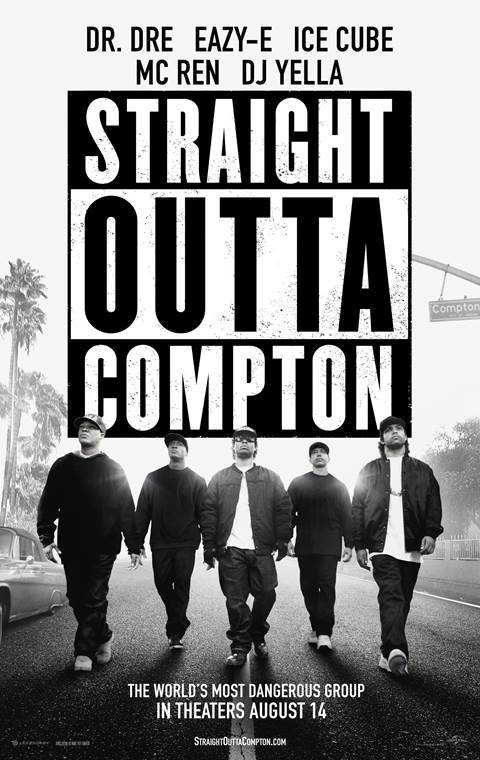 It nagged at me that the cover art for the original 1988 Straight Outta Compton album showed six guys. 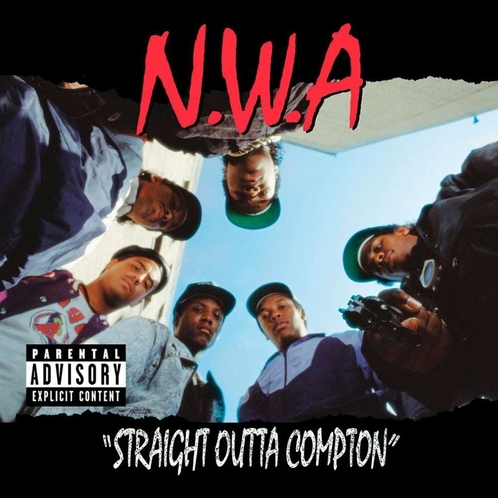 If this was supposed to be a group-origin story, where was No. 6? I figured I had to answer my own question and that’s why I tracked down Arabian Prince. I interviewed him over the phone, but I’m happy to say MrB and I got to meet him in person in 2016. 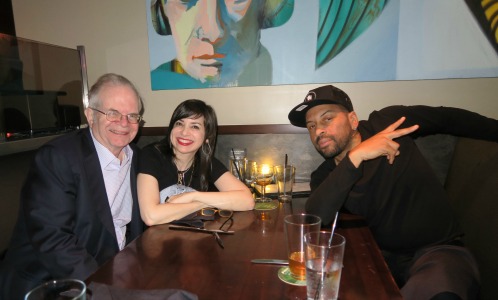 MrB and I with Arabian Prince.

Learn about Arabian’s view on being erased from the movie; his memories of creating “Supersonic” for JJ Fad; and his business role model:

Arabian Prince says he’s not angry, but he knows people who are. Although he was one of the founding members of the rap group N.W.A, he was left out of the hit movie Straight Outta Compton and, as a result, people are seeking him out on Facebook to vent. “I’ve got hundreds of people complaining and they’re more mad than I am,” he says, “The people I went to see the movie with … they’re mad!”

During a phone call from his home in Marina del Rey, Calif., Arabian — born Kim Nazel — acknowledges that it doesn’t “feel good” to be “erased” by the movie, but muses, “If people want to change history, they’re going to do it. People have changed history since the Bible. We don’t know what the real story of the Bible is.”

As for the real story of N.W.A, Arabian says, “Maybe for 50% of the [movie] scenes, I was there in real life, on stage, or in the studio.” He says a lot of N.W.A’s early music production was done with his equipment.

Arabian met Andre Young, now the music mogul Dr. Dre, in the early 1980s, while both were DJs in the West Coast electro music scene. (Arabian describes electro — the forerunner of today’s electronic dance music — as an up-tempo blend of Parliament Funkadelic, Prince and the German electronic-music band Kraftwerk.) Arabian grew up in Compton, Calif., surrounded by music: an only child with a pianist mother, a bass-playing stepfather, and a funk-loving uncle. His father was a talk-radio DJ at KACE-FM, and, as a teenager, Arabian would hang out in the control room and mix music.

That led him to DJing and producing records. One day, while “messing around in the studio,” Arabian whipped up the electro classic “Supersonic,” with the female rap group J.J. Fad, and released it independently. (Years later, the song was sampled in two platinum-selling records: Fergie’s 2006 “Fergalicious,” and Eminem’s 2013 “Rap God.” Arabian sued for his share of the royalties for “Fergalicious.”)

But electro was starting to evolve “because of our life situations in the hood,” says Arabian. “Early on it was all about the partying and the girls and the freaks in the club,” but growth in gang activity made big DJ parties unsafe. Plus, young black people in cities like Compton felt increasingly targeted by the police. Arabian and Dre “had met Eazy-E [Eric Wright], who was the neighborhood pharmaceutical technician,” says Arabian with a laugh. “He was already on the street.” With the addition and influence of Ice Cube [O’Shea Jackson], MC Ren [Lorenzo Patterson] and DJ Yella [Antoine Carraby], the hardcore-rap N.W.A was born.

In 1987, N.W.A released its debut single, “Panic Zone.” Arabian was a co-writer and vocalist. When Eazy-E and music manager Jerry Heller formed Ruthless Records that year, Arabian provided a gold-record hit by re-releasing “Supersonic” on the label. “People said that record was the record that allowed Eazy to open his first bank account,” Arabian says. “I put Dre and Yella’s names on it as co-producers just because we were a family, even though I did the record by myself.”

What started out feeling like a family turned into a business under Heller — one with opaque finances, according to Arabian: “Jerry took control and kind of had excuses for everything.” In the movie, it’s Ice Cube who first raises questions about money, accusing Heller of not paying the group properly and then quitting over the dispute. (Dre later leaves Ruthless for the same reason.) In real life, Arabian says, “I was the one that was yelling and screaming about royalties. I was a solo artist first so I knew what royalty statements were. I knew that when you sell this many records, every quarter you get a statement, you look at that statement, you see how much money came in and you share the money. That wasn’t happening.” He also says they weren’t fully paid for touring.

As a result, Arabian quit N.W.A just prior to the 1988 release of its platinum-selling studio album — and the movie’s namesake — Straight Outta Compton. Before he left, he recorded the electro track “Something 2 Dance 2” and posed for the album’s now-iconic cover. (Going counter-clockwise, Arabian is the second person from the top, between Ice Cube and Yella.)

Arabian says people sometimes ask if he feels “stupid” to have left N.W.A right when it was “blowing up.” He responds with questions of his own: “What does ‘blowing up’ mean? What does the fame side mean if I ain’t getting paid?” When he speaks about the music industry at events such as the Red Bull Music Academy, he has this advice for aspiring artists: “The first thing I tell people is take care of your business. Make sure you copyright your stuff, make sure you get into one of the performance societies like ASCAP, do your research. When we were young there was no Internet … now everything and anything is on the Web that you want to know.”

Interestingly, he says he “still talks” to Heller. (He also stays in touch with Ren — “a helluva emcee” who “didn’t get his just due in the movie”— and Yella.) “I didn’t have a problem with [Heller] once I figured out what was going on … but I’m not going to sit around and let you keep manipulating business in that way.”

“Even in the movie,” Arabian says, “there’s a scene where Cube is sitting there and the reporter asks, ‘How does it feel to have all this money?’ and Cube couldn’t hardly answer! He’s like, ‘Uh, I buy curl activator and Raiders clothes’ because that’s probably all he could afford.”

After N.W.A, Arabian put out his first solo album, Brother Arab, in 1989. “It was alright. No super-duper blow-up hit, but I made my own money.” Then he followed an interest in technology into a new career: “I taught myself how to do animation and programming and got into the whole gaming thing.” Making contacts through graphics and technology conventions, he moved into special effects, working on movies including The Addams Family (1991), Mighty Morphin Power Rangers (1995), and Contact (1997). More recently, he started a virtual-reality company. He goes to 10 or 12 technology conventions a year to keep up to date. He also DJs in the U.S. and does European tours: “We still do the electro stuff. They’ve never stopped loving it in Europe, so I’ve been performing that forever.”

Arabian, who turned 50 this year, keeps in shape by playing basketball seven days a week — twice on Mondays. He plays golf as well. He’s a video-game fan, though his expertise has spoiled him for “shoot-‘em-up” games: “When you’re really good it becomes boring because you have such good aim, and I’m just killing people!” He prefers role-playing games like Borderlands, and raves about South Park: The Stick of Truth.

The lesson to be drawn from his career, Arabian concludes, is that “you can’t pigeonhole yourself.” He cites Richard Branson, the founder of the Virgin Group, as good role model. “I looked at him early on going from a just a little magazine, to a record store, to Virgin Records and then Virgin Mobile and then airplanes and trains and this cat now’s got his own Virgin space thing [Virgin Galactic].”

When asked if he would be interested in a little space tourism himself, Arabian exclaims, “Hell yeah! I’d be the first one!” He adds, “There’s so much more in the universe than here, than California, and the United States, and this world.”