I’ve gotten into the habit of blocking all companies advertising on Twitter. It’s the least I can do to not support the Nazi-enabling, Russian-propaganda-infested social-networking service while I wait for someone to invent a Twitter alternative.  But something in an ad from Chevron, an oil and gas company, caught my eye before I could hit the block button. It was a reference to DonorsChoose.org, which I blogged about in 2008.

DonorsChoose was a GoFundMe for teachers that existed before the actual GoFundMe was launched. Just like a lot of people now use GoFundMe to “crowdsource” (aka “beg for”) money for medical treatment, teachers use DonorsChoose to beg for school supplies.  It’s tragic that health care and well-equipped schools are treated like luxuries in the U.S. while richest-man-in-the-world Jeff Bezos can’t imagine anything better to spend money on than space travel, but that’s where we are right now. (After a bad reaction to his space comments, Bezos announced a $2 billion philanthropic program that includes preschools. For comparison, he liquidates $1 billion in Amazon stock each year to invest in his space program.) 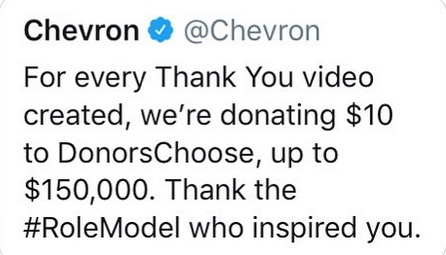 At first, $150,000 to DonorsChoose seems nice, right? But that’s the maximum possible donation. Chevron is only committed to donating $10 per 15-second “Thank You” video created online, which means a whopping 15,000 videos need to be created for DonorsChoose to get the $150,000. That would be an ambitious, generous plan for a very small company. However, Chevron isn’t a small company: In 2017, it reported net income of over $9 billion on revenues of $134.67 billion. Admittedly, the situation wasn’t as rosy when Chevron reported quarterly earnings this summer. While net income of $3.41 billion was more than double what the company earned during the same period the prior year, it fell below analyst expectations, and the company’s stock price fell as a result. Oh em gee. What’s an oil and gas giant to do?

A $3 billion stock buyback was the answer. Stock buybacks are what they sound like — a company buys its own stock back from the public stockholders. That makes stockholders happy because they get cash and their remaining shares of stock become more valuable simply because there are fewer. The company hopes happy stockholders will prop up the stock’s price on Wall Street. Corporate America is currently experiencing a stock-buyback boom, thanks to the Republican tax cuts for corporations. NBC reported on this in June:

“The Republican tax reform package that was supposed to raise wages and spur hiring has instead funded a record stock buyback and dividend spree, benefiting investors and company executives over workers.

President Donald Trump signed the bill in December last year, saying the corporate tax cut would make it favorable for companies to bring back into the U.S. cash stashed in foreign operations.

‘More than 70 percent of this [tax cut] will be returned to workers,’ said White House Press Secretary Sarah Huckabee Sanders at a January press conference after the bill came into effect.

However, companies have instead used the extra cash to spend billions of dollars buying back their own stock, boosting the value of shares held by investors. Buybacks reduce the number of shares on the market, immediately increasing the value of the shares that investors already hold.”

I officially declare this to be a case of …

That’s when an act or donation is presented as philanthropy, but it’s really self-serving and miserly. Try again, Chevron!

You might also like
This Free Advice Is the Exception to the Rule
The Bitchtastic Guide to Business™: Fame Doesn't Equal Fortune
Recap: Rising Star, Lookbook Photo, Small (& Big) Biz
« Coming Soon: The Metropolitan Museum’s Jewelry Show
The Week in Review »