I’ve got a reminder for my New York peeps: Tomorrow (Thursday, September 13) is our state primary day! Get out and vote! Polls are open from 6 a.m. to 9 p.m. Check your registration and polling site online now so you know where to go.

If you turn up at your polling site and you’re told your name isn’t on the books, the poll-site employees MUST give you a paper ballot (called either a provisional or affidavit ballot). If you encounter difficulties getting a provisional ballot from your election district table, there will be a coordinator for the whole polling place whom you can identify by his or her orange badge. 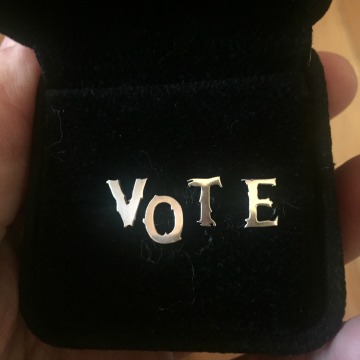 If you’re a Democrat and somehow not feeling “inspired” enough to turn up at all, it’s time to get a hold of yourself!

We have Cynthia Nixon challenging Andrew Cuomo in the race for governor, plus four worthy candidates running for attorney general to replace the ousted Eric Schneiderman (I’m voting for Zephyr Teachout). And if you’re represented by one of the eight state senators who form the Independent Democratic Conference, you have a chance to vote those con artists out! The IDC members run as Democrats but they vote with Republicans in exchange for money and power. They stop any kind of progressive legislation from passing our state senate. Here’s Edie Falco to explain it to you.

The legislation that Republicans and fake Democrats like to block in New York includes voting reform. Early voting is allowed in 33 states and Washington, D.C. In New York, however, you only have one day to vote — a day that often isn’t advertised very well. That’s a form of “soft” voter suppression. Here’s Cathy Curtin from Orange is the New Black to explain that.

Low turnout benefits the asshats who are already in power. They don’t want change, because that might mean they need to get new jobs. So, whenever you stay home on Election Day, thinking you’re protesting the status quo, you’re actually making the status quo very happy indeed. You’re doing exactly what the politicians you hate want you to do. So don’t fucking do that! Here are some more links to helpful information for tomorrow.

Do your part to increase turnout by sharing this information. Bring people with you when you vote. Greet everyone you see with, “Did you vote today?” Remind them that polls open at 6 a.m. and close at 9 p.m. Send emails, share on Spacenook. The one “advantage” of normally low turnout is that it doesn’t take much of an increase in turnout to shake things up, as we saw with Alexandria Ocasio-Cortez in the congressional primary in June.

All of this reminds me of someone I wish I could vote for. I’m just waiting for her to run for something! Lauren Duca is a terrific political columnist for Teen Vogue. She spoke at the #StopKavanaugh rally I went to last month, and got the crowd really energized. I got most of her speech recorded. Check it out.

Speaking of the far-right and unqualified Supreme Court candidate Brett Kavanaugh, if you’re not in New York and busy with the primary tomorrow, you should be using Resistbot to contact your senators and tell them to vote “no” on this guy. I mean, come on. If he were such a great option, why would Republicans be suppressing the vast majority of relevant documentation? People don’t hide evidence of excellence! Test the word RESIST to 50409 to get started with Resistbot.