The MTV Video Music Awards are taking place tonight at Prudential Center in Newark, N.J. The city has warned residents to expect bad traffic … while assuring visiting celebrities that they won’t be affected by Newark’s Flint, Mich.-style water crisis. The Newark Visitors Bureau released this statement:

“We are elated to welcome world-class celebrities, entertainers, and visitors to our City for this exciting weekend.

Whether they are here for the taping of Black Girls Rock! at NJPAC, the MTV Video Music Awards at Prudential Center, or any of the other VMA VIP experiences hosted by our local partners, we want to assure them that the water crisis will not affect their stays.

The water crisis impacts a population of 1-2-3 family homes in areas away from the downtown district.

Restaurants, downtown hotels, and downtown venues that visitors will frequent have not been affected.

We look forward to showing everyone that Newark is a destination city and that we have a lot to offer. We want them all to return!”

In other words, “Don’t worry, stars! It’s happening to other people, not you!” 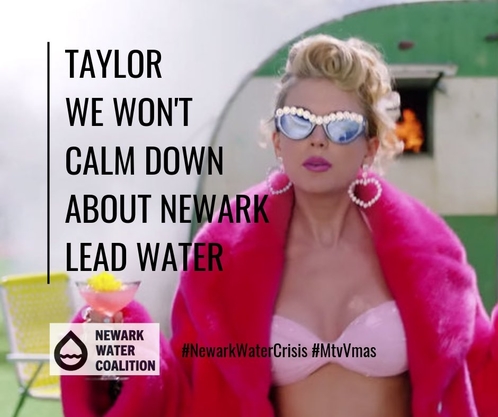 Newark has been plagued by contaminated water since June 2017, when “citywide tests showed that more than 10% of homes across Newark had twice the amount of lead that is considered safe according to federal law,” according to Time magazine. (That safety statistic is kind of strange, considering the Environmental Protection Agency says there is no safe level of lead in drinking water.) The city and state failed to act for a year, at which point the Natural Resources Defense Council and the Newark Education Workers Caucus sued. Newark then said it would provide over 40,000 water filters to residents, but the water supply kept failing tests through this month, when “after testing three homes that were using water filters provided by the city, officials found that two of those homes still had elevated levels of lead in them,” Time reported. That finding caused the city to finally start providing bottled water two weeks ago — but only to 14,000 households, rather than the 40,000 that were originally found to be in need of filters.  Adding insult to injury, people had to wait two hours in the sun to get two cases of water (if they were found to be eligible once they got to the front of the line). 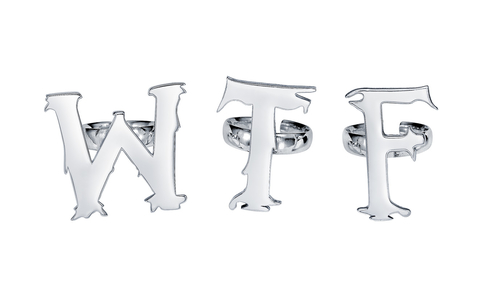 Sorry, my WTF rings are sold out. I just use the photo to express myself!

The national attention drawn to this — thanks to the help of local activists — has led to a positive development. This morning, elected officials announced a $120 million bond program “that will expedite the city’s planned replacement of 18,000 lead pipes,” NJ.com reported, meaning “the lead service lines which connect individual homes to underground mains will now be replaced in 24-30 months, instead of over a decade.” Hmm. Under three years is definitely better than more than 10 years, but it seems like Newark residents might continue to need bottled water donations, considering the severe effects that lead-contaminated water has on children.

The people of Newark deserve clean safe water. Newark has less than 4% of New Jersey’s child population, but 13% of state’s child population diagnosed with elevated levels of lead. How did this go ignored for this long? #NewarkWaterCrisis #CleanWater4Newark @CoryBooker @GovMurphy pic.twitter.com/6Gy175Rtf7

Right now, all of the contradictions in this country are blowing my mind. We’ve given up plastic straws due to environmental worries even as we’re transporting massive amounts of bottled water to communities that can’t drink from their sinks. Then there’s how we spend our money: Trump recently got $2.5 billion of military funding for his nonsensical border wall. Meanwhile, Newark’s pipe-replacement plan will cost only $75 million, while Flint’s was estimated to cost $55 million. Other communities — including Pittsburgh — that are facing the same water-supply problem could use some money too. 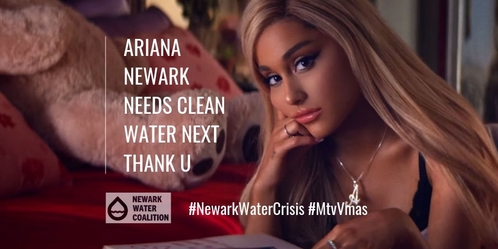 Here are four things you can do this week to help folks coping with contaminated water:

I’ve always gotten a kick out of VMAs fashion, but I’m not sure how motivated I am to do a big post on that this year. We’ll see. No matter what, I’ll have to give some props to Missy Elliott, who is getting a well-deserved and overdue Video Vanguard award this year. Stay tuned!

You might also like
Throwback Thursday: Cold-Shoulder Top Has Its Moment
The Mother of Dragons Is a Real-Life Badass
Sunday Styles Strikes Again
Previous Post: « The Week in Review
Next Post: What Wendy Wore: Slow-Fashion McQueen »