Before I went to the Women’s Jewelry Association Awards for Excellence last night, I did a video reminiscing about the excitement of winning WJA’s design award in 2017. It’s a short video and you should watch it in order to appreciate the funny thing I’m going to tell you next.

Did you watch it? Are you sure? Did you pay attention to the part where I was talking about this year’s nominees and potential winners? Well, there were no nominees or winners in the normal categories of design, retail, media, etc. Ha! Instead, the 35th annual Awards for Excellence dinner honored pre-selected industry “visionaries” including Nadja Swarovski, the first female member of the executive board of her family firm, Swarovski; Mercedes Abramo, the first female president and chief executive of Cartier North America; and Caryl Capeci, president of diamond company Hearts on Fire. A fourth visionary award was given jointly to diamond company De Beers Group and U.N. Women, the United Nations entity dedicated to gender equality and the empowerment of women. (Last year, De Beers announced a three-year partnership with U.N. Women to accelerate the advancement of women in its organization, its diamond-producing countries, and its marketing.)

This program change was announced way back in February, and, it’s one of the many things that I feel has slipped past me while I’ve been preoccupied with activism activities, including the running of my Indivisible chapter and production of a weekly action newsletter. My blog posting in the past couple of weeks, for instance, has been its sparsest in the nearly 11 years I’ve been blogging because I’ve been stretched so thin between business and resistance. I could probably use a vacation to rest my brain and get re-energized but there’s no time for that, so I’ll have to keep being surprised at awards dinners. Seriously, this isn’t my first recent awards-dinner surprise: I walked out of a journalism dinner this spring when I belatedly realized it honored a journalist I hold partly responsible for the mainstreaming of Trump’s brand of fascism.

Anyway, inspired by my recent post on this slow-fashion Versace dress … 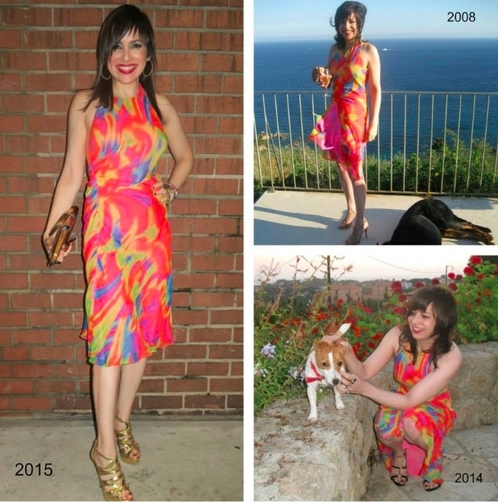 … I decided to stuff myself back into that old favorite, relying on the open halter back to create just enough room for my expanding bosom. 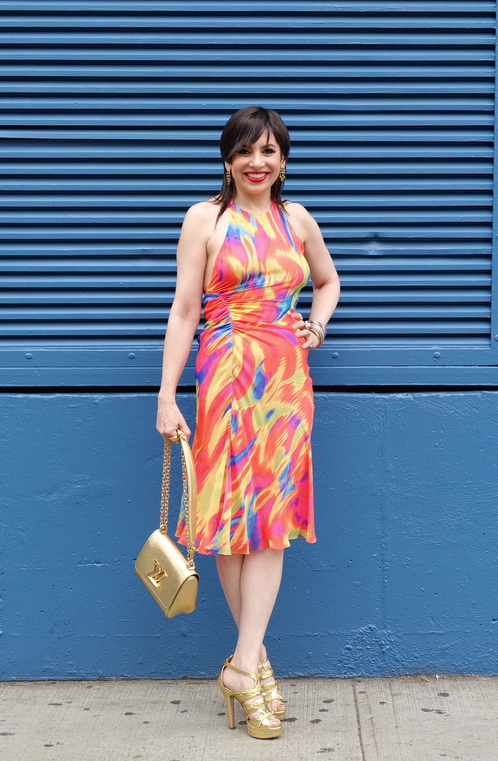 I couldn’t breathe, but so what? Breathing is overrated. The important thing is how much fun I had doing this awards-dinner photo booth with my right-hand women Eryn and our friend Melissa Quick of Chicago’s Steve Quick Jeweler.

Also, bright prints were definitely the look of the evening.

I swear, I’m going to wear my homegrown-vintage dresses until the seams are ready to burst, and after that I’m going to take inspiration from the equally wardrobe-committed Tiffany Haddish and turn this shit into scarves, or quilts, or burial clothing. Whatever works. Versace, I’ll never let go, I promise!

Well, maybe I’ll give some of my great clothes to my niece, Sabrina, rather than be buried in them. And I do hope my Ossie Clark, Patrick Kelly, and Stephen Sprouse pieces someday find homes in museums. Rose in Titanic changed her mind about holding on until death too … then she sold her jewelry to start a new life. Very practical woman, that Rose. Maybe even visionary!