If you’re a jewelry lover in the Chicago area, hurry over to Steve Quick Jeweler‘s Lincoln Park store because owners Steve and Melissa Quick have a single one of my 18K gold Agrippina poison rings in stock for the holidays!

The inspiration for this ring was one of the scandalous historical women of whom I am so fond: the first-century Roman empress known as Agrippina the Younger, to distinguish her from her mother, also named Agrippina. Agrippina #2 has an impressive family tree: She was the great-granddaughter of the first Roman emperor Augustus; the younger sister of the emperor Caligula; the fourth wife of her uncle, Claudius, who succeeded Caligula as emperor; and the mother of Caligula’s successor, Nero. That’s the same Nero about whom it is said “Nero fiddled while Rome burned.” That saying refers to a disastrous fire in Rome in 64 AD, during which 70 percent of the city was destroyed. As History.com points out, Nero was a famous lover of music, but even if he had wanted to fiddle during the fire, the family of instruments that includes the fiddle wasn’t invented until about a thousand years later. Don’t feel bad for Nero though. The legend of his fiddling while people died no doubt came about because of his reputation for “debaucheries and political murders,” among other undesirable behaviors. 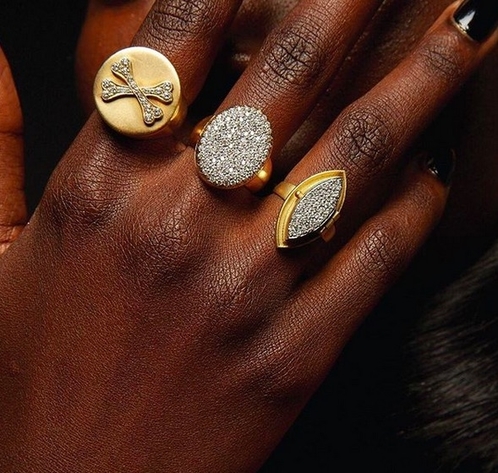 Three of my poison-ring designs. From left: The Juana, the Borgia, and the Agrippina.

One of the murders Nero arranged was that of his own mother, Agrippina. She had always pulled strings for him. He was the son of another one of her husbands, but she convinced Emperor Claudius, her third husband, not only to adopt Nero but to marry Nero to Claudius’s daughter, Octavia. The adopted Nero was made Claudius’s heir over Claudius’s own biological son — quite shocking in a family dynasty. According to some versions of the story, Claudius might have started to have doubts about this move, causing Agrippina to feed him some poison mushrooms before he had time to change his mind. No one will ever know for sure whether Claudius was murdered by mushroom or merely died of natural causes, but, either way, Nero became emperor around the age of 16 or 17.

For a while, Nero let his mother and two other advisers rule for him, but then he rebelled, as children are wont to do. It is possible that Agrippina became so displeased with Nero’s behavior that she started to promote Claudius’s neglected son, Britannicus, as the true heir to the throne. Nero wasn’t having that, so he had Britannicus poisoned at a dinner party. Then he turned his attention to mom. There are conflicting accounts about what happened. Some say he tried to poison her, but she had an antidote on hand. Then, supposedly, he had her set sail in a boat that was designed to collapse and drown her, but she swam to shore. Eventually, he had her stabbed by an assassin. At any rate, it wasn’t easy to get rid of her, and things got worse once she was gone, as Nero devoted himself to hobbies such as spending insane amounts of money; fancying himself an artist; joining religious cults; and mishandling revolts in various parts of the empire. Oh, and he also had his wife Octavia murdered. Eventually, after one revolt too many, the Senate declared him an enemy of the people, and he committed suicide rather than be executed.

Agrippina isn’t someone I would have wanted to know in real life, because a lot of the people who knew her in real life suffered painful deaths. But I do find her fascinating because she was as powerful and ruthless as the men around her, even though she had to exercise her power behind the scenes. I channeled my interest into this poison-ring design. “Poison ring,” by the way, is simply a synonym for “locket ring,” and when I say my jewelry is “to die for,” I’m not speaking literally. If you want to put the secret compartment in the Agrippina ring to good use, I’d suggest putting in a tiny photo or even some solid perfume rather than anything nefarious. Or you can wear the ring like I would, with nothing inside it at all.

The Agrippina ring at Steve Quick is set with 40 points of diamonds and fits a size 6 finger. It’s at the Quicks’ 2471 N. Clark Street store in Chicago, but you can go to any of their branches and ask for it to be delivered to the one that’s most convenient for you. If you’re not in Chicago, call 773-404-0034 and order the ring by phone. This is the only Agrippina I have for sale right now, and it’s the third of a limited edition of five, meaning only five of these rings will ever be made. Act now so you don’t miss out on this rare design!

You might also like
"I Gave It All to Your Cousin Josephine!"
A Mind-Blowing Diamond Eternity Band
Back to Work!
Previous Post: « The Week in Review
Next Post: What Wendy Wore: Casual on Repeat for Jumanji »