If you didn’t already see the movie Hidden Figures about the black female mathematicians who helped the U.S. win the space race, I highly recommend that you catch up with it now. It’s based on the best-selling book of the same name by Margot Lee Shetterly. I saw it with MrB and my designing friend Stacy Lomman last year, and we were all on pins and needles waiting to see if astronaut John Glenn would survive his orbit around the earth — even though that journey took place in 1962 and we knew damn well that he did survive! It’s an achievement for a movie to create that much suspense around the outcome of a well-known event while simultaneously giving long overdue credit to people who made that historical feat possible.


My familiarity with the movie made me extra-interested when I saw Candace Jean Anderson on Twitter last week, asking what would have been a compelling question anyway: Who was only unidentified person — who also happened to be the only woman and the only black person — in a photo taken at the a 1971 International Conference on Biology of Whales?

The woman in this photo was an attendee at a 1971 International Conference on Biology of Whales.

She is the only woman, & the only one captioned "not identified" in the article I found the photo in. All the men are named.

Can you help me know her? pic.twitter.com/MifZvdRXRr

Here’s a close-up of the photo, provided by Candace. 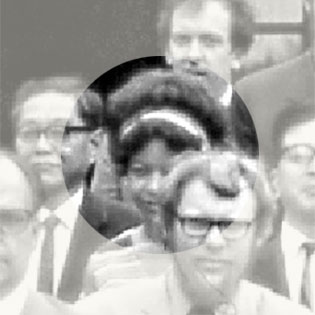 I kept an eye on the thread and was thrilled when Candace got the answer yesterday, confirmed by the partially hidden figure herself: It was Sheila D. Minor, who had a B.S. in Biology and was working in her first job with the federal government. She then became a biological research technician for the Smithsonian Institution; pursued environmental science and received a M.S. from George Mason University; and worked for several federal agencies before retiring from the Office of Environmental Policy and Compliance, of the U.S. Department of the Interior, after a 35-year career. “I loved every moment of my career,” she told Candace.

I’m betting that even though you now know the answer, you’ll find the online search quite suspenseful. Here’s a link to the full thread with all of Candace’s interactions with people offering suggestions and connections. The thread embedded below, showing only Candace’s tweets, is a streamlined way of reading the story. As you’ll see, the names of a couple of other interesting women popped up during the search for Sheila, including oceanographer/lawyer Matilene Spencer Berryman and Suzanne Montgomery Contos, who helped coordinate the 1971 conference.

Another person who visited the thread was media historian Donna Halper, who mentioned she wrote a book called Invisible Stars: A Social History of Women in American Broadcasting, about the “forgotten women in broadcasting, including many forgotten women news-makers.” There are hidden figures everywhere!

And here's me, back in 1968, when I became the first woman in the history of my university to be on the radio. Went on to have a nearly 40 year career in media. Never made equal pay; but I met some amazing and interesting people along the way. pic.twitter.com/SuvryweYEh

Kudos to Candance for her efforts — I hope a book and movie follow!

You might also like
RIP, Margaret Hayes
It's Official: My New Hero Is Antoine Dodson
New Necklace Inspiration, Thanks to Jill Abramson
Previous Post: « Wednesday’s Video: My Moschino Collection
Next Post: The Week in Review »