Sheila Michaels — the woman responsible for popularizing the honoric “Ms.” as a substitute for “Mrs.” or Miss” — died last month of leukemia at age 78.

As her New York Times obituary by Margalit Fox notes, Michaels didn’t invent “Ms.,” nor did she claim to. The abbreviation appeared in a Massachusetts newspaper in 1901, and was later used by stenographers and Marxists. The latter provided inspiration to Michaels: Her roommate in the early 1960s received a Marxist publication addressed to “Ms. Mari Hamilton.”

Michaels liked the idea of an honorific for women that did not reflect marital status. She mentioned it during a radio appearance around 1969. The Times obituary says:

“Not long afterward, when Gloria Steinem was casting about for a name for the progressive women’s magazine she was helping to found, she was alerted to Ms. Michaels’s broadcast.

The magazine, titled Ms., made its debut in late 1971 as an insert in New York magazine; the first stand-alone issue appeared the next year.”

All very interesting, but this is the part of the obituary that made the biggest impression on me. 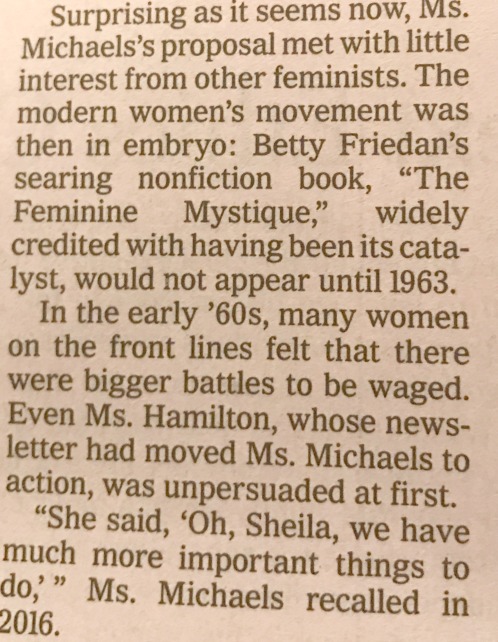 That reminds me of … life in general. How often do people tell us that something isn’t important enough to pursue? That their priorities are the only priorities? Whenever I’m trying to do something different, if I’m not being told that it’s impossible, I’m being told that it’s unimportant. Fuck that! I say only history has a chance of showing what’s important (and even that isn’t guaranteed). As the Times points out, “Ms.” is now used all over the English-speaking world. The newspaper also acknowledges that it didn’t accept “Ms.” until 1986, when I was in college. I had already preferred “Ms.,” but the Times was the paper of record then, and its refusal to use the honorific up till that point did make it seem illegitimate to be identified by anything except your relationship to a man. When the Times got with the times, that meant a lot to me. As the Times obituary says:

I say her real legacy is the knowledge that we can successfully pursue the goals that are important to us, regardless of the naysayers. Thank you for that, Ms. Michaels!

By the way, you may have noticed that I don’t use the New York Times style of honorifics on this blog at all. I have always preferred other news organizations’ way of referring to people by their last names only upon second reference. That way you avoid writing things like Mr. Bundy, Mr. Manson, and Mr. Dahmer (referring to murderers Ted, Charles, and Jeffrey, respectively). I don’t like to refer to evil people so politely. But if you’re sending a letter to me, rest assured that “Ms.” is the way to go. To borrow the iconic words of Janet Jackson: