As a great philosopher (Madonna) once said, “Music makes the people come together,” and the truth of that statement was on display at the “One Love Manchester” benefit concert yesterday.

Ariana Grande — accompanied by performers including Justin Bieber, Katy Perry, Miley Cyrus, Coldplay, Liam Gallagher, Marcus Mumford, and Pharrell Williams — entertained a crowd of 50,000 to raise money for the victims of last month’s terrorist bombing of Grande’s Manchester concert. The show went on despite a terrorist attack on London less than 24 hours before that left Britain “reeling” (not). The British Red Cross said $3 million was raised during the concert alone, with donations still coming in. If you missed the livestream, you can watch the whole concert on YouTube.

In New York, I went to the entirely unrelated Governors Ball Music Festival. I had fun seeing Rae Sremmurd, who had some really young fans; Wu-Tang Clan, which still makes me think of Empress Wu; the energetic festival sign-language interpreters; and the fashion. But the one thing I really want to share is this photo I took of the view on Randall’s Island, where Governors Ball is held. 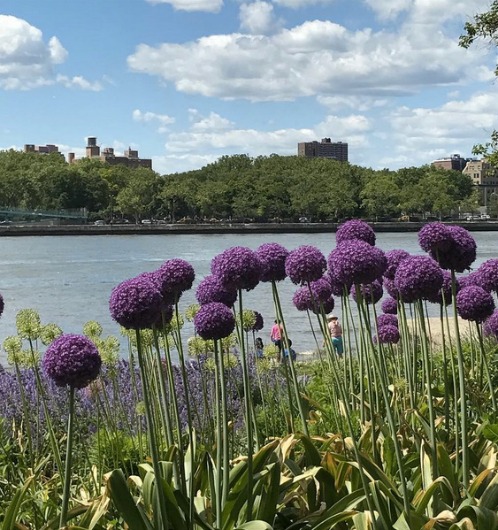 It’s hard to believe that this is in Manhattan, right? But all you have to do is go to E. 125 Street and walk over the RFK Bridge (you can take the bus, but walking is more fun) and you’re in this beautiful place. Thanks to my gorgeous friend Tony Cooler for informing me that the purple pom-pom flowers are called alliums, which are — surprise! — related to onions, shallots, and garlic. These are stressful times, and we all need a break. If you happen to be in New York, stroll over to Randall’s Island. On non-festival days, bring your own music and relax.

You might also like
Never Is the Next New Thing™: Skinny Eyebrows
Almost Perfect
The Rescue of Ingrid Betancourt
Previous Post: « The Week in Review
Next Post: Jewel of the Month: Queen of Scots Snake Ring »