Mother’s Day marked the start of National Women’s Health Week, duly accompanied by a statement full of lies from the Pussy Grabber in Chief. The connection of National Women’s Health Week to Mother’s Day rubs me the wrong way, because what does it mean? Only mothers are women? Or is it that women’s health should only be thought of in terms of motherhood? If motherhood is so precious, than why does the U.S. have the worst rate of maternal deaths in the developed world? In fact, maternal deaths in the U.S. have been rising, even as they’ve declined in 13 other countries. 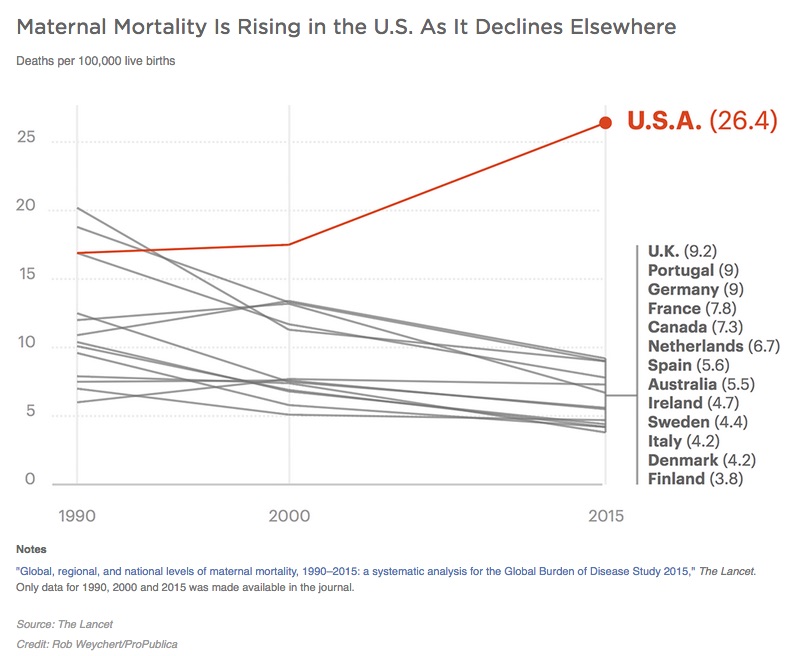 Those statistics come from a six-month investigation conducted by ProPublica and NPR. “The ability to protect the health of mothers and babies in childbirth is a basic measure of a society’s development,” the news organizations report. “Yet every year in the U.S., 700 to 900 women die from pregnancy or childbirth-related causes, and some 65,000 nearly As one expert observed, “We worry a lot about vulnerable little babies. … we don’t pay enough attention to those things that can be catastrophic for women.” According to ProPublica, the focus on the fetus is such that “as recently as 2012, young doctors who wanted to work in the field didn’t have to spend time learning to care for birthing mothers” — a dehumanizing fact that brings to mind a line from Margaret Atwood’s book, The Handmaid’s Tale: “We are two-legged wombs, that’s all: sacred vessels, ambulatory chalices.”

When a health-care system fails women, disadvantaged women suffer the most. That said, no woman is immune, regardless of income or education. Even a medical professional can fall victim, as ProPublica emphasized in its title for the story: “The Last Person You’d Expect to Die in Childbirth.” Thirty-three-year-old Lauren Bloomstein was a neonatal intensive care nurse who had an easy pregnancy and gave birth in the hospital where she worked.  Her husband Larry was a doctor. Just 90 minutes after their daughter Hailey Anne arrived weighing 5 pounds, 12 ounces, Larry started questioning medical staff about whether Lauren’s post-birth symptoms of high blood pressure and severe pain could be the result of life-threatening pregnancy-related hypertension, called preeclampsia. Her caregivers treated her for reflux instead. Subsequently, all of Larry’s proactive attempts to secure help for Lauren were in vain. Twenty hours after giving birth, Lauren died of a hemorrhagic stroke caused by HELLP syndrome, the most severe variation of preeclampsia.

Another article related to women’s health is Kate Daloz’s New Yorker story, “My Grandmother’s Desperate Choice.”  Daloz’s grandmother, Winifred, met her husband, Eddie, in college. They married in 1939 and had their first child, Peter, in 1941. Shortly after the U.S. entered World War II, Eddie was recruited by the newly formed Office of Strategic Services, a predecessor to today’s Central Intelligence Agency. He was deployed to Europe when Win was seven months pregnant with a daughter, Judy, whom Eddie wouldn’t meet until she was six months old.  Ultimately, it was determined that Eddie would stay in Europe indefinitely, with short leaves every six to eight months.  Then Win found out she was pregnant again. Her mother, a nurse, tried to arrange a medical abortion, but somehow those arrangements fell through. Win then sought help from her father, a doctor. He refused, but her French stepmother had some advice: “Frenchwomen take care of these things themselves.” Win died on April 18, 1944, after attempting an abortion with a sharp instrument. Her son was two years old and her daughter was nine months.

That daughter, Judy, grew up to be a nurse and Daloz’s mother. Daloz was 12 before she knew how her Win died. Her mother told her after Kate repeated to her some anti-abortion propaganda she’d heard from her friends. Kate tried to process the information about her grandmother:

These stories jumped out at me because the GOP seems determined to create more Laurens and more Winifreds. The American Health Care Act, recently passed by the Republicans in the House of Representatives, would enable insurers to treat as pre-existing conditions — and deny coverage for — pregnancy and Caesarean sections, as well as sexual assault, domestic violence, and postpartum depression. The list of pre-existing conditions doesn’t include erectile dysfunction, of course.  This gives me flashbacks to the 1990s, when Viagra was introduced and instantly covered by the same insurance companies that didn’t cover women’s contraceptives. , but the issue never completely went away. In 2008, newscaster Jack Cafferty argued that “.” In 2012, Bill O’Reilly — that serial sexual harasser and alleged wife beater — similarly categorized erectile dysfunction as a medical condition, whereas anything related to women’s bodies is, apparently, not related to medicine or health.

To sum it up, an ideal world for certain Republican men would grant them the ability to have sex — with medical help if necessary! — with women who are unable to afford contraception or receive legal, safe abortions. Should those women get pregnant, they can forget about insurance coverage related to labor, in which their safety is already a secondary issue. If you can’t prevent a pregnancy or end one, there’s always adoption but that might not be so simple either. Last week, for instance, the Texas House of Representatives approved a bill that would allow state-funded foster care and adoption agencies to refuse to place children with families based on religious ground. Critics say that could include families headed by gay or transgender people, any non-Christians, people in interfaith marriages, and people who have been divorced and remarried. Meanwhile, there are about 22,000 children in Texas awaiting placement in foster homes. (The bill would also allow agencies to deny teenagers in their care access to contraception and abortion.)

Margaret Atwood had a name for this world in The Handmaid’s Tale: Gilead. I’ve been watching Hulu’s excellent television adaptation of The Handmaid’s Tale, and, as I do, I keep hoping that the series holds no attraction for GOP men. Surely, if they were to watch it, instead of being horrified, they’d be inspired to redouble their already significant efforts to create an oppressive, Gilead-like theocracy. Perhaps Hulu’s next series should be one that’s as terrifying to the misogynists as The Handmaid’s Tale is for women. May I suggest Lysistrata?