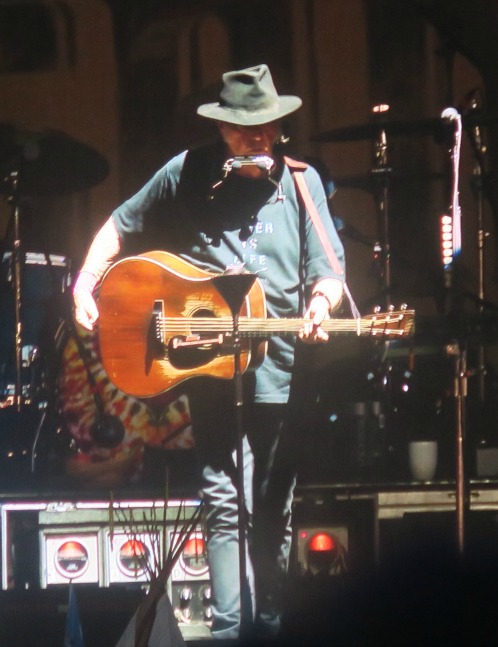 Neil Young, seen on the big screen at Oldchella.

These days, Neil is performing with Promise of the Real, a band that includes two of Willie Nelson’s sons. They did some major jamming, including a version of “Down by the River” that ran more than 20 minutes. With extended versions of so many songs, Neil wound up with only 40 seconds left for his last song. After declaring that he would do a 40-second version of “Rockin’ in the Free World,” Neil and the band played for another eight minutes (including two false endings).

Neil was in good spirits during his own set, but he was on Cloud Nine when he was invited on stage by my almost-husband Paul McCartney during Paul’s own set. They performed “A Day in the Life,” “Give Peace a Chance,” and “Why Don’t We Do It in the Road” together — with Paul requesting Neil whip up a solo for the latter.

I was mesmerized by Neil’s huge grin. As Pitchfork described it:

“The two have played together before, but their bromance felt rare in its giddiness, particularly after seeing Young’s scowl peek out under his hat during his own scorched-earth opening set of fresh environmental pleas and improvised favorites … Instead, a ‘pinch me’ smile was plastered on Young’s face as he stared at McCartney and screamed Lennon’s words of peace — an expression appreciated, and maybe even echoed, in the crowd.” 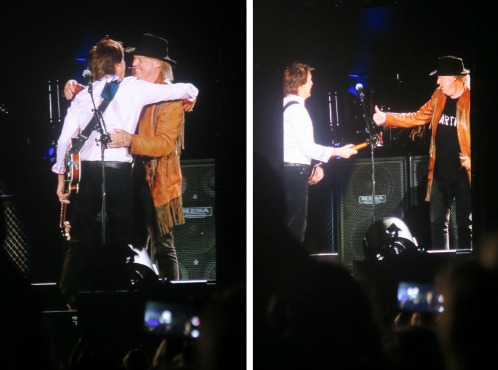 Neil beams at Paul McCartney on the big screen.

I’m pretty sure Neil Young has never smiled so much in his life — not even when he inducted Paul into the Rock and Roll Hall of Fame in 1999.

Another highlight of Paul’s performance came towards the end of his show. The night before, the Rolling Stones paid tribute to the Beatles by covering “Come Together,” so the audience was waiting to see if he’d return the favor. Then he did. Sort of! He played the Stones’ second single ever. But, as he pointed out, that song — “I Wanna Be Your Man” — was written by Lennon and McCartney. Oooh! The shade!

I wore my usual Cavern Club t-shirt to see Macca …

Here for #neilyoung and my almost-husband Paul McCartney at #deserttrip, wearing the Cavern Club t-shirt I wear to all Beatles-related events. #liverpool #beatles #cavernclub #fab4 #oldchella

… but this skirt I saw definitely was the winning fashion statement.

Want it need it have to have it. "Marry Me Paul" skirt at #deserttrip festival. #beatles #paulmccartney #festivalstyle #fab4 #oldchella

Of course, it would have been ridiculous for me to be wearing a “Marry Me” skirt when I’m already almost-married to Sir Paul!