I’m enjoying a weekend at “Oldchella,” aka the Desert Trip music festival, in California. Last night, I saw the Rolling Stones. I missed the opener, Bob Dylan, but the reason why is kind of great; you’ll get that story later. Tonight I’m seeing Neil Young and my almost-husband, Paul McCartney.  Sir Paul showed up last night to watch Dylan and the Stones, meaning he was there to see the Stones cover “Come Together” by the Beatles.

The Rolling Stones covered the Beatles at #deserttrip and Paul McCartney was there in the audience to see it! #rollingstones #beatles #cometogether #oldchella

Because MrB is joining me today — and the reason why he wasn’t there last night is a key part of the “missing Bob Dylan” story — I got seats instead of doing general admission. For some reason, MrB doesn’t believe in waiting 12 hours or so to be in the first couple of rows. Crazy, right? So I nearly cried when I first got there, seeing how far away from the stage I was. I’ve gotten used to being right up front. But the Stones were so great that I eventually accepted watching them on the big screen, while dancing and singing along.

Even from a distance, I became obsessed with the t-shirt with the blue Stones logo that Mick wore for part of the performance. 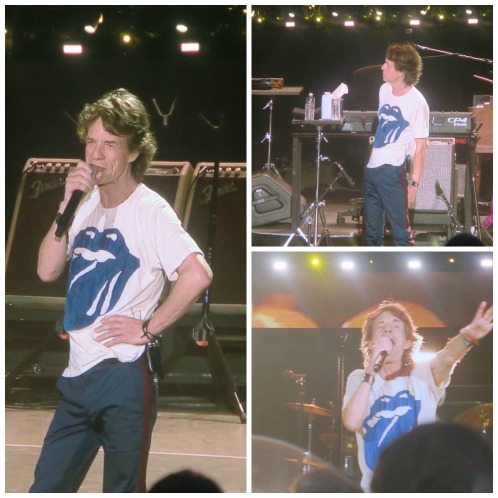 Not my normal close-up photos. These are shots of the giant video screen. *sob*

They’re not selling it at Desert Trip and I HAVE TO HAVE IT. I realize I only want it because I think it’s going to magically give me Mick’s ultra-flat stomach and doll-sized waist (which look so sex-ay on a rock ‘n’ roll guy of any age) but let me have my dreams, okay?

My other Stones-related obsession is Charlie Watts. Don’t worry. I don’t want to wear him or anything. I just want to be him when I grow up. I’m normally very annoyed by the use of the word “effortlessly,” but I’ll make an exception to say Charlie is effortlessly cool. 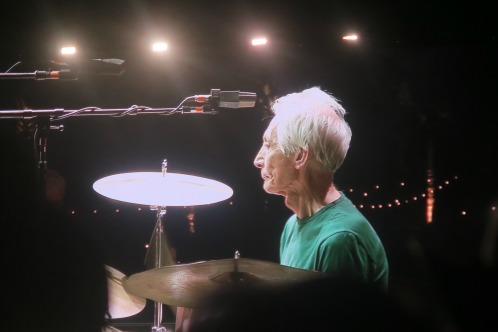 Charlie, from the big screen at Desert Trip.

I just love the way he looks. Plus he’s 75 and playing some of the biggest hits in pop-music history to a crowd of 60,000 (part of which is much younger than newspaper articles would have you think), as Mick Jagger struts his stuff in front of him.

This is life goals for me: Being more of a badass than the grandchildren (or step-grandchildren, in my case.)

Because I’m here, I’m not going to take time out to write down everything I’m thinking in the wake of Trump’s latest embarrassment. But I do want to remark on some of the commentary.

Some men — and some women too, sadly — have made a habit of using social media to respond to women’s complaints about male abuse by deflecting. “Not all men,” is their rallying cry and their hashtag. That irritates me. No one fucking SAID that all men do XYZ, though all men benefit from a patriarchal society. Ironically, a guy rushing to say “not me” IS making it about him. He’s forcing himself into a conversation about the female experience. It’s similar to white people saying, “Not all white people” or “All lives matter” when African-American people are trying to share their reality. You or I or another particular individual might not be a raging racist, but America was built on slavery and it’s ridiculous to deny the way that still affects our society. If you’re NOT a bigot or a chauvinist, you should be able to acknowledge those social issues without becoming personally defensive.

If you still need help understanding this, check out @YesAllWomen on Twitter. It explains that while “not all men” are sexually threatening, “yes all women” do have to fear sexual violence from (some) men. If you’re a woman and you say you’ve never “been careful” in any context so that you’re not exposed to sexual abuse, I’m going to call you a liar. In fact, you were probably openly taught that fear! As my parents used to say when I was a teenager and they wouldn’t let me do something independently, “It’s not YOU we don’t trust … it’s THEM.” This tweet captures it best:

Men: Not all men.
Men to their daughters: Yes, all men. Every single of them.

Anyway, in the wake of Trump’s “Grab them by the pussy” statement, I see some of the “Not All Men” commenters scolding the rest of us for being offended because “boys will be boys.” Suddenly, the kind of things these men said they didn’t do is normal manly behavior — “locker room talk” — that shouldn’t cause any dismay. HOW DO THEY NOT SEE THE CONTRADICTION HERE? And how wrong they are? I already made an exception for the word “effortlessly” above, so I might as well keep going and say something else I typically would not: “Not All Men” speak this way. I am 100% sure of that. Miss me with your “boys will be boys” bullshit!