I forgot to include Kerry Washington in last night’s post on the fashion at the Emmys.

Her sleek, cut-out dress by Brandon Maxwell — combined with her advanced pregnancy — was definitely a “Wear What You Want” look. I approve! Judith Light still gets the award though.

Separately, Fast Company wrote about “The Big Business of Red Carpet” bling. This story has been written before. In 2014, I shared a Vanity Fair article on the topic that was pegged to the Oscars, covering how celebrities are paid substantial sums to wear certain jewelry. The Financial Times ran a 2012 story that covered both jewelry and clothing. That story reached back to 2008, when watchmaker Raymond Weil sued Charlize Theron for wearing a Christian Dior watch to an event when she was contracted to be the face of Raymond Weil. The FT reported:

“It emerged, for example, that Theron was to be paid $50,000 for wearing at least two pieces of Chopard jewellery to the 2006 Bafta Awards in London, and a further $200,000 for wearing jewellery from the firm’s range to that year’s Oscars. In the autumn of 2006, Montblanc agreed to pay a charity $250,000 for Theron to model one of its silver necklaces in an ad campaign. That same year she also wore Cartier jewels to the Golden Globes and, though she was not paid for this, the court ruling noted that a Cartier employee testified that Theron had previously received a $35,000 Cartier ring, a $7,500 bracelet and an $8,000 set of earrings as past “tokens of appreciation” from the company.”

Obviously, the Fast Company story isn’t news to me or anyone who follows my industry closely, but I don’t fault Fast Company for running it, because this is still news to the many people who say to me and other small designers, “Why don’t you just get your jewelry on a big celebrity at the Oscars?” Someone said it to me within the past month. It’s interesting that people who ask me this always use the word “just” too, as if this were a simple task that I had never occurred to me during the 11 years that I’ve been in the jewelry business. Just do it! Just put on your Nikes and run down to the red carpet and thrust your designs upon the eager celebrities! When I start explaining that (a) I’m constantly working the celebrity angle and that (b) I can’t outspend Chopard, people’s eyes glaze over. They just want to give me advice, not hear about business realities, so I’m just going keep that Financial Times quote on my phone to show them. That way I can answer them while saving my energy to work on getting another necklace on Rihanna. Look very closely at this picture, and you’ll see that Rihanna is wearing my Mud Flap Jill necklace on stage in 2012!

I didn’t get a single order for Mud Flap Jill in the immediate wake of that performance, but I got a couple of blog posts out of it. Read all about Rihanna and that necklace here. I’m still making ruby-nippled Mud Flap Jill necklaces and cufflinks in silver and gold. Order yours today! Seriously, order one already. 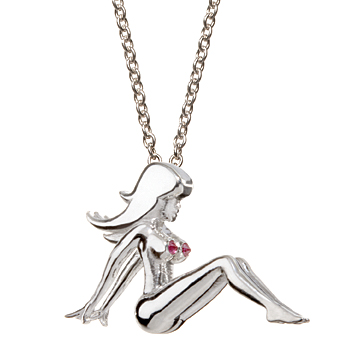 Read about the inspiration for the Mud Flap Jill design here. Yes, her name is Jill.

UPDATED TO ADD: Last night, Amy Schumer wore a Vivienne Westwood dress, Tom Ford shoes, and an OB tampon to the Emmys, but not a single piece of jewelry. Because I understand you have to pay to play the red carpet game, I tweeted her an offer she’d be a fool to refuse.

Yo @amyschumer we jewelry designers would love it if u wore some #emmysjewelry in '17 & if you pick mine I will give u a box of OB tampons!

There you have it: Proof that I did the right thing and tried to bribe a celebrity for the sake of my business!