The phrase “crisp white shirt” has always set my teeth on edge. As I wrote in 2009:

“I hate the fact that everyone feels obliged to use the word ‘crisp.’ Can’t it just be a white shirt? Does it always have to be crispy?“

But I also say “Never is the next new thing™,” and last week I had an urge to wear my one white shirt. I literally thought, “It’s hot out, and I’ll feel crisp in this.”  Instead, I sweated through the shirt before I even left my apartment and I felt crumpled and bulky all evening.  Crisp white shirts and I are simply not meant to be.

At least my destination felt cool. MrB and I had drinks with friends at the second-floor bar in the Baccarat Hotel. The hotel is right across from the Museum of Modern Art, so if you’re in the ‘hood, check it out.

The bar at @baccarathotels in #NYC …. #roses #crystal #chic

On the way home, MrB — oblivious to my sartorial discomfort — said, “I like that shirt. Is it new?” I was like, “Dude, I got it when we went to St. Tropez for Scott and Isabelle’s wedding.” He said, “Oh, I remember when that was … [puzzled pause] … that was 2008!” MrB does this kind of thing a lot. If I were the star of an old-fashioned sitcom about a husband and wife, I would take advantage of this trait of his by buying a whole new wardrobe and telling MrB that it’s all 10 years old.

I’m just not that kind of gal, though.

When I got the shirt, I got a vest to go with it. I wore the combination once, but now I wear the vest separately. The vest is more my style. 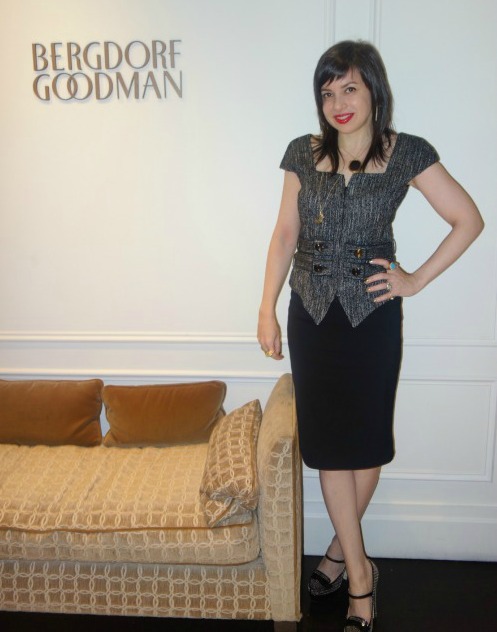 For a while, I thought I got that in 2007, but the link to the St. Tropez trip finally popped into my mind. Now I’m quite sure of the 2008 date, but it’s homegrown vintage either way.