I’ve said it before and I’ll say it again: Consignment is the biggest business challenge for fine-jewelry designers. I’m not sure if there’s any other business where a retailer with annual revenues in the billions of dollars will “order” from $1,000 to $250,000 of high-value product from a one-person company and not pay one cent in return for an indefinite period of time.

In 2013, I explained that consignment translates to “Give us all your jewelry and we’ll pay you when this sells … if it sells.” (I should have added this retailer postscript: “Oh BTW we don’t guarantee we will even display the free jewelry in the store while we hold onto it ha ha ha ha ha.”)

Last year, the Financial Times more soberly described consignment as “where the retailer pays the wholesale price after the sale, returning any unsold pieces.” And there will definitely be unsold pieces. As designer Melanie Georgacopoulos told the FT: “… if the stores aren’t buying, they simply don’t put that much effort into selling.”

Sure, some apparel designers start by placing a few pieces on consignment, but that’s something that they usually grow out of. Retailers might not pay clothing companies fairly or in a timely way, but there is an understanding that the clothes need to be paid for eventually. Based on the promised payments, a clothing designer can borrow money from factors in order to have enough cash flow to produce a collection.

Independent fine-jewelry designers are on their own, financially. Because the retailers haven’t committed to paying anything, there are no future sales against which the company can borrow. 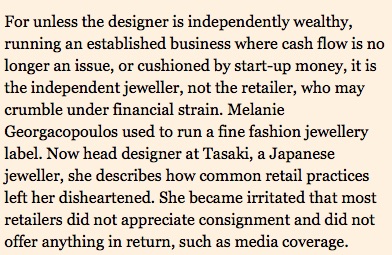 Many of us have gone along with consignment anyway in return for “exposure.” However, as I’ve written before, people can die from exposure in more ways than one. You can’t pay your mortgage with press clips (not that any store has gotten me any meaningful press) or buy the gold you need for your work with a story about how you’re in a hot little boutique that’s popular with discount-seeking celebrities. It’s not just newer designers that are affected. The jeweler Henry Dunay founded his design house in 1953; when the company sought bankruptcy protection in 2011, the filing noted that the majority of Dunay’s assets were held “on consignment with Neiman Marcus Group.”

Luckily, the growth of social media — from blogging to Facebook, Twitter, Pinterest, Snapchat and so on — has enabled many of us designers to reach our gorgeous customers directly. Traditional retailers aren’t the only way to find designers anymore and not only can clients find us, they can talk to us! I’m always happy to answer questions about my designs. Hell, I’ll answer emails in the middle of the night. Find me a sales associate who is going to take a picture of the back of a necklace for you after store hours!

Retailers should be studying what technology did to the music business, especially to record labels. I need to give a lot of credit to retail-industry publication JCK, which has been bold about pointing out the changes afoot in the industry, including this piece that Jennifer Heebner wrote in December. Jennifer’s story starts with her anti-consignment advice to jewelry designer Marla Aaron. I met Marla this January at Jewelers of America’s GEM Awards.

The reason consignment is on my mind is because of Marla Aaron. She recently messaged me asking me to take a look at some text she’d added to her website’s contact page. She said, “I think you will get a kick out of it or think I’ve just lost my mind.”

Guess what? I got a BIG kick out of this:

“A Special Note to Retailers: If you are a store and would like to come visit us and see the collection, please call Rebecca at (646) 799-1434. We would love to show you everything. And feed you cake — because we do that too. While we would love to be in every store in the world, we can only be in the ones that pay us. Which means that we can’t do consignment.”

Imagine, someone in my business saying she wants to be paid for her work! I was so thrilled that I said I’d join Marla in stating this policy clearly on my own contact page. (I had to omit the cake part, because I don’t bake, but I don’t mind running out to get some Dunkin’ Donuts.)

I did want to know what prompted Marla to make such a firm statement at this particular time, seeing as she had already been moving away from consignment, and she emailed me:

“The genesis of my doing this came after a ‘hot’ store made an appointment, came here, spent over 2 hours. I was clear that I don’t do consignment and she said she bought and took lots of pictures and I created an estimate (​all this stuff takes time)  And then they tell me that they would be happy to have the work if it were consignment. So I realized at that point that I should just be even clearer about this.”

Now Marla is focusing on retailers that invest in product, like the one whose owner told Marla: “If I don’t own it, I won’t sell it.”

I’ve been poking around trying to figure out how the fine-jewelry consignment situation got so out of control. I haven’t found a history of it yet, but I did stumble across a great Arts Business Institute post from 2011 that explained why artists shouldn’t do consignment in a way that applies to fine jewelry (and probably pretty much anything else you’d like to sell). I especially appreciated the suggestions for partnering with retailers in a more constructive and fair way.

Retailers: Wendy welcomes the opportunity to partner with you. However, she will no longer work on a consignment-only basis. If you’re a retailer who is ready to invest in Wendy the way she will invest in you, let’s talk beautiful jewelry! Contact info@wendybrandes.com for linesheets and other information.

You might also like
Wednesday's Video: So, You Wanna Start a Jewelry Biz!
Wednesday's Video: BS Your Way Through a Business Plan
JCK Ponders Amazon's Potential for Jewelry Sales
Previous Post: « What Wendy Wore: Ossie Clark to See Shakespeare
Next Post: The Week in Review »